Fatima Not Yet Fulfilled and Still Foreboding (Part V)

Editor’s Note: The Fourth Part discussed the Message of La Salette and Marie-Julie Jahenny’s prophecy concerning Three Days of Darkness. Connected with this topic, we recommend the article “Catholic Prophecy and Hope for the Future” by David Rodríguez, in the most recent edition of The Fatima Crusader (Issue 126 – Winter 2020).

More on the Three Days of Darkness

Other prophecies about the Three Days of Darkness are mentioned in The Reign of Antichrist, by Rev. R. Gerald Culleton (Tan Books, 1974). Blessed Anna Maria Taigi (d. 1837) says this:

“A very thick darkness shall envelop the earth during three days. … All the enemies of the Church, secret as well as known, will perish over the whole earth during that universal darkness, with the exception of some few, whom God will soon after convert. The air shall be infested by demons, who will appear under all sorts of hideous forms. … During this darkness artificial light will be impossible. Only blessed candles can be lighted and will afford illumination. He who out of curiosity opens his window to look out or leaves his house will fall dead on the spot. During these three days the people should remain in their homes, pray the Rosary, and beg God for mercy.”

“God will make use of the power of darkness in order to root out the followers of Sects and godless who want to shake and destroy the foundation of the Church … They will be punished by the cruelty of demons and die a tragic and barbarous death. Hereupon the grand triumph of the Catholic Church will follow and all stream into the fold of the Catholic Church, and recognize the Pope as the representative of God.”

One last three-days prophecy from The Reign of Antichrist that I will mention is this, by Palma Maria Addolorata Materelli (d. 1863):

“Supernatural prodigies which shall appear in the heavens. There shall be three days’ darkness. Not one demon shall be left in hell. They shall all come out, either to excite the wicked murderers, or to dishearten the just and shall cause the death of large multitudes of incredulous and wicked men.”

With that number of specific prophecies from holy persons about the same event, it would seem to be foolish to ignore them all. I, for one, will not be stepping outside during those three days! If Julie-Marie Jahenny is right, however, we will have plenty of warning before it comes.

The Great Monarch and Reforming Pope

Another prominent prophecy recorded in The Reign of Antichrist concerns the French Monarch said to rule the world near the end of time. Rabanus Maurus (d. 856) said this:

St. Paul says in 2 Thessalonians 2:7: “For the mystery of iniquity already worketh; only that he who now holds, do hold, until he be taken out of the way.” This is what is holding back the Antichrist from appearing in the world. Traditionally, what is understood to be holding him back is the Roman Empire. Combining that with the prophecy above, it appears that the French Monarch is the last one who will hold back the Antichrist and when he is gone, the Antichrist will finally appear.

The book Prophecy for Today, by Edward Conner (Tan Books, 1884), has a chapter entitled “The Great Monarch and the Angelic Pastor,” which is entirely dedicated to various prophecies about the French Monarch and Reforming Pope. These prophecies include:

St. Hippolytus (d. 235) – “The Great French Monarch who shall subject all the East shall come around the end of the world.”

Monk Adso (d. 992) – “Some of our teachers say that a King of the Franks will possess the entire Roman Empire. This King will be the greatest and last of all monarchs, and after having prosperously governed his kingdom he will come in the end to Jerusalem and he will lay down his scepter and his crown upon the Mount of Olives. This will be the end and consummation of the Empire of Rome, and immediately afterwards Antichrist will come.”

St. Caesar of Arles (d. 543) – “This prince [French Monarch] shall extend his dominion over the entire universe. At the same time there will be a Great Pope, who will be most eminent in sanctity and most perfect in every quality. This Pope shall have with him the Great Monarch, a most virtuous man, who shall be a scion of the holy race of the French kings. This Great Monarch will assist the Pope in the reformation of the whole earth.”

Venerable Magdalene Porzat (d. 1850) – “An enormous bird (Great Monarch) shall awake as from a sleep, and with its terrible bill and claws shall sever the ox’s neck and shall eagerly devour the intestines of the wicked dragon. He shall drag to the mud the tricolor (revolutionary) flag of the French and restore to their dominions the legitimate kings. A just and pious man born in Galicia shall be the Supreme Pontiff; then the whole world shall be united and prosperous. One faith only and one emperor shall reign over the whole earth.”

The book Trial, Tribulation & Triumph, by Desmond A. Birch (Queenship Publishing, 1996), also contains various prophecies about the French Monarch, the Three Days of Darkness, and the Era of Peace, including:

St. Methodius (d. 311) – “A day will come when the enemies of Christ will boast of having conquered the whole world. They will say: ‘Christians cannot escape now!’ But a Great king will arise to fight the enemies of God. He will defeat them, and peace will be given to the world, and the Church will be freed from her anxieties.”

Venerable Bartholomew Holzhauser (b. 1613) – “The fifth period of the Church, which began circa 1520, will end with the arrival of the Holy Pope and of the powerful Monarch who is called ‘Help From God’ because he will restore everything.”

Nursing Nun of Belay (19th century) – “A saint raises his arms to Heaven; he allays the wrath of God. He ascends the throne of Peter. At the same time, the Great Monarch ascends the throne of his ancestors. All is quiet now. Altars are set up again; religion comes to life again. What I see now is so wonderful that I am unable to express it.”

Yet another prophecy comes from Blessed Elizabeth Canori Mora. In the early 1800’s, shortly after the French Revolution, Our Lord appeared and told her that the crimes in the world and in the Church had reached a peak and that He was going to send a chastisement. Elizabeth pleaded for mercy, in part by agreeing to spend nine days in hell as an act of reparation. Our Lord relented, saying that He would send several holy Popes who would be firm in the teaching given to the Apostles. However, He also said that Freemasonry would rise again and that it would be so successful that He would have to then send the chastisement so that all would not be lost.

It was also revealed to Blessed Elizabeth that an ecclesiastical crisis would occur in the future and would progress to the point where it would seem that the Church had disappeared. A small number of lay persons and clergy would defend it against a larger number trying to destroy it by introducing devastating changes. At the peak of the crisis there would be two Popes. The true Pope would be forced to leave Rome and would be murdered in exile, leaving the Church without a head. Shortly after that time, the chastisement (Three Days of Darkness) would be sent to eliminate the enemies of God. The minority of mankind who were left would then be led by a Pope, born near Rome, appointed by St. Peter himself, and known as “Peter the Roman,” which is the phrase given to the last Pope in the line of the prophecy of St. Malachy.

VATICAN CITY, Oct. 5, 2018 – After arriving in the Eternal City around midday on the Feast of…
byMatt Gaspers 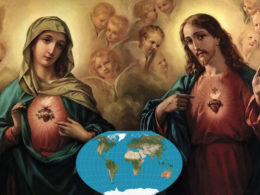 At Fatima, 24 Nations Consecrated – or Entrusted – to the Sacred and Immaculate Hearts

Prayer at Fatima The Catholic News Agency (CNA) website reported on March 25, the Feast of the Annunciation…
byAndrew Cesanek
82 shares
82
0
0
0
No comments 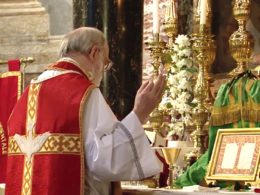 Spiritual Significance of the Priest Praying the Our Father at Mass