Fatima Not Yet Fulfilled and Still Foreboding (Part IV)

Editor’s Note: The Third Part discussed various prophecies of future events that don’t fit Robert Sungenis’ view: the Errors of Russia spreading through every country in the world, including the USA; Our Lady at Akita, Japan (1973); Venerable Mary of Agreda (1600’s); and Our Lady of Good Success at Quito, Ecuador (1634).

The Message of La Salette

Our Lady of La Salette appeared to two shepherd children, Maximin and Melanie, in 1846 and gave them messages about what would happen in the world, even to the time of Antichrist. Robert Sungenis mentions this apparition in his book, Fatima Fulfilled But Still Foreboding, but he tries to confine it to a narrow time and place. The messages written by the children to Pope Pius IX were supposedly found in the Vatican archives in 1999.

Maximin’s message has this in it: “Then, after that, a great peace will come, but it will not last a long time. A monster will come to disturb it.” Melanie’s message has something similar: “A great king will go up on the throne, and will reign a few years. Religion will re-flourish and spread all over the world, and there will be a great abundance … Lastly, hell will reign on earth. It will be then that the Antichrist will be born of a Sister, but woe to her!”

The common thread is that there would be a period of “great peace” wherein religion and nature would abound, but it would end with the arrival of the “monster/Antichrist.” You would think that the monster and the Antichrist mentioned in the messages would be the same person since the messages were given by Our Lady at the same time, but Robert tries to make them into different people.

Turmoil, Peace, then The End

There is a book entitled, Sister Mary of the Cross, by Fr. Paul Gouin, which contains a longer, although more controversial, message from Melanie, including the following prediction:

“At the first blow of His thundering sword, the mountains and all Nature will tremble in terror, for the disorders and crimes of men have pierced the vault of the heavens. Paris will burn and Marseilles will be engulfed. … And then Jesus Christ, in an act of His justice and His great mercy, will command His Angels to have all His enemies put to death. … And then peace will be made, and man will be reconciled with God. … This peace among men will be short-lived. Twenty-five years of plentiful harvest will make them forget that the sins of men are the cause of all the troubles on this earth. …

“Rome will lose the Faith and become the seat of the Antichrist. … The Church will be in eclipse, the world will be in dismay. But now Enoch and Elias will come, filled with the Spirit of God. … Enoch and Elias will be put to death. Pagan Rome will disappear. … It is time; the sun is darkening; only faith will survive. … He [Antichrist] will be smothered by the breath of the Archangel Saint Michael. … And then fire and water will purge the earth and consume all the works of men’s pride and all will be renewed.  God will be served and glorified.”

The unmistakable sequence in that message is that a period of great disorder will be brought to an end all at once, and then there would be a short period of great peace. After the period of peace, the disorders would return and Antichrist would come, along with Enoch and Elijah. The bodily return of Enoch and Elijah during the reign of Antichrist is also mentioned by Blessed Anne Catherine Emmerich and corresponds with the mention of the “two witnesses” in St. John’s Apocalypse 11:3-10. The Bible says that they were both taken up without dying, which is also described in some detail by Blessed Anne in The Life of Jesus Christ, who said they are in Paradise, not Heaven.

Blessed Francis Palau had a vision on December 8, 1866 (described in My Relations with the Church, Chapter 19), as he made his way to the Vatican in Rome, in which an angel told him: “I am waiting for the angel who guards the throne of the supreme Pontiff in the Vatican from the demons to rise up and chain the dragon and his angels and shut them up in the abyss; and then with the tip of my sword I will cut off the crowned heads and armed horns of the dragon in one day.” Then, the angel guarding the Pope told Blessed Francis: “I am waiting for the Supreme Pontiff, and you with him, who has the chains just as I have to tie him [Satan] up, and the keys to lock him up, you have the same power, the same mission as to tie and chain the demons and shut them up in the abyss.”

This is a further confirmation that the Pope will at some point do something that will allow the angels to chain Satan and his angels all in one day. That vision would seem to be the fulfillment of Apocalypse 20:1-3, which can be taken to be an indication of a period of peace, although not a literal 1,000-year reign of Christ on earth.

It is interesting to note that probably the most revered saint of Russian Orthodoxy in modern times, St. Seraphim of Sarov, prophesied an eighth Ecumenical Council after the Communist revolution against the Orthodox Church and the monarchy (which he also predicted). This is remarkable, since it showed that St. Seraphim recognized that the Orthodox were not capable of holding an Ecumenical Council since the split with Rome and that the future Ecumenical Council (also predicted by Venerable Holzhauser) must therefore include the Pope of Rome and the Catholic bishops.

One other event that is supposed by many to precede the period of peace before the end of the world is the Three Days of Darkness. Robert Sungenis thinks that this is just a misinterpretation of Scripture, which does speak of the world going dark at the end of the world, but there are various, specific other prophecies about it.[1] For example, Our Lord revealed to Marie-Julie Jahenny[2] on January 4, 1884:

“There will be three days of physical darkness. For three days less one night, there will be a continual night. The blessed wax candles will be the only ones that give light in this terrible darkness: only one will suffice for three days, but in the homes of the wicked, they will not give any light. During these three days and two nights, the demons will appear under the most hideous forms. You will hear in the air the most horrible blasphemies. The lightning will enter your homes, but will not extinguish the candles; neither wind, nor the storm can put them out … The famine will be great. Everything will be in turmoil and three-quarters of men will perish.”

There is a small book devoted to the prophecies concerning the Three Days of Darkness (The Three Days’ Darkness, by Albert J. Hebert, 1986) and what individuals can do to be prepared for and survive those days. In that book, various details surrounding the event are given, such as:

Marie-Julie Jahenny said that it would occur on a Thursday, Friday, and Saturday. It would be preceded 37 days earlier by two days of darkness. Before that time, there would be one day of darkness, and another day with a period of darkness.

[1] There are numerous Scriptural prophecies about darkness covering the earth, that it’s hard to understand how anyone can dismiss them all as a misinterpretation. Just to list a few: Is 31:10; Joel 2:10,31; Ezek 32:7-8; Acts 2:20; Apoc 6:12; and then there are Our Lord’s own words in the Gospel (Mt 24:19; Mk 13:24; Lk 21:25). In addition to prophecy, there are scriptural types for the darkness. For example, there were three hours of darkness when Our Lord was crucified. Also, the ninth plague afflicting Egypt was the darkening of the sun for three days (Ex 10:21-22). 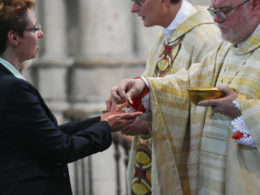 The Truth About Communion in the Hand

“Out of reverence for this Sacrament, nothing touches It but what is Consecrated” – Saint Thomas Aquinas In…
byJohn Vennari
12 shares
10
0
2
0
No comments 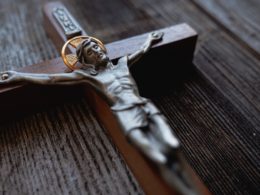 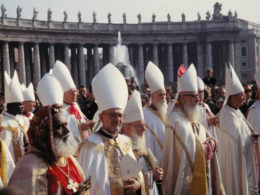 The Italian journal Bussola Quotidiana, in a piece by Giuliano Guzzo, has reported the news — at this…
byChris Ferrara
No comments