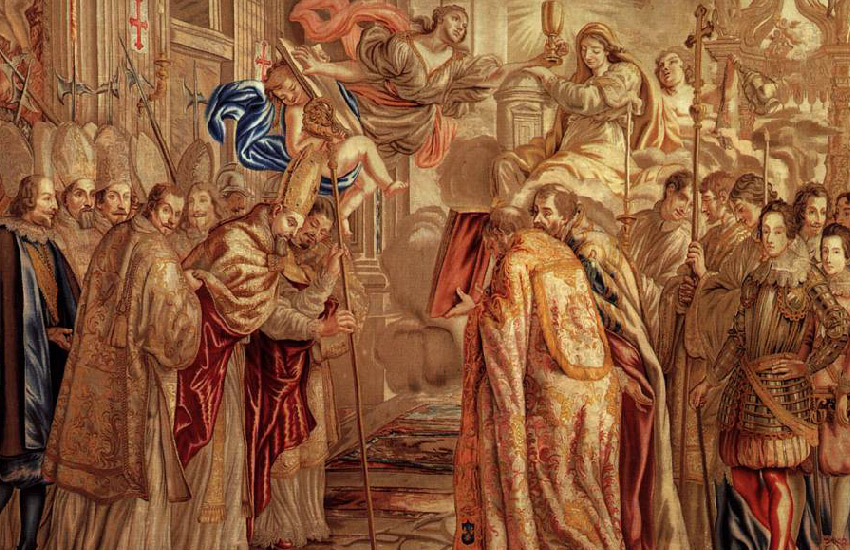 The Importance of Church Consecrations

On this, the Twelfth Day of Christmas, The Fatima Center wishes you a blessed Feast of the Epiphany!
Sts. Balthazar, Melchior and Caspar, pray for us!

“Terrible is this place: it is the house of God, and the gate of Heaven; and it shall be called the court of God” (Genesis 28:17)

The meaning of the word “terrible” is derived from the Latin word terrere, meaning “awesome” or “awestruck,” signifying the amazement one should feel in the presence of Almighty God, the Creator and Ruler of the Universe. However, far from seeming awestruck, modern man often forsakes reverence and downplays the grandeur of God Who dwells among us in the tabernacle. If we truly believe in the Real Presence, how can we not be reverently silent in a church? How can we not genuflect and adore God Whose Flesh and Blood are before us? How can we not make frequent trips to the closest church to pray before the Lord?

St. Elizabeth Ann Seton said it best when she eloquently remarked, “God is everywhere, in the very air I breathe, yes everywhere, but in His Sacrament of the Altar He is as present actually and really as my soul within my body; in His Sacrifice daily offered as really as once offered on the Cross.”

The Consecration of a Church

As discussed in a previous article, there is a distinction between blessings and consecrations. The Roman Pontifical mentions five consecrations: bishops, altars, altar stones, churches, and chalices along with patens. Having previously considered the consecration of chalices and patens and why such sacred vessels must be handled with the greatest reverence and respect, we turn now to churches.

The ceremonies for the consecration of a church are elaborate and beautiful, underscoring that these structures are truly consecrated for God’s worship alone and that they must never be defiled.[1] For that reason, to sin inside a church is a greater sin. It was Our Lord, after all, Who overturned the moneylenders’ tables when they sought to profane the Temple, showing us that God’s house on this earth is to be treated with utmost respect.

Those who have not witnessed the Consecration of a Church should read the prayers for this ceremony. Among the ceremonies performed is the recitation of the seven penitential psalms, the invocation of the saints, the procession around the church building in imitation of Joshua, and the striking of the door by the crosier. Ashes are spread across the floor of the church, and the bishop, in a particularly symbolic part of the ceremony, uses his crosier to write out the letters of the Greek alphabet in the ashes on one line before inscribing the letters of the Roman alphabet in the ashes on the other side. He also blesses the holy water and consecrates the altar, which involves various anointings with holy oils and setting the altar stone in the altar. He also fashions incense into five cross candles which are lit and burned into the altar in a particular dramatic scene.[2]

In which part of the ceremony is the church actually consecrated, though? What is the essence of the consecration? On this point, the Catholic Encyclopedia teaches:

“The essence of the consecration of a church consists in the anointing of the (12) twelve crosses on the inner walls with the form: ‘Sancificetur et consecretur hoc templum,’ etc. According to a decree of the Sacred Congregation of Rites dated April 12, 1614, if before this ceremony the consecrator should become incapacitated for finishing the function, the whole rite must be repeated from the beginning. These crosses are not to be of wood or of any fragile material. They must never be removed (Cong. Sac. Rit., 18 February, 1696), and documents failing, they serve to prove that the church has been consecrated. Under each cross a bracket holding a candle is affixed.”

These ceremonies, which often take several hours to perform before the start of the actual Mass, are essential in setting aside the building for the worship of the One True God. As the Catholic Encyclopedia further advises:

“By a decree of the Council of Trent (Sess. XXII), Mass should not be celebrated in any place except a consecrated or blessed church. Hence it is the wish of the Church that at least cathedrals and parish churches be solemnly consecrated, and that smaller churches be blessed (Cong. Sac. Rit., 7 Aug 1875), but any church and public or semi-public oratory may be consecrated (Cong. Sac. Rit., 5 June 1899). Both by consecration and by blessing a church is dedicated to Divine worship, which forbids its use for common or profane purposes. Consecration is a rite reserved to a bishop, who by the solemn anointing with holy chrism, and in the prescribed form, dedicates a building to the service of God, thereby raising it in perpetuum to a higher order, removing it from the malign influence of Satan, and rendering it a place in which favours are more graciously granted by God (Pontificale Romanum). The blessing of a church is a less solemn rite, which may be performed by a priest delegated by the diocesan bishop. It consists in the sprinkling with holy water and the recital of prayers, thus making it a sacred place, though not necessarily in perpetuum. Consecration differs from mere blessing in this, that it imprints an indelible mark (St. Thomas, II-II:34:3) on the building by reason of which it may never be transferred to common or profane uses.”[3]

Fasting Before a Church Consecration

Among the casualties of the past 60 years has been a loss of fasting. As previously mentioned, fasting has continued to wane to its present nearly non-existent level through a series of weakening measures and dispensations that began several centuries ago. One of the aspects of fasting that had been retained until only recently before the Second Vatican Council was the notion that those who request a church to be consecrated, in addition to the bishop, should fast and implore God’s mercy the preceding day. As such, the day before a consecration used to be a required day of fasting. Father Dominic Prummer, in Moral Theology published in 1949, states: “On the day previous to the consecration of a church both the Bishop and the people who ask for the church to be consecrated must fast. This is laid down in the Roman Pontifical.”[4]

Anniversary of the Consecration of a Church or Cathedral

Traditionally, the anniversary of the consecration of a diocese’s cathedral is observed as a significant feast day in churches throughout the diocese. Written in 1908, the Catholic Encyclopedia underscores the importance of this anniversary:

If more people were to keep the anniversary of their parish and their cathedral as days of celebration in their families, would that not bring us in greater connection to the Church as a whole? How many of us even know the anniversary date when our parish or cathedral was consecrated?

It is so important that we honor and protect Catholic churches and help fund the construction of beautiful ones since God Himself dwells in them. He is truly present on the altar and in the tabernacle. For this reason, Catholics should piously make the Sign of the Cross even when they drive past a church, out of respect for the Real Presence. And we should visit them and pray before Our Lord present in the tabernacle whenever possible. Honor God by honoring that which is consecrated to Him. Honor your parishes and help us build up the kingdom of God brick by brick as we rediscover our venerable traditions.

[1] For the English translation of ceremonies of the consecration of a church in the traditional form, see https://acatholiclife.blogspot.com/2009/09/ceremonies-of-consecration-of-church-in.html

[2] Fr. Nikolaus Gihr, in The Holy Sacrifice of the Mass: Dogmatically, Liturgically and Ascetically Explained, writes: “In the prayers for the consecration of the altar reference is made to the Holy of Holies of the Old Law, to the stone-altar of Jacob, to the place which the blood of Abel sprinkled, to the spot where Isaac was to be immolated, to the altar on which Melchisedech offered sacrifice, and to that which Moses built; — our altar, therefore, recalls the places of sacrifice on which the figurative sacrifices were offered up. — It is also a figure of that venerable table at which Christ celebrated the Eucharistic Sacrifice and Banquet; it also bears allusion, moreover, to the sepulchre in which the wounded and sacrificed Body of Christ reposed, and likewise to the Cross, where in the fullness of time the bloody sacrifice of the Redemption was accomplished, and is the mystical Golgotha upon which the Sacrifice of the Cross is mystically shown forth and renewed.”

[4] Canon E. J. Mahoney, in Priests’ Problems published in 1958 by Benzinger Brothers, clarifies: “The persons who ask for their church to be consecrated might be, for example, the Chapter of a collegiate church, the members of a religious community to whom the church belongs, and the parish priest. No doubt, in some instances, all the parishioners might come under the description…but normally they do not since it is a ceremony which chiefly concerns the clergy, and the request is usually made by them.”

[5] It is interesting to note that the Catholic Encyclopedia also notes the difference between consecrated and merely dedicated churches by distinguishing how their anniversary celebrations were handled: “Another difference in the effects of the two forms of dedication is that a consecrated church is entitled to celebrate each year the anniversary feast of its consecration, which is to be held as a double of the first class with an octave, by all the priests attached to the church. A church that is only blessed has no right to this anniversary feast unless per accidens, that is, when it is included in the special indult granted for the simultaneous celebration of the anniversaries of all the churches in a district or diocese. In this case the Office and Mass must be celebrated in every church, within the limits of the indult independently of their consecration (Cong. Of Rites, n. 3863). Though any day may be selected for the dedication of a church, yet the Roman Pontifical suggests those ‘Sundays and solemn festive days’ which admit the dedicatory Office and Mass, as well as the anniversary celebration.”

[6] This practice may still be performed even today as shown by Father Edward McNamara, LC in his article published at https://www.ewtn.com/catholicism/library/candles-where-the-walls-were-anointed-4777