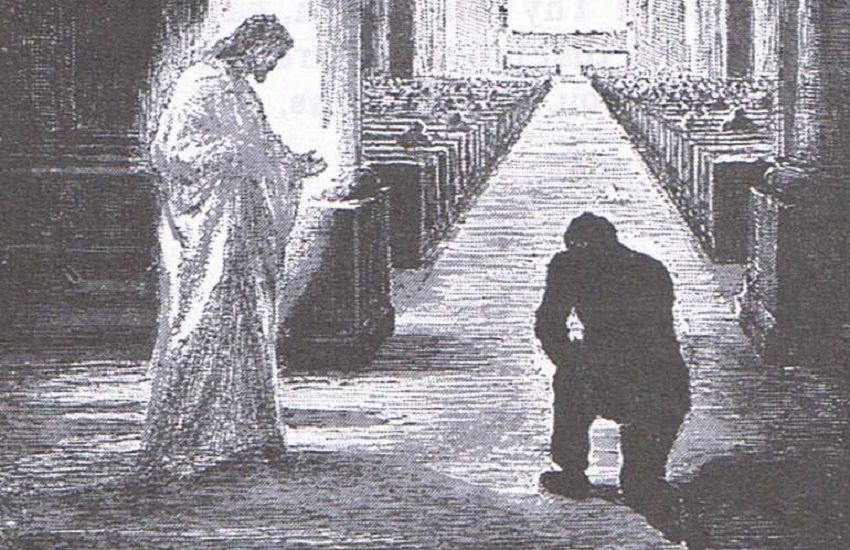 When people go to church, once inside they are seen bending down on one knee before entering the pew. That is genuflecting. But all too often people don’t realize why we genuflect or the proper means to make a true genuflection.

Why Do We Genuflect?

We do this out of respect for the Lord Who is truly present before us. If a king or president was seated in front of us, we would respectfully acknowledge his presence; a bow is quite customary. The same is true yet in a much greater sense regarding the Lord, Who is the King of Kings, Who is really present in the Eucharist within the tabernacle. So, when we enter a Catholic church and before we sit down, we genuflect not toward the pew but toward the tabernacle. Genuflections should always be made while looking at the tabernacle and with a realization and internal acknowledgment that God Himself resides in that tabernacle. A laudable and pious devotion is to make the Sign of the Cross and a silent act of faith at the moment of genuflection. It could be as simple as “My God, I believe Thou art present” or “My Lord, I love Thee” or “Blessed be the Holy Trinity.”

What Is the Proper Way to Genuflect?

Single Genuflection: If the Lord is within the tabernacle it ought to have a covering of cloth and there will be a lit red candle in the sanctuary. [Editor’s note: It is generally a white candle in a red glass container.] If you see this, the Lord is indeed present and anytime you walk past the front of tabernacle, you ought to genuflect. This is also true if you walk from one side of the church to the other. So it’s not about entering the pew before Mass – it’s about crossing the sight of the Lord in the tabernacle. However, it is also proper to genuflect when we arrive and leave Our Lord’s presence, which is why we do make a genuflection when we enter the pew upon arriving and when we exit the pew to leave. 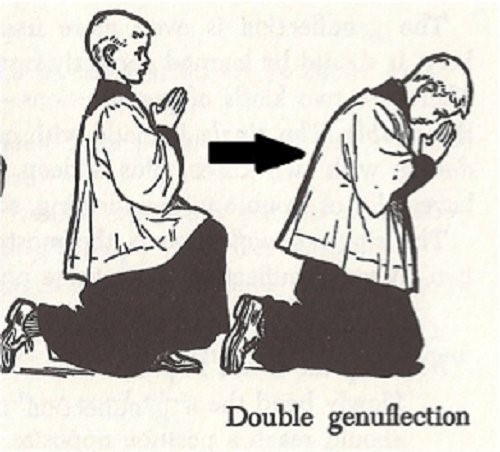 Double Genuflection: This is done by bending down on both knees (kneeling) and profoundly bowing. When is this done? When the Lord’s true Body and Blood in the Eucharist is out of the tabernacle and exposed on the altar (usually in a monstrance). On such occasions, it is fitting to make a double genuflection. If you see people going to Eucharistic Adoration, or you see people leaving Mass early while the Holy Eucharist is still exposed upon the altar, make them aware that out of respect for God and out of obedience to the laws of the Church, a double genuflection is to be made.

Other Times to Genuflect

There are also times during the Mass when the rubrics require a genuflection to be made.[i] It is customary to genuflect when the Mystery of the Incarnation is mentioned during the Mass, for example during the Creed (et incarnátus est de Spíritu Sancto ex María Vírgine: et homo factus est) and during the Last Gospel (et verbum caro factum est). This act of reverence is also performed at a moment in the Te Deum and at some Gospel readings during the year – i.e., the reading of the Passion on Good Friday.