Editor’s Note: Dear Reader, please keep in mind that in the USA, today is a Day of Prayer and Penance. 49 years ago today the Supreme Court of the United States falsely declared that murdering an innocent child in the mother’s womb is her “right” (Roe vs. Wade). Our nation has and will suffer terrible consequences from this horrific abomination. We must offer reparation for this grave crime against God, the Author of All Life, and do what we can to abolish this diabolic act.

Our Lady of Fatima, pray for us!
Most Sacred Heart of Jesus, have mercy upon us and on our nation!

“Be sober and watch: because your adversary the devil, as a roaring lion, goes about seeking whom he may devour.” (1 Peter 5:8)

SATAN’S FINAL BATTLE AGAINST THE FAMILY

Sr. Lucia reportedly said that the devil’s final battle would be against the family.[1] In commenting on a letter written by her, Cardinal Caffarra said: “In that letter we find written: ‘The final battle between the Lord and the kingdom of Satan will be about Marriage and the Family.’ Don’t be afraid, she added, because whoever works for the sanctity of Marriage and the Family will always be fought against and opposed in every way, because this is the decisive issue. Then she concluded: ‘nevertheless, Our Lady has already crushed his head’.” [emphasis added]

So we should expect satan and his minions to unceasingly work at the dismantling and destruction of the family. In fact, malevolence against the family and the upturning of God’s right order within the family is one of satan’s tell-tale marks.

The COVID-19 restrictions have also worked against the family in several ways. The vaccine mandates have caused many people to lose their jobs. This results in the loss of income and health care insurance for families. Even worse, it creates a great deal of stress within families and exacerbates every problem. Even secular outlets are reporting that the ‘pandemic’ has yielded a spike in divorce rates. Police reports all over the country also show a marked rise in violent domestic abuse. Pornography, screen-addition, and alcohol and substance abuse – all maladies which ravage the family – are also on the rise. Since people are so focused on the virus and vaccine issues, many liberal governments have used this as an opportunity to pass without notice much legislation in support of the LGBT agenda.

More people are struggling with depression, and suicide rates – even among the young – are at all-time highs. In 2021, there was a significant increase in deaths among people of working age.[2] In fact, the top two causes of death in that age group were fentanyl overdose and suicide.[3] It is quite likely that the fentanyl deaths were caused in large part by reactions to the COVID-19 restrictions. The executive director of the Northern Shenandoah Valley Substance Abuse Coalition, Lauren Cummings, also said that the COVID-19 stimulus payments were correlated with it: “We saw an increase in overdoses after the first round of stimulus payouts.”

Shortages in resources and employees have caused logistical nightmares in the shipping industry. Business shutdowns have also forced many people to lose their jobs, as have the unlawful vaccine mandates. Remote learning has caused a marked decrease in learning among students. In an increasing number of countries like Australia, Austria, Canada, France, Italy, and the Philippines, the unvaccinated are practically shut out of society altogether.

Face mask mandates have been especially hard on children due to the fact that: 1.) very young children need to see the entire face in order to develop their ability to recognize people, 2.) a significant part of verbal communication is dependent on seeing the mouth of the person talking, 3.) wearing a face mask decreases the amount of oxygen that a person inhales, and 4.) bacteria can form on a face mask which a person will be constantly rebreathing. It is disturbing to drive by a playground and see children in face masks, especially when they essentially have no risk of death from the COVID-19 virus. It is unethical to vaccinate children with a product that has been shown to cause so many bad reactions.

Reactions to the COVID-19 vaccine, as reported in the VAERS database, have been much more prevalent than any other vaccine.[4] Fetal deaths and deformities are up drastically. Young athletes are dropping out of sports and even dropping dead. In Canada, it has been shown that infections, hospitalizations, and deaths from COVID-19 all soar in the days and weeks after people receive their first vaccine dose.[5] Scientific reports with well-documented data from various nations have shown that the vaccine and boosters are not able to prevent infection and transmission. Even the World Health Organization[6] and the vaccine manufacturers are now admitting the same.[7]

There is much talk about the World Economic Forum’s “Great Reset.”[8] Klaus Schwab, Founder and Executive Chairman of World Economic Forum, said: “The [COVID-19] pandemic represents a rare but narrow window of opportunity to reflect, reimagine, and reset our world.” They have every intention of changing how everyone in the world lives, or dies. Klaus Schwab supposedly also said: “You will own nothing and be happy.” As Anthony P. Mueller, a professor of economics, warns: “The main thrust of the forum is global control. Free markets and individual choice do not stand as the top values, but state interventionism and collectivism. Individual liberty and private property are to disappear from this planet by 2030.”[9]

President George H. W. Bush was one of the first politicians to utter the phrase “new world order” in public, when he did so on September 11, 1990.[10] Just before the start of the endless wars in the Middle East, he said: “Once again, Americans have stepped forward to share a tearful good-bye with their families before leaving for a strange and distant shore. At this very moment, they serve together with Arabs, Europeans, Asians and Africans in defense of principle and the dream of a new world order. That’s why they sweat and toil in the sand and the heat and the sun.” I doubt very much that the thousands of ground troops who fought in those wars had any dreams of a “new world order.” It has only turned out to be a nightmare which still haunts us today.

The Vatican is also fully behind the Great Reset. Pope Francis is constantly meeting with world leaders hell-bent on implementing their plans for the remaking of society.[11] His silence on religious persecution in China, together with his approval of various communists, tells you whose side he is on.

It is particularly disturbing, and should raise many alarms, to see that global secular leaders, who are avowed atheists and promote every manner of immorality, are being joined lock-step in their assessment of this crisis by Vatican officials and chanceries all over the world. The only reasonable conclusion to a person of faith and of good will is that the prophecies Our Lady made at Fatima are being fulfilled. Russia has indeed spread her errors throughout the world. There will be wars, famine, and terrible persecutions. We must all wake up to this reality and heed Our Lady’s requests at Fatima, for Only She Can Help Us Now.

This article will be concluded in the third part, as we discuss The Choice which stands before us all.

[6] In a recent report, WHO made this bomb-shell statement: “a vaccination strategy based on repeated booster doses of the original vaccine composition is unlikely to be appropriate or sustainable.” [emphasis added]

[7] Albert Bourla, Pfizer Chairman and CEO, stated in an interview with CNBC: “The hope is that we will achieve something that will have way, way better protection, particularly against infections because the protection against the hospitalizations and the severe disease, it is, it is reasonable right now, with the current vaccines as long as you are having let’s say the third dose.” [emphasis added]

Note: Bourla calls this a “hope” and acknowledges that better protection is needed than what his product offers. In other words, his product does not work as well as advertised. Even more telling, he states the protection against ‘severe disease’ is ‘reasonable’ at present. What is the precise definition of “severe disease” and how can “reasonable” be evaluated in this situation? All the terms he uses are very loaded and very telling.

Fatima Perspectives #1365 In his “Urbi et Orbi” Message on Christmas Day, Pope Francis could not, of course,…
byChris Ferrara
14 shares
14
0
0
0
No comments

Fatima Perspectives #1346 “Who knows what evil lurks in the hearts of men?  The Shadow knows!”  Thus spake…
byChris Ferrara
21 shares
21
0
0
0
No comments 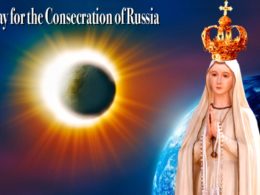 THE 105th ANNIVERSARY OF THE MIRACLE OF THE SUN

Today we celebrate the 105th anniversary of the Miracle of the Sun[1] which took place at Fatima, Portugal…
byDavid Rodríguez
4 comments 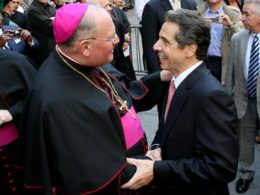