“Be sober and watch: because your adversary the devil, as a roaring lion, goes about seeking whom he may devour.” (1 Peter 5:8)

The phrase “Dissolve and Coagulate” is a term used by alchemists and Freemasons.[1] It basically means destroy what you have and rebuild something out of it – much like “Build Back Better.” The phrase “new world order” or “Novus Ordo Seclorum” (New Order of the Ages – phrase on the back of the U.S. dollar bill) implies that the old order must be abrogated. Even the Novus Ordo Mass implies the same thing. The recent Motu Proprio (a term which means ‘on my own initiative’) out of the Vatican makes that clear.

But what was the “old order” of things? Christendom, of course! The Freemasons, who were generally businessmen who did not like the Church and the monarchies limiting their activities, targeted them for destruction. World Wars I and II got rid of the monarchies. Even today, any strong national leader is targeted for elimination. It can be argued that Donald Trump was cheated out of his second term as U.S. President. The presidents of Burundi, Swaziland/Eswatini, Tanzania, Ivory Coast, and Haiti were recently killed. President Jair Bolsonaro of Brazil is under constant attack. Putin of Russia is under pressure from NATO. Bashar Hafez al-Assad of Syria has only barely managed to maintain control of his country, mostly due to Russia’s support. In years past, Saddam Hussein of Iraq, Muammar Gaddafi of Libya, and the Shah of Iran were forced out of power and died very shortly thereafter.

The ideas of ecumenism and synodality are neutering the Papacy. Two men simultaneously holding the title of “Pope” and wearing white creates great confusion. The Third Secret of Fatima attests to that: “… a Bishop dressed in White. ‘We had the impression that it was the Holy Father.’”[2] Supposedly, Melanie of La Salette said that when Our Lady told her that the Church would be in eclipse, in part it meant that it would be difficult to tell who was the Pope. The prophecies of Our Lady of Good Success are coming true: “… Satan will reign almost completely by means of the Masonic sects.”[3]

After having gotten rid of every strong national leader and neutering the Pope, the plan is to have a one-world government under the UN, or other international body, and have all religions united under the UR (United Religions) with the Abrahamic Family House[4] set to open in 2022. That way, the Masonic sects will run everything. Of course, they are all just minions of the devil who hates the family and the Church. Since any one religion will be as good as another, satanism will be allowed and even encouraged.

The destruction of the value of all national currencies will usher in the global, electronic currency. Your vaccine passport will grant you access. Without it, you will have no access. That sounds much like the “mark of the beast” described in the Book of the Apocalypse. A combination of a limited nuclear war, a global economic collapse with food and power shortages, and more viral pandemics will convince most people to take the path of least resistance and just go along with the program. Simulations have been run for each of those scenarios and so world leaders know just how people are going to react. Even if it will not be the literal reign of Antichrist to occur immediately before the end of the world, it will be a good foreshadowing.

St. Angela Merici said: “Disorder in society is the result of disorder in the family.” We are seeing that to the extreme today where there is a very serious lack of virtue. We seem to be at the point which Melanie of La Salette described in this way:

“God will strike in an unparalleled manner. Woe to the inhabitants of the earth! God will exhaust His anger, and no one will be able to escape so many evils at once. The heads, the leaders of the people of God, have neglected prayer and penance, and the devil has darkened their minds; they have become those wandering stars which the ancient devil will drag with his tail to destruction. God will permit the ancient serpent to sow divisions among rulers, in all societies, and in all families; both physical and moral punishments will be suffered. God will abandon men to themselves and will send chastisements one after the other for over 35 years … Society is on the very eve of most terrible scourges and greatest events; one must expect to be governed by a rod of iron and to drink the chalice of God’s wrath.” [5]

What we see being played out on the world stage today is mostly a rejection of God’s laws. It has created a veritable hell on earth. The isolation and fear felt by many people is just a reflection of what will be experienced in hell if God’s laws are rejected until the end.

Prophecies suggest that this current situation will continue to get worse until God finally decides to put an end to it with the Three Days of Darkness, which I would argue will occur right after the Consecration of Russia. At that point, Melanie of La Salette said that God will put all His enemies to death. If all God’s enemies are put to death, then the only ones left will be His friends.

That would logically then be the start of the period of peace promised by Our Lady of Fatima. A consensus among Catholic prophecies indicates a French Monarch and a great reforming Pope will rule during this age. During this same time there will be a worldwide devotion to the Immaculate Heart of Mary, as it will be manifestly clear that God brought about this restoration specifically through Our Lady’s intercession. The public Consecration of Russia would certainly make this clear to the world. So, keep praying your daily Rosary and making the Communion of Reparation every First Saturday!

[4] The Abrahamic Family House – which includes a church, a synagogue, and a mosque in a single complex – is being built in Abu Dhabi, the capital of the United Arab Emirates. 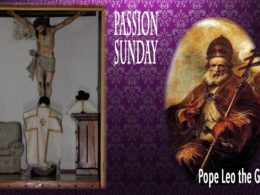 Passiontide Begins – And We Have No Mass

KEEP THE LORD’S DAY HOLY Today we enter into Passiontide. The vast majority of us will not be…
byDavid Rodríguez
No comments

Vatican Commission Implies that the Vast Majority of Catholic Marriages Are Invalid: Annul Away!