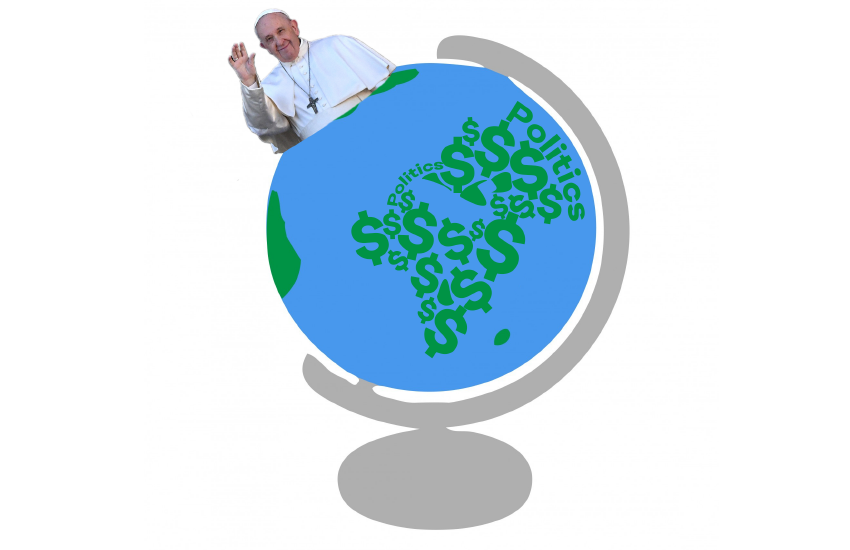 Pope Francis and the Great Reset

In our last article (A Primer on the Great Reset), we spoke of the general principles of the Great Reset, and how this coronavirus crisis is being used to push the globalist agenda that is sweeping the globe. As a quick summary, it is worth noting that the Great Reset is in essence a contemporary instantiation of a slew of freemasonic ideals that include everything from economic upheaval, to climate initiatives, to population control. Overall, what we are dealing with is something akin to a “modernist” world initiative. Modernism is the synthesis of all heresies, and as a corollary we might say that the Great Reset is the magnum opus of modernism applied to the socio-political-economic sphere, which is why it seems like a veritable mélange of all possible political ideals that work against the Natural Law and the Common Good of souls.

Sadly, we may say the same thing about Pope Francis, a pope who embodies the spirit of modernism in a way that perhaps no other pope has done – at least not as brazenly as Francis. We need not go over the litany of theological ambiguities and errors that have stemmed from this papacy, but they are legion. In addition, the Holy Father often throws his hat into the political ring, calling on the world to enact the same policies that can be seen throughout the yammerings of Great Reset pioneers.

Who can forget his encyclical Laudato Si’, which implores the world to take strict action against a changing climate, focusing on ‘highly essential initiatives’ like limiting the usage of air-conditioners.[1] Furthermore, Francis makes sure to cite the 20th century ‘apostle of modernism,’ Teilhard de Chardin, S.J., as he espouses his theological gobbledygook: “The ultimate destiny of the universe is in the fullness of God, which has already been attained by the risen Christ, the measure of the maturity of all things.”[2]

The recent Vatican-approved Global Compact on Education comes off as a conference on the tenets of Freemasonry applied to education, which has led us to ask questions concerning the Pope’s obvious affinity for the Lodge. In any case, it seems like the current pontificate is a cog in the wheel of the Great Reset mechanism. If this truly is the case, could there be links between Pope Francis and the men behind the reset-curtain?

A main actor at the helm of the Great Reset movement is a man named Klaus Schwab. He is the founder and executive chairman of the World Economic Forum (WEF), which is more or less a globalist economic think-tank that seeks to influence world economic policy. Almost as if a real-life parody of a classic Bond-villain, Schwab promotes a combination of cockamamie theories which are bent on turning the world into a globalized economy based on technocratic dystopian fantasies. He even speaks English with a German accent that is so typical that one wonders if a Hollywood actor is auditioning for a WWII period-piece every time he speaks. Schwab and his associates speak of the ‘new modern man’ being updated to trans-human. I’m not sure how humans can be ‘trans-human,’ but it appears they would prefer men to be soul-less cyborgs.[3]

At any rate, Schwab and his organization facilitate the meeting of economic bigwigs at Davos, Switzerland each year. It is a typical elitist event, with the world’s most influential people – heads of state (or their representatives), business leaders, and billionaires – sharing ideas about how to best mold the world to their whims. In some ways, it is just an event for fantastical ideas that will never be implemented, but now it seems that its goals are becoming more and more probable.[4]

Currently, the WEF is promoting the idea that we “must build entirely new foundations for our economic and social systems,” in order to deal with the economic fallout from the pandemic hysteria. You may have heard the catch-phrase ‘build back better,’ which is meant to get us all enthusiastic about this diabolical initiative.[5] Concurrently, the Holy Father echoes the sentiment of Klaus Schwab and company in a recent essay that appeared in the New York Times: “God asks us to dare to create something new. We cannot return to the false securities of the political and economic systems we had before the crisis.”

As troubling as this is, it is not the first time that the Pope has expressed his support for WEF-inspired ideas. Since at least 2014, Francis has been sending his support to the annual WEF meeting at Davos, usually with a Cardinal bringing the unholy ‘gospel’ of the New World Order (NWO) with him. As you can imagine, the messages from the Holy See to Davos have the same ring of ambiguous pseudo-globalism that seems to be at the heart of most political statements that Pope Francis utters. In fact, in January of this year, the Holy Father sent a letter, including the following statement, to Schwab in Switzerland: “As a result, it is necessary to move beyond short-term technological or economic approaches and to give full consideration to the ethical dimension in seeking resolutions to present problems or proposing initiatives for the future” [emphasis added].

With all that has transpired since earlier this year, it makes you wonder if the Pope was not privy to the coming economic calamity that seems to have been a well-known secret amongst the global elite.

On November 19, 2020, the Vatican launched the “Economy of Francesco” event in Assisi. It is a virtual event which seems to meld his Global Compact on Education, the environmentalism of Laudato Si’, and his call upon the Youth to wreak havoc, with the economic and political agenda of the WEF. This will be the subject of our next article.

Yet, it should not surprise us that the WEF sounds like the Pope or that the Pope sounds like the WEF. All grace flows into the world through the Catholic altar. It has been a long time since Rome has shown that they have the fullness of faith, and the Church has suffered from scandal and heresy as a result. Due to these unfortunate realities, the world is in a state of diabolical control, manifested in NWO-themed organizations like the WEF (and others).

Ultimately, as Saint Paul reminds us in Ephesians, the battle is between Heaven and hell, between the faithful and fallen angels, between good and evil (cf. 6:11-17). It is a spiritual struggle, and as long as the font of Divine Grace is stifled by a Church in crisis, we must hope in Divine Intervention to right the ship.

Let us call upon the intercession of Our Lady of Fatima, so that finally the Consecration of Russia to the Immaculate Heart of Mary may be accomplished.

[1] “55. Some countries are gradually making significant progress, developing more effective controls and working to combat corruption. People may well have a growing ecological sensitivity but it has not succeeded in changing their harmful habits of consumption which, rather than decreasing, appear to be growing all the more. A simple example is the increasing use and power of air-conditioning. The markets, which immediately benefit from sales, stimulate ever greater demand. An outsider looking at our world would be amazed at such behaviour, which at times appears self-destructive.” – Laudato Si’

[2] Paragraph 83, Laudato Si’. Note the pagan and pantheistic overtones of this statement, namely that the whole universe is somehow essential to the fullness of God. The truth is that God created out of nothing and no amount of change or evolution in the universe can ‘improve’ God. Moreover, God will actually destroy this created world at the end of time (de fide) and create a New Heaven and a New Earth (also infallible dogma).

[3] A ‘cyborg’ is a fictional notion denoting a being with both organic and biomechanic body parts. The idea is that by fusing men’s organs, bones, muscles – and even the brain – with technological inventions, an improved man (cyborg) can be created in a laboratory. They believe that by doing this they eliminate many ‘unwanted’ aspects of man’s nature and are then able to give man ‘eternal life’ by preserving his memories and character on a silicon microchip. Note the prideful audacity in these ideas; such men wish to take on the role of gods and believe they can create something better than what God has made! If this fantasy ever becomes reality, it will be a terrible nightmare, more akin to the evil ‘Borg’ creatures of the Start Trek fantasy series, which utterly lack goodness, beauty, and truth.

[4] Among other things, “Schwab announced the World Economic Forum’s Great Reset Initiative in June 2020, which includes stripping all people of their privately owned assets.” In addition, “Schwab and his globalist accomplices are using the COVID-19 pandemic ‘to bypass democratic accountability, to override opposition, to accelerate their agenda and to impose it on the rest of humankind against our will. Ultimately, the Great Reset will result in two tiers or people: The technocratic elite, who have all the power and rule over all assets, and the rest of humanity, who have no power, no assets and no say-so in anything.’ … Schwab’s book, ‘COVID-19: The Great Reset’ also urges industry leaders and decision makers to ‘make good use of the pandemic’ and ‘not letting the crisis go to waste.’” (emphasis added; https://childrenshealthdefense.org/defender/globalist-technocrats-great-reset-plan/?utm_source=salsa&eType=EmailBlastContent&eId=7567c856-e5e4-4025-b60c-c8c7485fa5d7)

[5] For those with eyes to see, this global “build back better” sounds very much like what was done within the Church in the aftermath of Vatican II. Everything had to be updated and revised because ‘modern Catholics’ simply couldn’t be expected to believe and practice the Faith as their forefathers had done prior to the two world wars. All the ‘new’ things were supposed to be far better. Yet, we have seen that the Catholic Church has been decimated in the decades since then, and the Church Militant is now a shell of what it was just a few generations ago. We should all realize that this “build back better” initiative will bring about analogous disasters in the social, political, and economic spheres.

[6] At the 2013 World Youth Day in Rio de Janeiro, Pope Francis told the young people of the world: “¡hagan lío!” Some commentators have benignly translated this as “make noise,” but it means much more in Spanish. Hoodlums who run around the streets destroying things are more aptly described by this phrase. It really means: rebel and cause chaos and destruction.