“I give My Face as a sensible object of My sorrow for the sins of man.”

Today’s feast (established throughout the universal Church in 1958 by Pope Pius XII, to be observed on the Tuesday before Ash Wednesday[1]) is a beautiful and precious opportunity to make reparation for the outrages that the Holy Face of Jesus received during His Passion, and which He continues to receive daily in the Sacrament of the Holy Eucharist. Our Lord Himself requested this moving devotion by which the faithful unite themselves with Him in His sorrow through special acts of reparation to His Holy Face.

On the first Friday of Lent in 1936, Our Lord appeared to Sister (later Mother) Maria Pierina de Micheli in the Convent of the Immaculate Conception in Rome, as she was praying in the convent chapel. His face covered with blood and bearing an expression of profound sadness, He said to her: “I desire that My Face, which reflects the deep anguish of My Soul, and the sorrow and love of My Heart, be more honored! He who contemplates Me, consoles Me…”

On Tuesday of Passion Week of that same year, Our Lord again requested that souls meditate upon His Holy Face: “Each time My Face is contemplated I will pour My Love into hearts, and through My Holy Face many souls will be saved.”

Two years later, in 1938, while Sister Pierina was praying in the chapel, the Immaculate Virgin appeared to her holding a scapular made of two pieces of white flannel, joined by a cord. On one side was the image of the Holy Face with the words: “Illumina, Domine Vultum Tuum Super Nos” (Let Thy Face shine upon us, O Lord!) surrounding the image. On the other side was an image of a Sacred Host surrounded by rays of light, having the words: “Mane Nobiscum Domine” (Stay with us, O Lord) surrounding the image.

The Blessed Virgin told Sister Pierina: “[T]his scapular is a weapon of defense, a shield of strength, a pledge of love and mercy which Jesus wishes to give to the world in these times of sensuality and hatred against God and the Church. Diabolic snares are being laid to tear the Faith from men’s hearts, and evil is spreading. True apostles are few, a Divine remedy is necessary, and this remedy is the Holy Face of Jesus.

“All those who shall wear a scapular like this [later the Blessed Virgin told her that a medal could be used instead], and will make, if possible, a visit to the Blessed Sacrament every Tuesday, in reparation for the outrages that the Holy Face of My son Jesus received during His Passion, and which He receives daily in the Sacrament of the Holy Eucharist, will:

Later that same year, in November 1938, during Adoration of the Blessed Sacrament, Our Lord again appealed to Sister Pierina, saying:

“I desire that It be honored by a special Feast on Tuesday in Quinquagesima (Shrove Tuesday – the Tuesday before Ash Wednesday). The Feast will be preceded by a Novena in which the faithful make reparation with Me, uniting themselves in participating with Me in My sorrow.”

Following the example of Mother Pierina, the faithful can console Our Lord greatly by making special visits to the Blessed Sacrament, especially on Tuesdays, and praying five Glory Be’s in reparation for the outrages which the Holy Face of Jesus received during His Passion, and which He continues to receive every day in the Sacrament of the Holy Eucharist. Outrages such as:

– Sacred Hosts being stolen, and even used sacrilegiously;

– Lack of reverence by baptized Catholics when in the presence of the Blessed Sacrament and the Tabernacle;

– Receiving Holy Communion in the state of mortal sin;

– Men in Sacred Orders permitting, even encouraging (!), those in grave public sin to receive Holy Communion;

– Receiving Holy Communion in the hand instead of on the tongue;

– Receiving Holy Communion while standing instead of kneeling (for those who are able);

– Trampling on Our Lord present in the particles of the consecrated Hosts dropped on the floor because of Communion in the hand;

– Lay people usurping the priest’s role (for which his hands have been consecrated) of administering the Blessed Sacrament;

– Irreverence and indifference toward Our Lord in the Blessed Sacrament.

Download the Novena in Honor of the Holy Face of Jesus

[1] Regrettably, this feast – along with so many other glorious feasts – was eliminated in the liturgical calendar promulgated in 1962 and it was kept off the liturgical calendar which accompanied the new order (novus ordo) of the Mass in 1969. Consequently, many Catholics today remain ignorant of so wondrous a feast specifically requested by Our Lord. 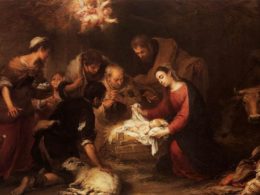 The Fatima Center wishes you and yours a Blessed and Holy Christmas and a Happy New Year. Fatima…
byChris Ferrara
No comments 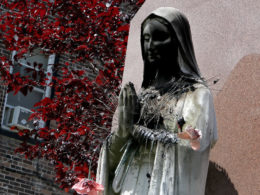 Catholicism Is Under Attack Today!

The Third Apparition of Our Lady of Fatima and the Crisis in the U.S.A. “Continue to pray the…
byAndrew Cesanek
58 shares
58
0
0
0
No comments

Cardinal Müller Frets: The Church “Will Be Destroyed” if The Bishops Don’t Act. Isn’t There a Pope in Rome?

Fatima Perspective #1199 Regarding the meeting at the Vatican over intercommunion for Protestant spouses of Catholics in Germany,…
byChris Ferrara