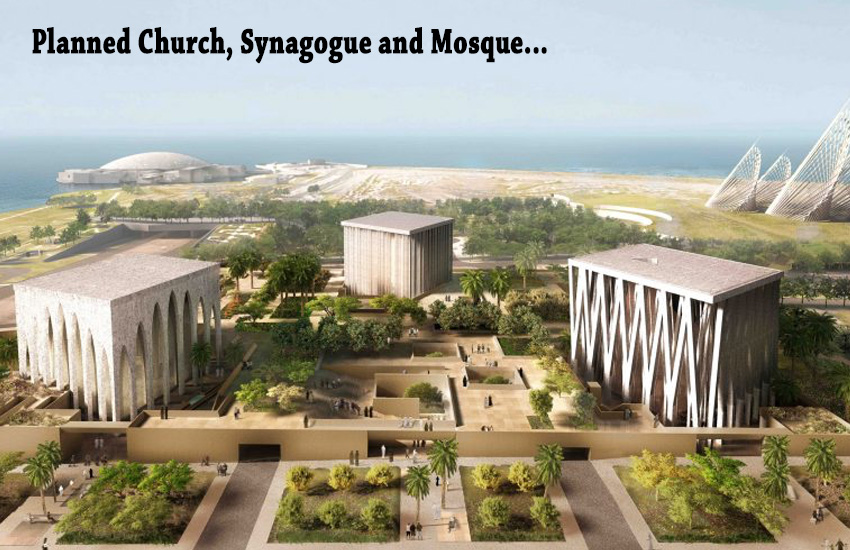 The “Abrahamic Family House”: End Stage of “the Great Movement of Apostasy”?

In the document that has come to be known as the Abu Dhabi Statement, Pope Francis, jointly with the “Grand Imam of al-Azhar Ahmed el-Tayeb”, declares that “The pluralism and the diversity of religions, color, sex, race and language are willed by God in His wisdom…” Despite his private statement to Bishop Athanasius Schneider that he (the Bishop) could tell people that by “willed by God” the Pope meant only God’s permissive will, every public indication by Francis since the scandalous Statement was issued is to the contrary, as shown here.

And now the news emerges that the aforesaid “Higher Committee,” in which Catholic participation is provided by no less than the Pope’s personal secretary, Monsignor Yoannis Gaid, has met to discuss plans to build in Abu Dhabi “The Abrahamic Family House.”  This syncretic project will involve the construction, on a shared foundation, of a Catholic church, a mosque and a synagogue.  As the linked source describes it, “The mosque will be orientated toward the Kaaba in Makkah, the church’s altar will point east towards the sun, and the synagogue’s podium and Torah will face Jerusalem.”

This is no mere concept, but an already approved and awarded project (the architect is one Sir David Adjaye) “that is due to be completed in 2022.”  Nor will it be limited to three religions. The president of the Pontifical Council for Inter-religious Dialogue, Cardinal-elect Miguel Angel Ayuso Guixot, one of many Modernist termites with whom Francis has infested the College of Cardinals, revealed that the “Higher Committee” is “working to broaden the number of faiths that could eventually be included.”

The result will be a syncretistic theme park in which all religions would have their place and be seen on equal footing.  It will be the Rome of a One World Religion.  It would, in fact, be the very fulfillment of the fear expressed by Pope Saint Pius X in Notre Charge Apostolique, the historic condemnation of the syncretistic Sillon movement in France conspicuously absent from the Vatican website:

“And now, overwhelmed with the deepest sadness, We ask Ourselves, Venerable Brethren, what has become of the Catholicism of the Sillon? Alas! this organization which formerly afforded such promising expectations, this limpid and impetuous stream, has been harnessed in its course by the modern enemies of the Church, and is now no more than a miserable affluent of the great movement of apostasy being organized in every country for the establishment of a One-World Church which shall have neither dogmas, nor hierarchy, neither discipline for the mind, nor curb for the passions, and which, under the pretext of freedom and human dignity, would bring back to the world (if such a Church could overcome) the reign of legalized cunning and force, and the oppression of the weak, and of all those who toil and suffer.”

Note well the sainted Pope’s warning about “the reign of legalized cunning and force, and the oppression of the weak, and of all those who toil and suffer.”  For this project is part of the Vatican’s programmatic attempt under this Pope to integrate the Church into a world order in which the United Nations would be the highest authority.  Don’t believe it?  Here is what Francis said on the subject during one of his airborne press conferences:

“I would like to repeat the doctrine of the Church, that international organizations, when we understand we give them the ability to judge internationally. We think for example to the international court of AJA, and many times also the United Nations, when they speak. If we are a humanity we should obey.”

If “we are a humanity” we should obey the United Nations!  Not Christ and His Church — no, Francis would never say that — but dictates emanating from the Tower of Babel on the Hudson River, including (of course) its dictates on the subject that evidently concerns this Pope far more than the salvation of souls and the life of the world to come: “climate change.”

What is the “Abrahamic Family House” if not the advanced stage in “the great movement of apostasy being organized in every country for the establishment of a One-World Church,” which Saint Pius X saw rising in 1910, seven years before the Blessed Virgin appeared at the Cova da Iria?

How does one avoid the conclusion that a great movement of apostasy is at work even within the Catholic Church — an apostasy that “begins at the top,” as the Third Secret warns us?

How can one not see looming over the world precisely “the reign of legalized cunning and force” to which even the Vatican now lends itself?

Father Gruner was mocked and derided as a “prophet of doom.”  But now we see that he was no prophet. He was simply a priest who heeded the prophetic warnings of the Mother of God at Fatima.