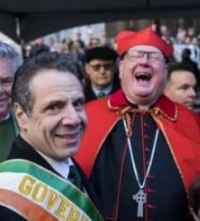 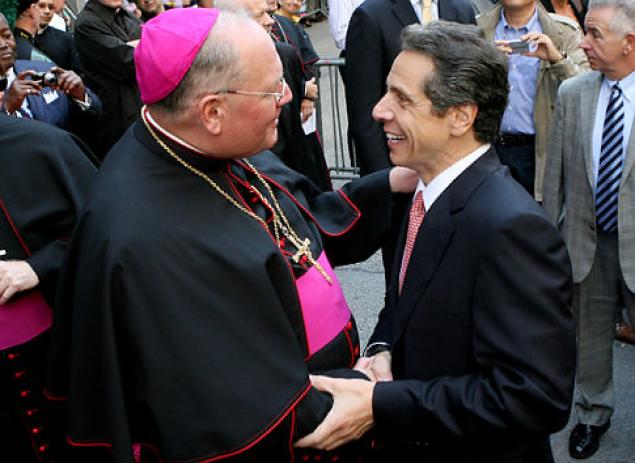 Andrew Cuomo, the ostensibly Catholic Governor of New York, has signed into law a   “Reproductive Health Act” that allows for abortions up until the moment of birth, authorizes even non-doctors to butcher the unborn child in the womb, and strikes the crime of feticide from New York’s criminal law.  In a hideously ironic twist, the same pretend Catholic had already vowed to end the death penalty for convicted killers in New York in “solidarity with Pope Francis.”  The same Pope Francis, by the way, who has demanded worldwide abolition of the death penalty but never called for worldwide abolition of abortion.

Cuomo has publicly bragged about his unwavering opposition to the Church’s infallible teaching on marriage and procreation: “I’ve experienced that all my political life. I experienced that when I said a woman had a right to choose. I experienced that at an exponential level when New York was the first large state to pass marriage equality, against the Catholic Church. So they’ve [Catholics] been against me on all of these issues.”

It is long past time for Cuomo — for the good of the Church and for his own good as a soul in desperate need of correction — to be formally expunged from the Church by means of a declared excommunication. At the very least, he must be denied access to Holy Communion pursuant to Canon 915, which provides that Catholics “obstinately persevering in manifest grave sin are not to be admitted to holy communion.”

Enter Cardinal Timothy Dolan, a Hogarthian icon of the corruption-ridden, go-along-to-get-along American hierarchy.  On the news show “Fox and Friends,” under questioning by Steve Doocy, Dolan bobbed and weaved concerning Doocy’s polite demand that he defend the integrity of the Faith against Cuomo’s relentless public onslaught:  “There’s a Catholic governor cheering the fact that abortion would be legal in this state almost to the moment of birth…. There are calls from people in the Catholic Church for Governor Cuomo to be excommunicated from the Catholic Church.”

To which Dolan, who had already made a tasteless joke about his excessive weight, replied: “You’re telling me! I get wheelbarrows of letters every day. I think that would be counterproductive, myself.”

Counterproductive? Doocy reminded the Cardinal that “Well, he’s [Cuomo] not following Catholic doctrine,” to which Dolan replied with the following twisted rationale:

Giving our enemies “ammo” by affirming Catholic teaching on the natural law, which applies to all men!  In other words, Dolan argues that the way to fight the enemies of the natural law is to allow Catholics to trample on it without suffering any consequences.

Clearly perplexed by Dolan’s gibberish, Doocy pressed the Cardinal again: “But the Catholic Church, Cardinal, stands against abortion.  And here is the most prominent Catholic in the State of New York, and he’s saying ‘This is a good thing!’”

To which Dolan responded with more gibberish:

“The cannon laws [sic] which you quoted [Canon 915, evidently quoted off camera]  would also say that you have to use it for medicinal purposes and you think that there is gonna be a good effect that’s gonna come out of this.  We have a governor that brags about it. We have a governor that uses his dissent from Church teaching as applause lines. We have a governor that takes quotes from Pope Francis out of context to draw an artificial cleavage between the bishops of New York and the Holy Father himself.  He’s not gonna be moved by this. So what would be the use?”

So according to Dolan, the correct approach to a “Catholic” politician who wages war on the Church’s teaching regarding the natural law is, in essence, to do nothing because Cuomo would not be moved — as if changing Cuomo’s mind were all that was involved here.

Doocy, however, clearly understood that regardless of how Cuomo’s subjective disposition might be affected, he certainly should not be allowed to commit the objective public scandal that Canon 915 prohibits. Accordingly, he asked Dolan: “What about denying him Communion?”   At which point Dolan began to squirm on camera:

“Well, look, that’s — you’re making me — I don’t rarely get restless, but I am. That’s kind of a pastoral issue that I think one has to talk to him about. And I think proper people have. And I’d be uncomfortable going into that. Rather spiritual and pastoral. But, that is, that’s a good point. Not denying him. He may have already said ‘I cannot approach the holy sacrament.’”

Blah, blah blah.  Dolan’s maundering vainly concealed a cowardly refusal to stand up to a so-called Catholic who publicly boasts of having legislated infanticide and who even had the World Trade Center lighted pink to celebrate his diabolical triumph.

Compare Dolan’s timorous tergiversation with this forthright statement by Cardinal Raymond Burke when he was still the Archbishop of Saint Louis:

Not for Dolan is such honesty and courage in defending the truth against its brazen public enemies, who operate within the sheepfold it is his duty to protect from ravening wolves like Cuomo. Instead, Dolan laughs and shakes hands with the Devil, just as he does annually at his disgraceful Al Smith Dinner, where he sups and yuks it up with the adepts of Moloch who rule a nation that has turned its back on God and is in the final stages of self-destruction.

With shepherds like Dolan, the Church is defenseless. Such is the crisis the Church must now endure.