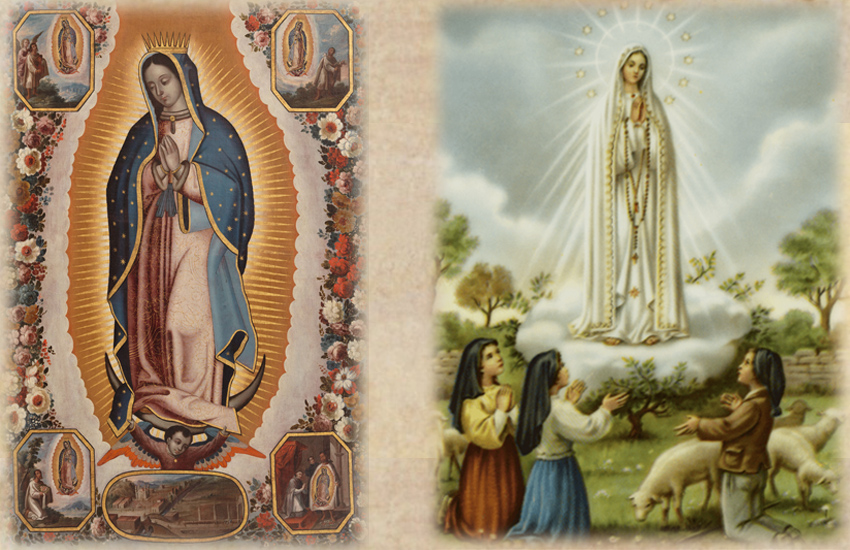 Fatima and Our Lady of Guadalupe

Editor’s Note: If you are unfamiliar with the story of Our Lady of Guadalupe, we suggest reading the original version, translated from Nahuatl into English, called Nican Mopohua, ‘Herein is Told.’ It was written by Antonio Valeriano, a well-educated Aztec from the noble class who became a devout Catholic. He received this narrative directly from St. Juan Diego, writing it down circa 1540. A manuscript copy from 1649, by Fr. Luis Laso de la Vega, is housed in the National Library of Méxcio. The work also goes by the name Huei Tlamahuiçoltzin, or ‘The Great Event.’ We have it posted HERE.

God often uses typology[1] as a very effective and powerful means by which to instruct man and to strengthen him in faith and hope. In fact, all the events of the Old Testament foreshadow the New and look to their perfect fulfillment in Christ. Contemplating Divine Providence in terms of typology is apostolic, as St. Paul often relies upon it (see Gal 4:21-23 and Heb 9 for just a few examples) and is clearly rooted in the Church Fathers. St. Augustine famously wrote, “The New Testament lies hidden in the Old and the Old Testament is unveiled in the New.” Yet typology is not limited to the Sacred Scriptures, for God’s activity is present throughout our history. In honor of Our Blessed Mother, let us briefly consider the wondrous example of typology from Our Lady of Guadalupe to Our Lady of Fatima.

In 1521, Hernán Cortés conquered the Aztec Empire for the Spanish crown. Historian Warren Carroll explains how Cortés and his men knew they were in a life and death struggle against demonic forces. They were horrified by the gruesome ritualistic human sacrifices of thousands, by the human blood savagely drunk by Aztec priests, and by the indigenous’ worship of diabolic idols. According to their own testimony, these men fought for the Cross and were driven by the desire to redeem a kingdom of darkness for Christ.[2]

Nevertheless, the Christians’ effort to evangelize the people of the Americas was proving very difficult and slow going. There was much resistance. Some indigenous would even hide their idols beneath or behind Catholic statues and Crucifixes so as to feign Christian devotion. Authentic conversions were few and far between. Rumors were circulating that the indigenous were organizing a violent rebellion. Confronted by the immoral obstinacy of governing Spanish officials and the ineffectiveness of missionary efforts, Bishop Juan de Zummáraga was at his wits end. The Franciscan bishop had a strong Marian piety and he was fervently supplicating Our Lady‘s succor.

In answer to his prayers, Our Lady appeared to Juan Diego on Saturday, December 9th, the day following the Franciscans’ celebration of Her Immaculate Conception.[3] Although Zummáraga was initially hesitant and Juan Diego skipped an appointment with the Queen of Heaven on December 11th, the great miracle wrought by Our Lady speedily removed all doubt. Obedience was prompt, joyful and complete.

Within two weeks, the chapel requested by Our Lady had been built. A joyous procession, which included the resurrection of an Aztec accidentally pierced through the throat by a stray arrow, carried the supernatural Tilma to Tepeyac Hill. The bishop consecrated the altar with a Mass on December 26, 1531, the feast of the First Martyr, St. Stephen.[4] From that day on, a continuous stream of indigenous pagans came to view and venerate Our Lady’s image. The Franciscans record teams of friars catechizing and baptizing thousands all day long. Over the next ten to twenty years, an approximate eight to ten million indigenous embraced the True Faith.

We also cannot fail to note that this is the same time period when Christian Europe was being torn asunder by the protestant heresies of Luther, Zwingly, Calvin, Henry VIII, et al. An approximate five million Catholics were apostatizing away from the Church and the seeds were being planted for the rationalism[5] and liberalism which characterized the Age of Darkening (delusionally referred to by many as the ‘Enlightenment’). The inevitable progression of these errors, clearly delineated by Pope St. Pius X, is the rise of agnostic Freemasonry, the divorce of Church and State in liberalized democracies, the birth of atheistic communism, and the exaltation of man by modernism. It was as these terrible errors were coming to full fruition that Our Lady appeared at Fatima.

Our Lady’s apparitions at Tepeyac clearly serve as type for Her apparitions at Fatima. Just as the Americas were under diabolic dominion, Christian Europe – and the world – had fallen under the terrible control of Satan. The 19th century was riddled with revolutions that dethroned Christ and rejected His Social Kingship. Pope Leo XIII had warned that Freemasons were no longer concerned with hiding their attacks on the Church. He had also experienced a supernatural vision in which he heard Our Lord grant Satan more time and more power to attempt to destroy the Church. And already in 1903, St. Pius X had written, “Who can fail to see that society is at the present time, more than in any past age, suffering from a terrible and deep-rooted malady which, developing every day and eating into its inmost being, is dragging it to destruction? …  This disease is apostasy from God” (E Supremi, #2).

Our Lady of Guadalupe came when much of Christian Europe was abandoning the Catholic Church; She came to Fatima when the vast majority of the world was rejecting Christ’s true Church. The Blessed Mother came to America when the world was poised to change dramatically on account of geographic discoveries; She came to Portugal when the world was on the verge of changing even more drastically on account of technological discoveries. While Our Lady came to the Americas after they had just experienced war and were on the verge of a potentially far worse one, She came to Fatima when Europe was in the dying throes of The Great War (later to become known as World War I), which would also soon be followed by a far worse war.  A bishop pleaded for Her aid in 1531; similarly, Pope Benedict XV begged for Her heavenly assistance on May 5, 1917.[6]

Our Lady of Guadalupe came with great maternal solicitude saying: “Am I not here who am your Mother? Are you not under My shadow and protection? Am I not your fountain of life? Are you not in the folds of My mantle? In the crossing of My arms? Is there anything else you need?” She taught that if we turn to Her, She has the power to protect us from all dangers. We hear this re-echoed yet in a more intense manner at Fatima, as She lets us know that at this moment in history ‘only She can help us.’ Yet Her Rosary has now been given more power and efficacy by God than ever before. There is no problem, personal, social or global, be it however great, that prayerful recitation of the Rosary and Our Lady’s intercession will not solve. Even now, despite the malevolent torrents which seemingly overwhelm us, She has the unlimited power to protect and save our souls from any and every danger!

[1] A type is any real person, place, thing, or event which prefigures a future reality and it foreshadows a deepening or more perfect fulfillment in the future reality.

[2] I strongly suggest reading Warren Carroll’s Our Lady of Guadalupe and the Conquest of Darkness (Christendom Press, 2004). It is a well-researched work which rebuts many errors popularized today by a secularized and anti-Catholic biased intelligentsia. Too often Cortés and his men are presented as greedy, lustful and evil men who initiated a horrible oppression of a noble people with a pure culture. Few historical narratives are further from the truth. While some of the Spanish conquistadors undoubtedly succumbed to vice, such a caricature is heavily lopsided. The Aztec’s culture was truly one of the most diabolical the world has ever known.

The vast majority of the indigenous welcomed Cortéz’s arrival and helped him defeat their Aztec oppressors. Cortéz’s men witnessed some of their own compatriots, who had been taken prisoners, have their living hearts ripped out and consumed by Aztec soldiers. In 1487, when the Aztecs dedicated their great temple to Huitzilopochtli, their Sun God who demanded human blood in order to make the sun shine, they spent four days brutally killing over 80,000 prisoners of war! A team of priests would rip out the victims’ beating hearts with an obsidian knife and then toss the body down the temple. Rivers of human blood flowed down the Temple. Taken as a whole, Christian civilization brought about inestimable good to the Americas.

[3] Note how the apparition took place on the day of the week dedicated to Our Lady and immediately following one of Her more important feasts. There is a very strong typological correlation between the Guadalupe Apparition, the Immaculate Conception, and the Fatima Apparition. (We briefly explored this connection in a previous article.) At Fatima, Our Lady first appeared in Her month (May) and performed the Miracle of the Sun on a Saturday in the month of Her Rosary.

[5] A great irony is that if anyone honestly looks at the historical and scientific evidence behind the Tilma of Guadalupe, it is undeniable that it is utterly miraculous. Our Lady provided tremendous scientific proof just before the exaltation of human reason and the Age of Science dawned. For example, to this day, the best scientists and artists – with modern technological tools – are unable to explain, let alone reproduce, the tilma. Infrared analysis reveals it has no brushstrokes. The materials of which the colors consist are unidentifiable. The maguey (cactus plant) material should have decomposed within twenty years at best, yet it still exists in perfect condition five hundred years later. Reflections of those in the room when Our Lady appeared have even been found imaged in Her pupils in perfect accordance with optic laws, though these laws were not discovered until the 19th century and Her pupils could not be magnified sufficiently to observe this until the 20th century. Two books on this subject which I strongly recommend are Not Made by Human Hands by Thomas Sennot (Franciscan Friars, 1998) and The Wonder of Guadalupe by Francis Johnston (TAN, 1993).

[6] Our Lady answered both of these prayers promptly and in a manner far beyond what could have been expected. This should serve as a reminder of how powerful are the prayers of a bishop when he seeks Our Lady to accomplish God’s will. Can we imagine how powerful will be the Prayer of Consecrating Russia to the Immaculate Heart of Mary by the Pope in union with all the world’s Catholic bishops!!!

David Rodríguez is the current Content Director for The Fatima Center. After graduate school in engineering, he spent several years in a diocesan seminary and as a novice in a Cistercian monastery before earning his Masters in Theology from the University of Dallas. David has spent more than twenty years working in parishes, directing religious formation, hosting call-in shows on Catholic radio, and supporting Catholic non-profits aimed at recovering and restoring the traditions of our Catholic Faith. He is married and has six children.