As the calamity that is the Bergoglian pontificate continues to expand, thus revealing what the integral Third Secret must have foretold, we note with sadness the passing of the German priest and respected academic and friend of Benedict XVI, Father Ingo Dollinger, this past Trinity Sunday, June 11.

Back in 2009, to the derision of the anti-Fatima, “mainstream” Catholic establishment, this apostolate publicized widely Fr. Dollinger’s revelation that, following a Mass he had just concelebrated in 2000 with the future Pope Benedict, then Cardinal Ratzinger, Ratzinger admitted to him during a conversation in the sacristy that the Third Secret had not been fully disclosed at the Vatican press conference on June 26 of that year.  During that press conference, the Vatican published only the enigmatic vision of the “Bishop dressed in White” without a single word of explanation by the Blessed Virgin but only the laughable, admittedly non-binding “interpretation” of the scandal-plagued Cardinal Sodano, then Vatican Secretary of State, who had absolutely no competence in the matter.

Last year, the web journal One Peter Five broke the major news that Father Dollinger had confirmed to its German-speaking investigator precisely the account reported some seven years earlier by the Fatima Center. This was followed immediately by the Vatican’s clumsy attempt at a denial, wherein Benedict is quoted as having stated: “never to [sic] have spoken with Professor Dollinger about Fatima” — never, not a single word during a decades-long friendship! Obviously, the locution “never to have spoken to Father Dollinger” could not have been a direct quotation of Benedict, despite the misleading use of quotation marks, but merely a characterization of his supposed response. And, tellingly, no effort was made to obtain a denial of the account from its source, Father Dollinger. Instead, the Vatican descended to rank calumny, accusing Father Dollinger of being a liar whose account was “pure inventions, absolutely untrue.”

But Father Dollinger stood by his account.  And, in March of this year, One Peter Five published the direct testimony of Gottfried Kiniger, another friend of the late priest, who confirms Dollinger’s account:

“I do not remember the exact date, but it was still in the year 2000, I am sure about that. I still remember the press conference [about the publication of the Third Secret of Fatima] in Rome, as it was then shown on television. In the fall, I visited again, as usual, Dollinger with whom I am friends for many years. On this occasion, he told me of his having met Cardinal Ratzinger – then Prefect of the Congregation for the Doctrine of the Faith – shortly after that [June 2000] press conference. He even then con-celebrated with him, something which Dollinger usually does not do, but Ratzinger had invited him to do it.”

“After the celebration [of the Holy Sacrifice of the Mass], Dollinger spoke with the cardinal and brought up the topic of Fatima and the Third Secret. Ratzinger told him: ‘What we have published is not the whole secret. [‘Was wir veröffentlicht haben, ist nicht das ganze Geheimnis.’] In the sacristy, there were also present other priests – some of them high-ranking priests – to whom the cardinal had to attend intermittently. But he soon returned to Dollinger and said to him: ‘We were instructed to do so.’ [‘Es ist uns so aufgetragen worden.’]

“This same sentence Dollinger, a second time, repeated: ‘We were instructed to do so.’”

There has been no Vatican denial of Kiniger’s account.

The truth has a way of coming to light, sooner or later, whenever efforts are made to suppress it.  Where a prophecy from Heaven itself is concerned, no human effort at covering it up, no matter how determined, can succeed. That is why the Vatican has never been able to bury the Third Secret of Fatima.

May the eternal light of glory shine upon Father Ingo Dollinger.

Fatima Perspectives #1365 In his “Urbi et Orbi” Message on Christmas Day, Pope Francis could not, of course,…
byChris Ferrara
No comments 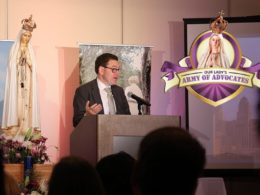 Raising Our Lady’s Banner in Philadelphia

Our Lady’s Army of Advocates gathered in the City of Brotherly Love from November 9 through November 11,…
byThe Fatima Center
6 shares
6
0
0
0 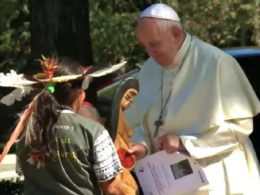 Fatima Perspectives #1350 As is well known in the Catholic world, thanks to the tireless work of Father…
byChris Ferrara
93 shares
92
0
1
0
No comments