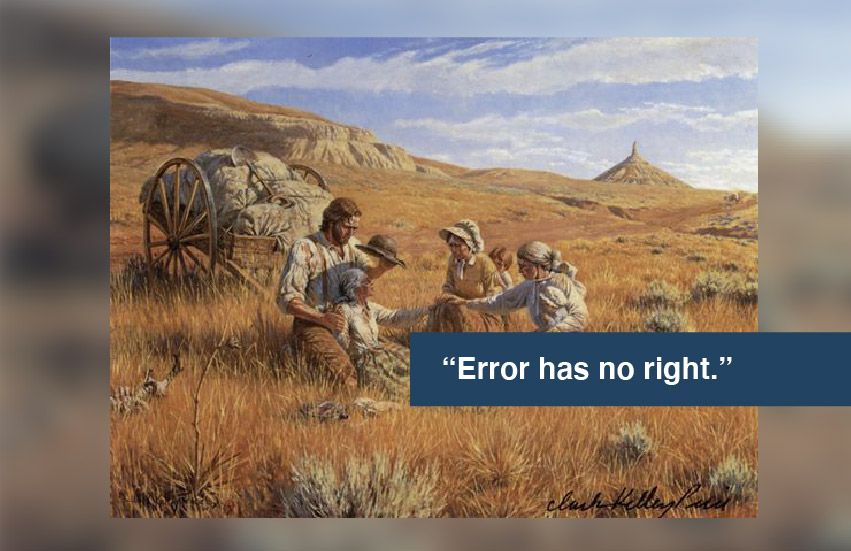 (Read What is the Eucharistic Fast)

If you have ever spent time in Utah or Idaho you will have undoubtedly encountered Mormon temples. While some people may think Mormons are another group of Protestants, they are not. Mormonism, which was founded by a self-proclaimed prophet named Joseph Smith in the United States in the 1830s, is not Christian at all. It is a pagan religion, to which unfortunately over 14 million people adhere, because they do not believe in the Blessed Trinity.

Rather than turning away Mormons or other false missionaries who may come to our doors, it is better if we are empowered with knowledge on the errors of these religions so we can help show them the True Faith. Then, rather than closing the door on such visitors, we can engage them in a fruitful discussion aimed at the truth – but only if one is well prepared to do so effectively.

It may help to remember that only a person who is spreading the truth has a moral right to evangelize, whereas one who spreads errors lacks this moral right. Error has no right. We also do well to recall that by the grace of Confirmation one is called to be a solider for Christ, to defend the faith, and to spread the Gospel – according to one’s reasonable means. So implore the Holy Ghost to fill you with His gifts and to “stir up the grace of God which is in thee” (2 Tm 1:6)!

Grace builds on nature. So it is also a good idea to be familiar with a number of resources which help teach and defend the Catholic Faith. For example, you might consider purchasing some of the inexpensive pamphlets put together by St. Paul’s Street Evangelization and give them out whenever you encounter people who have been deceived by these errors.

To be properly prepared for such a discussion, one should first be familiar with the six fundamental errors of Mormonism, which are listed and explained below.

1. Mormonism Is not Christianity

Mormons do not believe in the Trinity. To Mormons, God the Father is a separate deity from Jesus Christ. In fact, they believe God the Father has a body and lives on a planet near a star named Kolob. They claim their founder learned this from an Egyptian papyrus. The central and most important dogma of Christianity is the Blessed Trinity: One God in three Divine Persons. Mormons reject this truth and thus deny the one, triune God.

2. Mormons Believe God Used to Be a Man

Another one of their errors is the idea of “eternal progression,” which claims that God is not eternally divine. In fact, they claim that God used to be a man who was found worthy to be raised to the rank of God. (But who found this man to be worthy and then raised him to the rank of God?)

So, to them, God is merely a glorified man, who is always evolving into a more exalted being. Thus, He is not as all faithful Catholic theologians would note – perfect, eternal, and unchanging. To Mormons, He is not the same “yesterday, today, and forever” (cf. Heb 13:8). In fact, they believe God has a god above him who has a god above him. This progression continues for infinity. There is no end of “gods” to Mormons.

3. Mormons Claim the Holy Ghost Is Not Worthy of Worship

Mormons claim that the two “gods” – the Father and the Son – are to be worshiped, but not the Holy Ghost. They do not give sufficient explanation as to why, though they also incorrectly believe that the Holy Ghost is a separate god.

4. Mormons Believe in Baptism of the Dead

Baptism requires valid form (the precise words instituted by Our Lord in Matthew 28:19), valid matter (pure water) and proper intention (to do that which the Church does in Baptism). Mormons do not have valid baptisms since they do not have the proper intention and do not hold the same belief in the Trinity – One God in three Divine Persons. The Congregation for the Doctrine of the Faith specifically affirmed the invalidity of all Mormon baptisms in 2001.

Also contrary to the truth as taught by Our Lord and His Church since its very foundation, Mormons believe in baptism of the dead where a living person, acting as proxy, is baptized by immersion on behalf of a deceased person of the same sex.

Mormons claim that even the Apostles got it wrong in some respects. They allege that the True Faith vanished from the earth with the death of the Apostles. They claim that Our Lord Jesus Christ, after establishing His Church in Palestine, appeared in South America and there set up a separate parallel church.

“I am the good shepherd; and I know mine, and mine know me. As the Father knoweth me, and I know the Father: and I lay down my life for my sheep. And other sheep I have, that are not of this fold: them also I must bring, and they shall hear my voice, and there shall be one fold and one shepherd. Therefore doth the Father love me: because I lay down my life, that I may take it again. No man taketh it away from me: but I lay it down of myself, and I have power to lay it down: and I have power to take it up again. This commandment have I received of my Father.” (John 10:14-18)

Before we can understand any passage of Scripture, we have to put it in context. To start, who was Jesus speaking to? He certainly was speaking to the Jews. He was specifically speaking to the Pharisees when He spoke of Himself as the Good Shepherd. And at that time the Jews did not understand or even fathom that salvation was possible for non-Jews. These non-Jews (i.e., who we call Gentiles) would also be saved by Christ’s Sacrifice on the Cross. And in this way, the Good Shepherd would draw all men to Himself – the Jews (those of the fold) and the Gentiles (those not of this fold). And together they would form one sheepfold with Christ as the One Shepherd.

Unfortunately, the Mormons have twisted Scripture around and sought to apply to them the words spoken by Jesus thousands of years before their founding. The Mormons emphasize that Jesus was calling them to be of a different sheepfold. But this is also wrong. The emphasis of Jesus in the passage is not that there are different groups of followers of His; rather, the Lord was making it clear that He would bring all peoples together into one sheepfold. It is only in that one sheepfold (the Catholic Church) that we can all come together and truly follow the Lord.

A sixth grave error of Mormonism is that they believe The Book of Mormon is the ‘word of God’ just as the Sacred Scriptures are the inspired word of God. A number of the errors described above find support in this heretical book. When conversing with Mormons, it may help to challenge them on this idea and ask what evidence and reasons they have to support the belief that this book is from God. Conversely, Catholics should be prepared to explain the reasonableness of their belief that the Old and New Testaments are God’s inspired and inerrant divine revelation.

Spend some time familiarizing yourself with these errors. Arm yourself with the truth should you encounter a Mormon. And do not be dismayed if they have been so warped by their theology that they can not see the Truth of the Catholic Faith. Do what you can to help them, but above all, pray for the Mormons and for their conversion to the only true God – the Blessed Trinity.