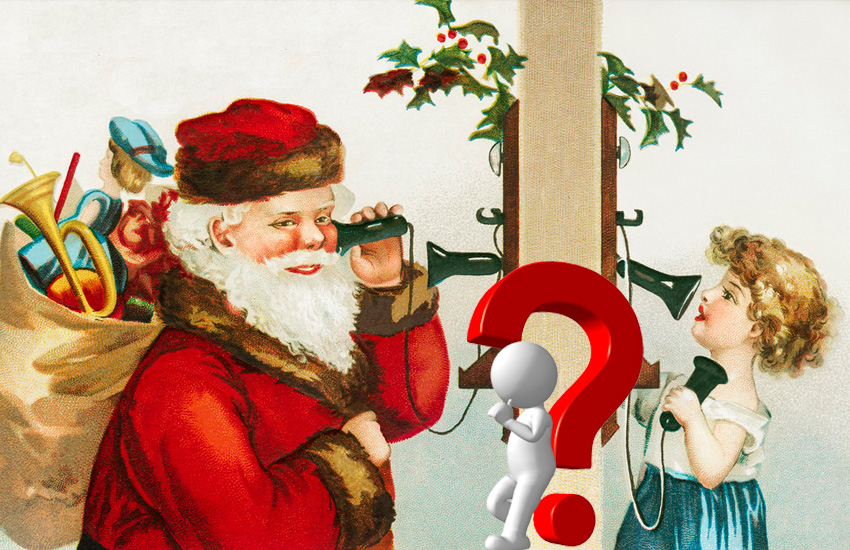 Editor’s note: The views and opinions expressed in this article are those of the author and do not necessarily reflect the official policy or position of fatima.org. We are fully aware that “Should children be told that Santa Claus is real?” is an issue where emotions can run strong for Catholics on either side of the matter. We hope our readers can use the forum below this article to charitably and intelligently express their views. Christian prudence governs this question, which is not a dogmatic matter.

Should children be told that Santa Claus is real? The question inevitably raises its head at this time of year and the standard opinions are put forth: some hold the view that the myth of an all-knowing and present-toting St. Nicholas is harmless and charming and salutary in its effect, encouraging better behavior, If only for venal motives. Others are staunchly opposed to the deliberate transmission of misinformation about a Lord of the elves dwelling in a toy workshop at the North Pole and keeping track of youthful transgressions with a calculus for reward or punishment.

Often, it seems that those in favor of Santa Claus tend to be more religious than those opposed. Such has been the case in my family, with the “progressive” thinkers lined up against the traditional believers. This makes sense, as the Santa Claus myth represents a pint-sized and pre-rational catechetic. Children who are raised to believe in Santa Claus may have an easier time understanding and accepting the reality of an omniscient, just and loving God.

I was a Santa Claus devotee during my tender years and I can recall no great trauma resulting from my eventual discovery that no such personage existed. I even have a rather vivid recollection of the moment the truth dawned on me. I was sitting in my room at a small desk my parents had provided for me when I started grade school. I had received for my seventh birthday a globe of the world and I was spinning it slowly and pondering the immensity of the Earth and all the exotic places it contained when the thought struck me: Santa Claus is impossible. No one could go to all of these continents and all of these nations in one night.

I went down to the kitchen where my mother was cooking dinner. I sidled up to her and said, “Santa Claus isn’t real, is he?” She smiled and her look was enough to tell me I was right. There was a touch of sadness in her expression. I had the feeling that I had done something both good yet regrettable. I returned to my room and my globe and to the sense that although Santa Claus had gone, he had left me the world to explore. I felt a certain exhilaration.

Those who believe that telling children mythical stories will lead to cynicism and mistrust when the “truth” is discovered are entertaining a baseless notion. Youth is fed on fairy tales and legends that are not so much debunked in later life but rather transmuted into more mature ideals. The truth does not lie in the details of the narrative, but in the soul qualities that are presented. These are understood in a deeper way that endures and may assume new forms, new expressions.

Who can deny that we reap what we sow? There may be no bearded man making a list and checking it twice but there is an immutable law that what we say and do returns to us in some form, both here and hereafter. With each act we either place another lump of coal in our stocking or another candy cane, so to speak. This may seem too simple – even simple-minded – but it is the way things are. How much better life would be for us and for others if we remembered this and acted accordingly.

And although I reasoned that the world was too big for Santa Claus to track and traverse, I never doubted that it was beyond God. And the older I grow, the more I am amazed at the immensity of Divine love. And, unlike Santa Claus, the gifts that God gives us are not restricted to what we have deserved. What did we do to deserve life? What did we do to deserve love? We are born out of the life and love of God and all we have is a gift given us from the beginning.

That God should want to share His life with us takes us beyond the bounds of reason. Why should it be so? We can only discover this step by step as we move closer to knowing Our Lord. And how do we know Him? By keeping His commandment: “Love one another, as I have loved you.”

Every day is an opportunity to know Our Lord better, to grow into His life and love and become one with Him. We cannot know God unless we love one another. With every kind word, with every generous act, with every patient endurance, whenever we place another’s good before our own desire, we come to know Christ better. This is the only way to know Him.

Of the billions of souls in the world, we know only a few personally. God knows each one. He loves each one. He wants each one to be saved. And He wants us to be instruments of salvation. God’s capacity for love is infinite. Our capacity for love is limited. But human love is only God’s love expressed through us. We have a capacity for growth that we can hardly imagine. Love has this amazing quality: the more we give it away, the more of it we have. In fact, when we give it all away, keeping nothing for our self, we will receive love in all the fullness we can embrace.

As Christmas nears, we see even unbelievers, even some of the worst among us, behaving in a kinder way. There is grace in the air that becomes almost palpable as the celebration of the birth of Jesus the Savior approaches. And this miraculous birth is the real point of all fairy tales and legends, the truth in which they culminate: Love and Mercy and gifts beyond all deserving and imagining come to us from above. So, let the children dream of the good things coming from the North Pole, as from a Heaven they cannot yet know. And let us marvel at this wonderful life we have been given so that we might become companions of the Divine.