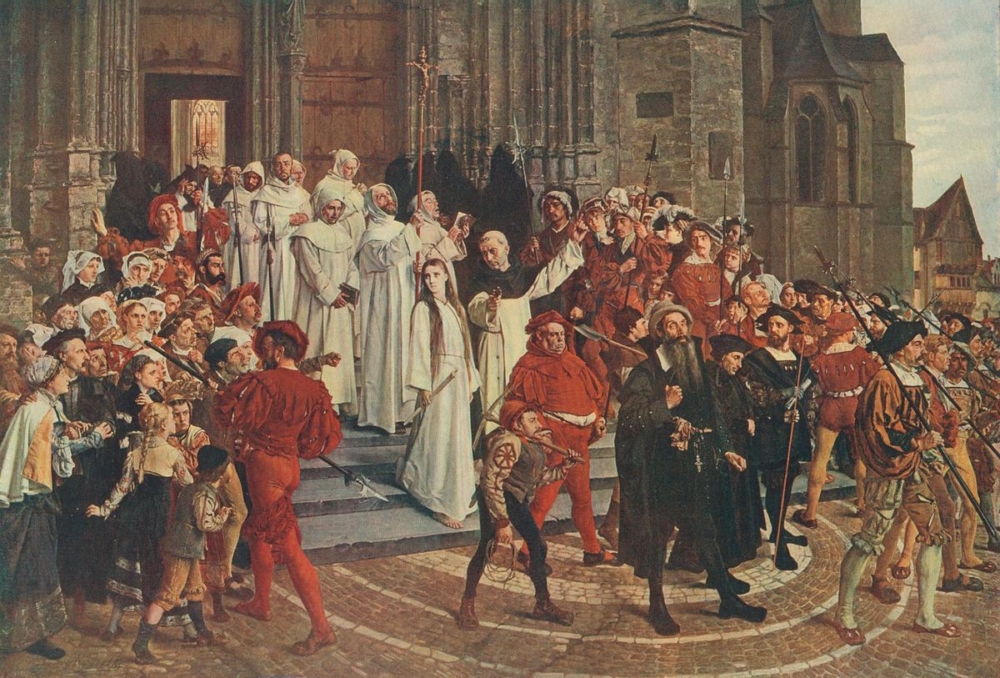 Keeping the Faith In Time of Persecution

Editor’s Note: “Merry [Mary’s] Ol’ England” used to be Christendom’s most Catholic nation. Tragically, under Henry VIII and his successors, the Mass was attacked and suppressed by civil and ecclesial authorities. Yet the Faith was not lost. Herein we note an echo of Our Lady of Fatima’s words “…the dogma of the faith will always be preserved, etc.” Catholics today are acutely aware that we find ourselves in a similar situation, especially from the attack on the Mass by Traditionis Custodes and the Great Reset’s COVIDian-jab agenda. May we learn valuable lessons from our history and be inspired by the fidelity of our ancestors.

A Perspective on Catholic Life in England During the 16th and 17th Centuries: Part 1

Those English men and women who remained true to the Roman Catholic Faith are estimated to have represented about ¼ of the population of the U.K. According to 1650 statistics, there were:

Incredibly, ¼ of this total represents 2.5 million people that were secretly practicing their Roman Catholic Faith. Also, there was a large number of people sympathetic to Catholics in many rural counties, especially Lancashire and York in the gentry and noble classes.[1]

For those who refused to attend the new mandatory Anglican Protestant Sunday services, which always contained sermons vilifying the “old religion,” they were forced to pay a fine. These individuals often registered as, and were labeled, Recusants.

Under a law passed in 1585 it became treason for a priest to celebrate Holy Mass, and anyone who harbored a priest committed a felony. Imprisonment and even death were the stark realities of life for Catholics who stayed true to their ancestors’ faith of 1,500 years.

Yet, in the midst of this turmoil, God provided for souls in a secret and unique fashion. Since most of the clergy and religious had been murdered by the king’s men, there were few Catholic priests remaining to offer Holy Mass. God’s inspiration through the Holy Spirit was manifested when many specific souls participated in a secret “enlightenment” which inspired them with a burning desire to become priests. This is most unusual, in light of the death sentence on their heads in England and other northern European countries.

Few Catholics today have any knowledge about this topic. The field of Sociology has only, since the 1970’s, looked for statistical facts to form analysis of social trends in society. This can be seen in the disinterest to research the number of people who remained Catholic during this time period. The statistic of 2.5 million people proves that the Catholic lay people never lost their faith, as has been erroneously taught since the 19th-20th centuries. And that many risked their lives and fortunes to assist at Holy Mass on their estates.

Now what was going on behind the scene, as mentioned earlier, was a groundswell of men being called to the priesthood. And more remarkable is where they wanted to go after attending seminary and where they asked to be assigned!

As far back as 1561, Cardinal William Allen [1532-1594] of Lancashire, England, and formerly principal of St. Mary’s Hall at Oxford University, refused to take the “Oath of Supremacy” ordered by Queen Elizabeth I. Allen fled to Louvain, France and was ordained to the priesthood in 1564. By 1567 he had established a seminary at Douai, France for the training of Catholic priests for England.

Within 10 years, 77 young Englishmen had been ordained at Douai for a hidden and dangerous mission in England. In fact, there were so many men that desired to become priests for England that English seminary colleges were established in Rome, Italy (1576); northwestern Spain at Valladolid (1589) [which is still in operation today]; and on the southwestern coast at Lisbon, Portugal and Saint Omer at Artois, France (both in 1593).[2] Incredible as it seems, this latter seminary was later relocated to England in 1794 at Stonyhurst College, Stonyhurst County, Lancashire and is still in operation today.

Once the newly-ordained priests returned to England they faced danger at every turn. Below is a drawing of a typical “priest’s hide-a-way” found at the Moseley Hall estate, Staffordshire County. 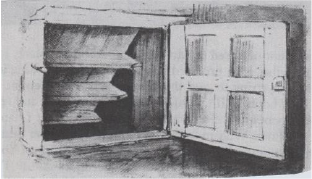 Drawings of a priest’s hideaway

and the Moseley Hall Estate

Moseley Hall was the residence of Lord Wilmot and his ancestors since the 1300’s. As far back as the year 1585 there had been Catholic Masses held for the family. There were many hiding places for the altar pieces and vestments, as well as rooms for the priest to hide until he could leave under cover of night.

Priests were forced to become everyday people, often widowed, running an estate, or having a formal profession as barrister, or accountant, etc. in order to remain completely hidden from the authorities.

One of the stories recorded from 1661 centered around Lord Wilmot, his family and relatives. Some 50 people were assisting at Mass in their secret chapel with their Jesuit priest, William Clitherow.[3] Suddenly, a parliamentary search party arrived on the scene, demanding admittance to Moseley Hall. One of the maids came running down to the chapel shouting, “Soldiers, soldiers are coming!” It was recounted that the evil and violence seen in the eyes of the soldiers was beyond explanation.

They apparently knew of the secret door, due to some informant, since the soldiers opened the secret door and proceeded down the stairwell. All were rounded up and taken to the Tower of London. After months in prison it was anticipated that Lord Wilmot, his family and Father Clitherow would be fully pardoned, due to the coronation of King Charles II, who was secretly a Catholic.

Here is another example of a priest and his dedication to holiness and service to God, in the face of untold danger. 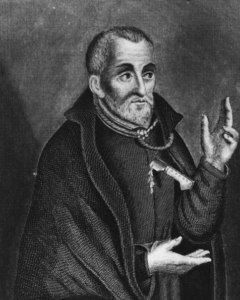 Dedicated young priests, like St. Edmund Campion, were sent into England to offer the Holy Mass in secret as well as to provide the sacraments of Confession, Matrimony, and Extreme Unction at death.

Many Royalist noble families brought the priests to their estates and gave them land and a professional cover, while secretly the priests provided the Holy Mass to those on the estates who were trusted. Often times the priests were trained as weavers, blacksmiths, and those who worked on the estates as managers. They did not go out in public, due to threat of imprisonment and death. If arrested, their sponsoring noble families could lose all their property, face imprisonment and be put to death as well. This was certainly shown in Lord Wilmot’s case.

Edmund Campion was born into a Catholic family and was the son of a bookseller in Paternoster Row, near St. Paul’s Cathedral. His early education was at Christ’s Hospital School. He went on to graduate from St. John’s College at Oxford University. Then he went on to receive a master’s degree at Oxford University in 1564. In 1569 he traveled to Ireland for private study and research. He left Ireland in secret to enter the seminary at Douai, France, receiving a Bachelor of Divinity in 1573. Edmund also was ordained a sub-deacon at that time. Later he joined the Jesuits and served as a professor at the Jesuit College in Brunn, Austria.

He was the first Jesuit priest to enter England, arriving as a jewel merchant to London in 1580. Edmund did not live a life in secret but openly preached the Catholic faith. This led him to lead a hunted life. He wrote pamphlets in Latin and distributed them at Oxford University. Later he was captured by a spy named George Eliot and taken to London. Edmund suffered imprisonment, torture, and ridicule. After a trial he was accused of high treason to dethrone Queen, Elizabeth I. Father Edmund Campion was hanged in 1581 and is considered one of the Forty Martyrs of England and Wales. He was beatified by Pope Leo XIII in 1886 and canonized in 1970 by Pope Paul VI.

God is working in every situation that we encounter, and reading about the lives of the Saints helps each soul to see how God works in the world. Once time has passed and the facts of a situation can be studied, usually a clear pattern can be discerned. In this case, the facts revealed that the Catholic faith was still strong in England and was never wiped out as previous generations surmised. This inaccurate assumption needs more attention. This account shows how it was the lay Catholics who the Holy Spirit touched with a burning desire to hear Holy Mass, to leave their homes and travel to another country to become priests. In every country the Holy Spirit touched souls differently.

It has even been revealed by the Mother of God when She appeared in 1846 at La Sallette, France, stating to the two children, that:

“One day England will return to the Roman Catholic Faith.”

Part 2 of this article will look at the Protestant Reformation and its effect on the enlightenment in other countries.

[2] At that time Artois was part of Flanders, within the Spanish Netherlands.

[3] William was the great nephew of Margaret Middleton Clitherow of York, who was martyred for her Catholic faith and Recusant status in 1586. 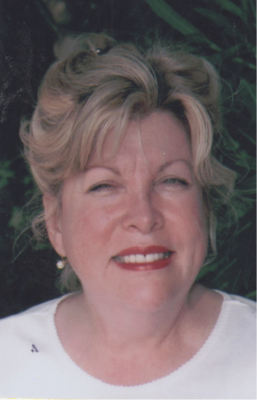 ABOUT THE AUTHOR Teresa Farris-Dacar is a Traditional Catholic from birth and a Benedictine Oblate, first at Christ The King Monastery in 1997 and then with The Monks of Nursia since 2015. She lives near Cullman, Alabama. For many years she worked as a college administrator and taught at the college level for different history classes, psychology and sociology. She has been writing and transcribing books since 2000. She can be reached by email at ForGodAndKing@att.net