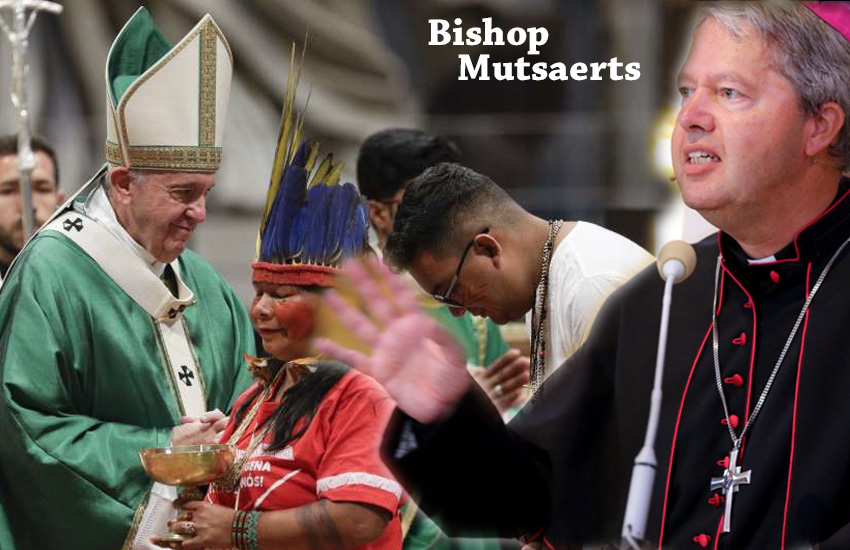 A Lonely Dutch Bishop Speaks Out

As I write this column, the commentators are bickering over whether “Pope Emeritus” Benedict XVI agreed to be the co-author of Cardinal Sarah’s book, a very small portion of which (by Benedict) defends the Apostolic tradition of priestly celibacy, and whether he has been bullied into removing his name from the publication by Pope Francis and his minions, including the Prefect of the Papal Household and the Pope’s Personal Secretary, Archbishop Georg Gänswein.  Quite simply, who cares?  That Francis will authorize the ordaining of ill-formed, married “elders” in the countries of the pan-Amazon region, heralding the death of priestly celibacy if he has his way, is already a done deal.  We will be able to confirm that in a matter of days when his “apostolic exhortation” following the phony baloney Amazonian synod, said to be complete, is released.

What interests me is a remarkable statement on the Amazon Synod’s Final Document, which was only the launching pad for the “apostolic exhortation” and was probably written even before the fake synod began.  I mean the statement by the Dutch auxiliary bishop Robert Mutsaerts as reported by LifeSiteNews.

Mutsaerts declares: “Let’s hope that Pope Francis will destroy the final document, but hopes are truly slim. Lord, have mercy.”  Not only slim, but nonexistent.  But the reasons Mutsaerts gives for his sentiment are an indictment of this entire pontificate.

Speaking to the Italian daily Il Giornale, Mutsaerts, LifeSite summarizes, said that Francis presided over an “already written synod” whose “real objective was to introduce the ordination of married men, female deacons, and a new ‘Amazonian’ rite into the Catholic Church.”  Mutsaerts added that “It seems … that the synod brought Amazonian idolatry to Rome,” and “opened a ‘Pandora’s box’ of innovations for the whole Church, starting with Germany, whose official ‘Synodal Path’ will open in less than two weeks.”

In Germany, where Martin Luther is having his revenge, LifeSite reminds us that “A majority of German bishops are openly lobbying for the revolutionizing of a woman’s role in the Church, the scrapping of the rule of celibacy for priests in the Latin Church, and the liberalization of sexual morality.”

LifeSite’s translation of the interview includes Mutsaerts’ conclusion, which I quote in full:

“The key words in the final document of the synod were not ‘Mother Earth’ and ‘the ecosystem,’ but ‘viri probati,’ ‘deaconesses,’ and ‘the Amazonian rite.’ It was Cardinal Hummes who pushed the outcome in that direction. Of course, now the results will not be limited to the Amazon region. Pandora’s box is open, and there will be implications for the whole Church. The local bishops, starting with Germany, will ask the same thing. It was a synod that deceived the faithful. That is the sad conclusion: it was a mockery of our glorious faith, a break with tradition.”

But who presided over this fraud, this break with Tradition, stage-managing it from the opening act to the closing curtain?  This Pope did. The italicized sentence above aptly describes the entire course of his astonishing pontificate.

God will undo it all in His own good time.  But only He knows how.  We can know only that it will involve the maternal intercession of His Holy Mother and the Message of Fatima.