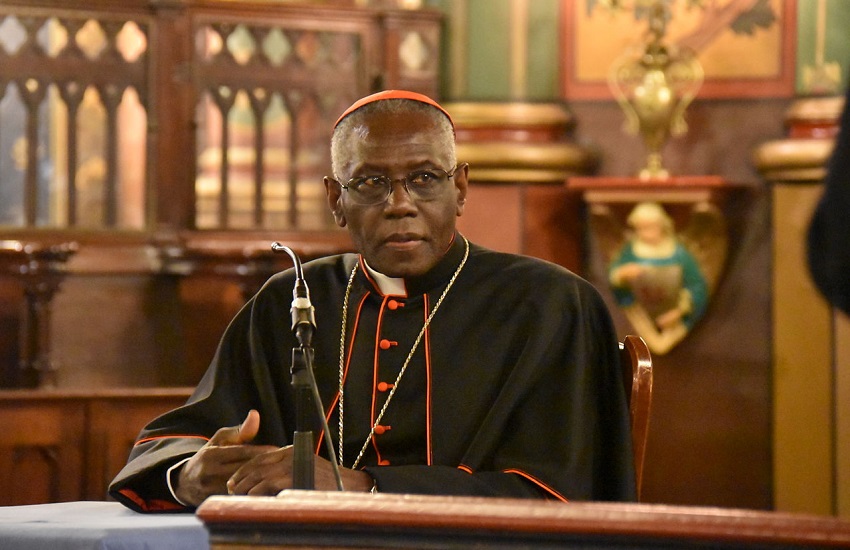 As Pope Francis relentlessly implements his expressed ambition of “transforming everything” in the Church — he has already introduced Holy Communion for certain public adulterers, which John Paul II denounced as “intrinsically impossible,” and has also purported to reverse 2,000 years of Church teaching on the moral liceity of the death penalty — we find that the supposed staunch conservative Cardinal Sarah is determined to maintain the pretense that Francis has nothing to do with the spread of the errors he himself deplores.

As LifeSiteNews reports, in a recent interview with Corriere della Sera (October 7), Sarah “proceeded to enumerate a number of concerns and denunciations of errors that are often openly linked to Pope Francis’ governance and confusing statements but that he prefers to attribute to priests, bishops, and cardinals…”

In the same interview, Sarah issues the glaring non sequitur that “The truth is that the Church is represented on earth by the Vicar of Christ, that is, the Pope. And whoever is against the Pope is ipso facto outside the Church.”

Of course, the conclusion that to oppose the Pope is to be outside the Church does not follow from the premise that the Pope is Vicar of Christ.  The entire history of the Church is to the contrary, beginning with Saint Paul’s opposition to Peter at Antioch (“I withstood him to the face” – Gal 2:11) and continuing through various instances of opposition down the centuries to wayward Popes who acted or taught in ways that were contrary to tradition. For example, the furious opposition to the insistence by John XXII that the blessed departed will not enter into beatitude until the end of time, which opposition led to his retraction of the error literally on his deathbed.

Now, Cardinal Sarah cannot be unaware that his “concerns and denunciations of errors” arise from Pope Francis’ governance of the Church and that it is the results of that governance he now decries.  So it is sad to see this eminent prelate adopt what can only be seen as a rhetorical pose: “The truth is that those who oppose me to the Holy Father cannot present a single word of mine, a single phrase of mine, or a single attitude of mine to support their absurd, and I would say diabolical statements.”

Opposition to Francis?  Moi? One has the right to expect absolute candor from a Prince of the Church.  But that is hardly what we are getting here.

The Cardinal descends to patent absurdity when he further declares as follows:

“[E]very Pope is ‘right’ [giusto] for his time, Providence sees us very well, you know?… [W]e are called to rediscover, both with the unparalleled analysis of Benedict’s thought and with the great and luminous industriousness of Francis. While there is an obvious difference of sensibilities, there is a great harmony and a great continuity between them [!], as everyone has been able to see in these years. We must always interpret the words of Pope Francis with the hermeneutics of continuity.”

Here we go again with the never-explained “hermeneutic of continuity.”  Benedict and John Paul II alike affirmed the Church’s bimillennial refusal to permit the divorced and “remarried” to receive Holy Communion, but Francis has now permitted it.  For 2,000 years the Church taught, based directly on divine revelation (cf. Gen 9:6), that capital punishment is morally justified in defense of the sanctity of life, but Francis now declares that it is “inadmissible” as “an attack on human dignity” and has ordered that the Catechism of John Paul II be “changed” to forbid what the Church has always approved.  Francis evidently disagrees with God on this point.

The Cardinal can complain all he likes about the state of the Church today.  But until he recognizes publicly what he surely knows privately — that the current ecclesial crisis ultimately emanates from papal acts and omissions — his protests, his books, his interviews all amount to nothing but elaborate dissimulation that only conceals the truth about our situation.  And the truth is that precisely because the current crisis is a crisis of the papacy, it is the worst crisis the Church has ever endured.  It is, as the Third Secret warns, an apostasy that “begins at the top.”

Cardinal Sarah owes it to the Church to say what he knows.