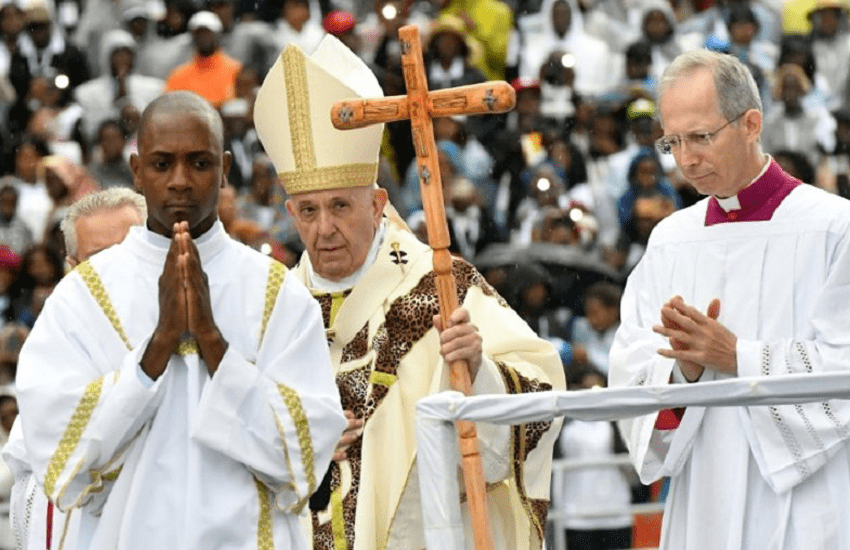 “Dear brothers and sisters, whether we like it or not, we are called to face reality as it is. Times change and we need to realize that often we do not know how to find our place in new scenarios: we keep dreaming about the ‘leeks of Egypt’ (Num 11:5), forgetting that the promised land is before us, not behind us, and in our lament for times past, we are turning to stone. Instead of proclaiming Good News, we announce a dreary message that attracts no one and sets no one’s heart afire.”

Here we see a classic element of the Modernist system: its historicism.  In his masterwork Iota Unum, a penetrating multidisciplinary study of baneful changes in the Church (meaning her human element) since Vatican II, Romano Amerio explains historicism thus:

“Historicism, being the consideration of existence detached from any fixed essence, finds reality only in movement, and gives rise to a universal mobilism. Indeed, once one does deny the transtemporal element in every temporal thing, which consists precisely in its fixed nature, being dissolves into becoming, to the exclusion of any abiding reality, even though in fact the latter is necessary in order to conceive of the very notion of becoming.”

The historicist mentality exhibited in the quotation from Francis’ address is veiled in ambiguity: How have “times changed” in a way that would require some sort of corresponding change in Catholic belief or practice, and what are the “new scenarios” as distinguished from old ones?  What exactly does Francis mean by the “times past” whose loss we must not lament, and what exactly is this “promised land” which, according to this way of thinking, is always “before us” on the horizon, endlessly vaunted but never reached?  In what sense can those who do not share Francis’ disdain for “past times” be said to be “turning to stone”?  What does this insult even mean?

The rhetoric is empty, but its tenor is clear:  We must move beyond the traditional beliefs and practices, including the Latin liturgy, that comprise the faith of our fathers, handed down from the time of the Apostles, and modify our religion to accommodate something or other that is new.  We cannot forget that it was this Pope who, in his sprawling personal manifesto Evangelii Gaudium, uttered that infamous denunciation of “the self-absorbed promethean neopelagianism of those who ultimately trust only in their own powers and feel superior to others because they observe certain rules or remain intransigently faithful to a particular Catholic style from the past. A supposed soundness of doctrine or discipline leads instead to a narcissistic and authoritarian elitism…”

What matters for this historicist vision of the Faith is not soundness of doctrine or discipline or the past “style” of Catholicism — as if the Faith were a matter of changing styles — but rather the promised land that exists only in Francis’ imagination.  Or more precisely, his stated “dream,” revealed in the same manifesto, of “a ‘missionary option’, that is, a missionary impulse capable of transforming everything, so that the Church’s customs, ways of doing things, times and schedules, language and structures can be suitably channeled for the evangelization of today’s world rather than for her self-preservation.”

Transforming everything. But into what?  It doesn’t matter.  The transformation is the thing, a “universal mobilism” that is always moving “forward” toward a destination that is never defined except to the extent that it requires a rejection of “times past”.  As for the future destination, well, you never know where you’re going ‘till you get there.  Except that we never seem to get there.  Instead, all we hear are endless exhortations to continue marching toward an ever-receding mirage — the realization of “the true Council” — whose details never come into focus.

Completely lost in this confusion is what Amerio calls the “transtemporal element in every temporal thing,” including the temporal elements of an ecclesial commonwealth which are the visible signs of supernatural realities, above all a timeless liturgy that Francis clearly despises as a thing from “times past,” appealing only to “promethean neopelagians.”

But now we have a new liturgy, quite appealing to Francis and those who think like him, which has largely failed to convey those same supernatural realities but rather has engendered only collective boredom or outright abandonment of the pews.  Which is why the future Pope Benedict XVI, one of those Popes who exhibited considerable respect for “past times,” so famously lamented:  “But if in the liturgy the communion of faith no longer appears, nor the universal unity of the Church and of her history, nor the mystery of the living Christ, where is it that the Church still appears in her spiritual substance?”

Where indeed?  It certainly does not appear on the pages of Evangelli Gaudium, where we encounter only the same mirage toward which the human element of the Church has been goaded mercilessly for more than half a century. May the Good Lord soon bring an end to this wandering in the post-conciliar desert. May He, by raising up a courageous and holy Roman Pontiff, lead the Church toward that true promised land — the one heralded by the Consecration of Russia and the triumph of Mary’s Immaculate Heart.