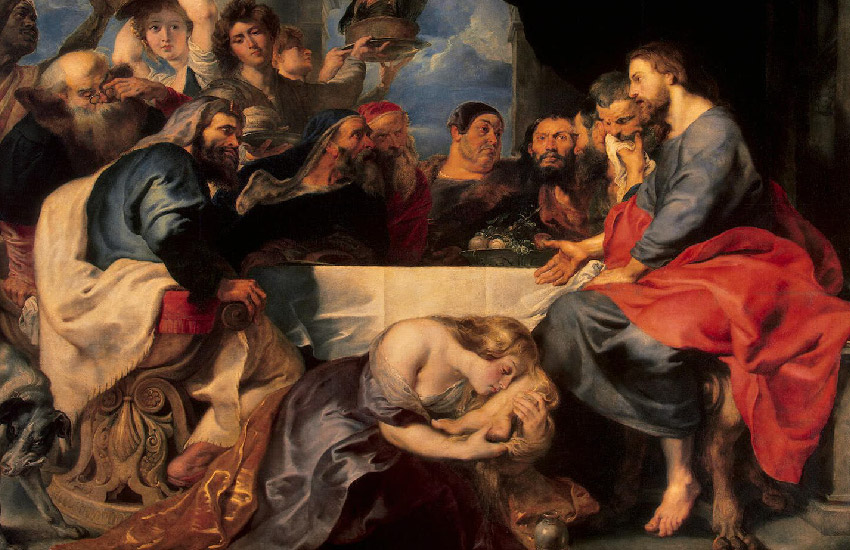 Pope Francis has bent and twisted the Gospel so often to suit the rhetorical needs of the moment that a group of diocesan priests (who must remain anonymous) has compiled an entire compendium of the words of Francis versus the Church’s traditional understanding, which is found here. To recall just two of the more memorable examples:

According to Francis, when standing at the foot of Cross, Mary “surely… wanted to say to the Angel [of the Annunciation]: ‘Liar! I was deceived.’ She, too, had no answers.” In other words, Mary lacked faith and was not sinless. Why else would She accuse God and His messenger of having ‘deceived her.’

And, according to Francis, when Our Lord was found by Mary and Joseph in the Temple, amazing the elders with His wisdom, “For this little ‘escapade’, Jesus probably had to beg forgiveness of his parents. The Gospel doesn’t say this, but I believe that we can presume it.” In other words, Christ sinned. Why else would He need to “beg forgiveness” for His “escapade”? That in fact He chided His parents for not recognizing that He had to be about His Father’s business seems to have escaped Francis’s exegetical method.

The latest example of Gospel-twisting, found here, is that, according to Francis, when the woman poured precious ointment on Our Lord’s feet (in a prefigurement of His burial) as recounted in Chapter 14 of Mark, “It was also for the sake of the poor, the lonely, the marginalized and the victims of discrimination, that the Son of God accepted the woman’s gesture.”

But this is nonsense. Our Lord — in immortal words known to the whole world, believers and unbelievers alike — declared “The poor you will always have with you” as a rebuke to the Pharisees in attendance, as well as the traitor Judas, who were murmuring, in the mode of modern demagogues, that the ointment should have been sold and the proceeds given to the poor. Moreover, the woman who broke the alabaster box and poured its precious contents onto the feet of Our Lord was “A woman in that town who lived a sinful life,” but who “learned that Jesus was eating at the Pharisee’s house, so she came there with an alabaster jar of perfume.” (Lk. 7:37)

As Our Lord Himself recognized, the gesture of that sinful woman, who had just poured the equivalent of a year’s worth of wages (300 denarii) over His feet, had nothing whatsoever to do with the poor, the marginalized or — please! — “the victims of discrimination.” The woman was making atonement for her sins and giving glory precisely to the Anointed One Who would sacrifice Himself to make atonement possible for her and for all humanity.

Who was this woman? The tradition in the Latin Church, which comprises the vast majority of the faithful, has held from time immemorial that she was Mary Magdalene, who in turn was Mary of Bethany, all three being one and the same person, who appears in the Gospels as a follower of Our Lord — the first witness of the Resurrection whom Our Lord instructed to the tell the others that He had risen. As no less than Pope Saint Gregory the Great declared in 591: “She whom Luke calls the sinful woman, whom John calls Mary, we believe to be the Mary from whom seven devils were ejected according to Mark.” And that sinful woman was a repentant prostitute, as the tradition acknowledged by Pope Saint Gregory had always acknowledged.

That Mary Magdalene and Mary of Bethany are one and the same is all but certain, while the identity of this Mary with the sinful woman we encounter in Luke is at least probable, as we read here. Pope Gregory the Great certainly thought so! Predictably enough, however, during the so-called Reformation, Protestants adamantly rejected the identity of the three, especially as it concerns the sinful woman, because, as the Catholic Encyclopedia observes, “It almost seems as if this reluctance to identify the ‘sinner’ with the sister of Martha was due to a failure to grasp the full significance of the forgiveness of sin.”

Also predictable, given the outcome of Vatican II, was Paul VI’s decision, noted with approval by that prominent outlet of post-conciliar correctness, Aleteia, to “remove[] from the liturgical calendar the appellative ‘penitent,’ which had traditionally been applied to Mary Magdalene, and since then, the readings of the liturgy of the day ceased to be those referring to the penitent sinner and began to be the Gospel passages that properly refer to her.”

Why this change after 1,400 years? As Aleteia observes, the tradition of Mary Magdalen, the repentant prostitute who became a saint, “was opposed decades ago by Catholic theologians and by recent popes.” Well, if a tradition of fourteen centuries’ standing, affirmed by Pope Gregory the Great, the builder of Christendom, was opposed “decades ago” by some theologians and “recent Popes,” then of course it must be tossed overboard, along with everything else that was jettisoned for the sake of “ecumenism” and “the great renewal,” whose results have been the de facto decommissioning of the Catholic Church. For who would make bold to question the new discoveries of that era of enlightenment known as the Seventies?

Today the Church is led by a Pope whose thinking is stranded in the Seventies, and who now declares that Our Lord was defending the “victims of discrimination” when a sinful woman, in a supreme act of repentance and humility, anointed His feet as He rebuked those who, not recognizing His divinity, were murmuring about the poor at that key moment in salvation history. One wonders if Francis, had he been present, would have been among the murmurers.