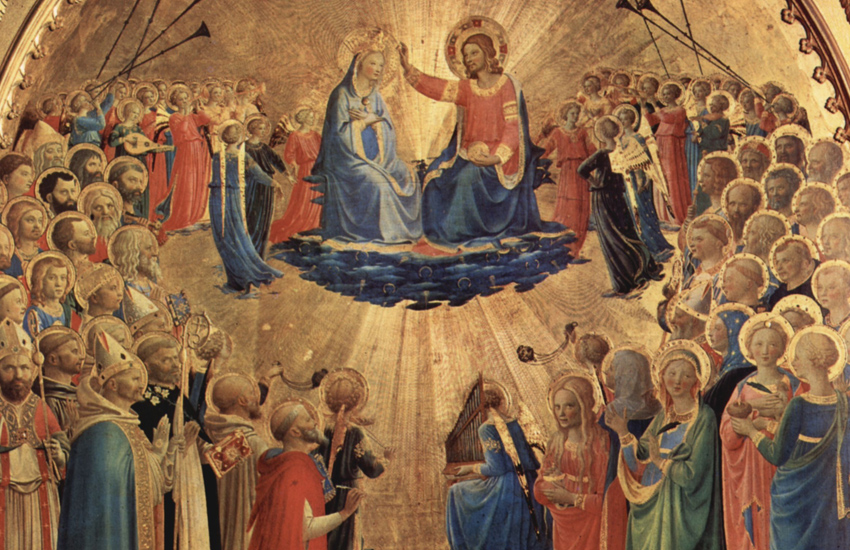 Why Pray to Saints?

A canonized saint is a person who the Church declares to already possess the Beatific Vision (i.e. someone whose soul is in Heaven) and whose life is worthy of imitation on account of the virtues they possessed. Catholics are frequently criticized for “praying to the dead” by some non-Catholics who seem to believe that by praying to the saints we are taking something away from God. We as Catholics know that the relationship we have with the saints is entirely different than the relationship we have with God. Protestants often accuse Catholics of necromancy and idolatry because of our devotion to the saints. These claims are false.

“Therefore, confess your sins to one another and pray for one another, that you may be healed. The fervent prayer of a righteous person is very powerful.” – James 5:16.

We never pray to a saint as an end, but rather as a means, asking them to pray along with us. They are intercessors for us as they are in the presence of God Himself in Heaven. These men and women in Heaven are very close to God and it makes sense that asking them to pray for us can only yield good. It is common practice to ask fellow human beings on earth to pray to God for us and our intentions. No one rightfully faults this practice. And since death is not the annihilation of a human soul and those who are now in Heaven see God, why should we not ask them for their intercession?

A basic study of Church history reveals that honoring the saints and praying to them is of apostolic origin. The term “saint” is from the Latin word sanctus, meaning “hallowed” or “consecrated.” The first person honored individually as a saint was Stephen, the first martyr, whose death is recorded in the Book of the Acts of the Apostles, Chapters 6 and 7. For nearly four centuries, praying to St. Stephen was incredibly popular. Beginning at the end of the second century, there were special celebrations on anniversaries of the martyrs’ deaths. These martyrs were witnesses of Christ. By the fourth century, sainthood was not just considered for martyrs. It was also for confessors and virgins.

How Can the Saints Hear Our Prayers?

“And when he had opened the book, the four living creatures, and the four and twenty ancients fell down before the Lamb, having every one of them harps, and golden vials full of odours, which are the prayers of saints” (Apocalypse 5:8)

The Book of the Apocalypse written by St. John the Apostle specifically mentions how the prayers of the saints are presented before God in Heaven. The saints in Heaven are very much aware of what is happening on earth because God has in His order of the world permitted them to know of prayers addressed to them. In Matthew 17:3-5, the prophets Moses and Elijah were very much aware of what was taking place on the earth. The saints themselves are witnesses of what occurs on earth as the Book of Hebrews specifically states: “Therefore, since we are surrounded by so great a cloud of witnesses, let us rid ourselves of every burden and sin that clings to us and persevere in running the race that lies before us” (Hebrews 12:1). And Our Lord Himself in Luke 15:7-10 describes those in Heaven rejoicing over repentance on earth. How could they do so unless in the mystical order of the universe God has somehow permitted them to know and see what was happening on the earth?

Does Praying to the Saints Violate Christ’s Role as Mediator?

Through the hypostatic union, the Second Person of the Blessed Trinity took on human nature; thus, it is Jesus Christ alone Who can truly offer Sacrifice for mankind and stand as the sole mediator between human beings and God the Father.

However, this does not prevent other mediators between mankind and Our Lord. In the four verses immediately preceding 1 Timothy 2:5, St. Paul says that the faithful should intercede for each other: “First of all, then, I urge that supplications, prayers, intercessions, and thanksgivings be made for all men, for kings and all who are in high positions, that we may lead a quiet and peaceable life, godly and respectful in every way. This is good, and pleasing to God our Savior, who desires all men to be saved and to come to the knowledge of the truth” (1 Tim. 2:1-4). St. Paul himself asks for intercession to be made for one another.[1] If we can ask fellow Catholics on earth to pray for us to God, what would prevent us from asking fellow Catholics in Heaven to do so? The souls of the saints in Heaven are, after all, truly alive.[2]

Why Do Catholics Have Images or Statues of the Saints?

Catholic images include such things as statues, artistic renderings, and other works of art. Some may be concerned that this is a violation of the First Commandment,[3] but we know as Catholics that when we see a beautiful statue of the Blessed Mother or one of the saints we don’t actually worship the plaster, but we use it as a way to remind us of that individual. Just as we all display photos in our home to remind us of our loved ones, both living and dead, nobody would accuse us of worshipping or loving the photo rather than the person. Images are a way to draw us closer to God and holiness. We should take advantage of the vast array of Catholic images at our disposal and do our best to incorporate them into our homes as a vehicle for bringing ourselves and our families to the love of God.

In the Old Testament in the Book of Numbers verse 21:8, God commanded Moses to make the bronze serpent which we learn is a symbol of Jesus Christ (cf. John 3:14). It is only destroyed after it is worshiped (cf. 2 Kings 18:4), the making of it was not a sin. And there were images of the cherubim angels in the temple (cf. 1 Kings 6:23-31) and God blessed the temple (cf. 1 Kings 9:3). Not one line of Scripture ever condemned the creation of images or art of those in Heaven.

Besides considering the Scriptural basis for praying to the saints, we can also look at the manifestation of miracles which attest to the truths of Catholic doctrine. Obviously, God would not bless a false doctrine with an abundance of miracles, and if there were no God, miracles could not be. So, the miracles performed by Catholic saints, and attested to by numerous witnesses of exemplary character, furnish powerful proofs of the divinity of the Catholic religion. And there are so many, we hardly know where to begin. Various authors, such as Joan Carroll Cruz, have written extensively about this. Consider reading anything about Our Lady of Lourdes, St. Bernard of Clairvaux, St. Francis of Assisi, St. Vincent Ferrer, St. Joseph of Cupertino, St. John Bosco, or St. Padre Pio, just to name a few. Also try to read anything about the miracles at Fatima, especially John Haffert’s Meet the Witnesses.

There are no reported miracles ever worked by Martin Luther or any Protestant “reformer” or clergyman. There are no reported miracles performed and beyond the explanation of science by any religion (e.g. Protestants, Muslims, Jews, Hindus, Buddhists, et cetera) except for Catholic saints. Only the miracles attributed to Catholic saints – even in modern times – are without scientific proof.

[1] How lamentable that those who oppose Catholic dogma do such violence to the Scriptures as to read passages completely out of context, even in opposition to the immediate context of the words which surround the lines they are trained to cite.

[2] If we correctly understand “life” to be, in some way, a participation in God, Who is the Source of all that exists (I AM WHO AM), then the saints in Heaven are more “alive” than those on earth for they have a greater participation in God. We on earth still face the possibility of committing a mortal sin, of losing our friendship with God, and we even have the potential to suffer “eternal death” (i.e. hell). The saints in Heaven do not. They no longer have the potential to lose the divine life of God. On this account also, it is correct to say that, in a certain sense, they are more “alive” than those on earth.

[3] Again, the immediate context of Scripture is clear for those who are willing to read with Faith or even just with right reason. In the First Commandment (Cf. Ex 20:3-5), God forbids “strange gods” (v. 3) for there is only One True God. All “false gods” or idols ultimately stem from demonic inspiration. Scripture likewise attests that “the gods of the gentiles are devils” (Ps 95:5). God forbids the making of graven images (v. 4) which are used to adore and serve (v. 5) false gods. Images of the saints do not lead us to adore and serve demons, rather they lead man to love, adore and serve the One True God!