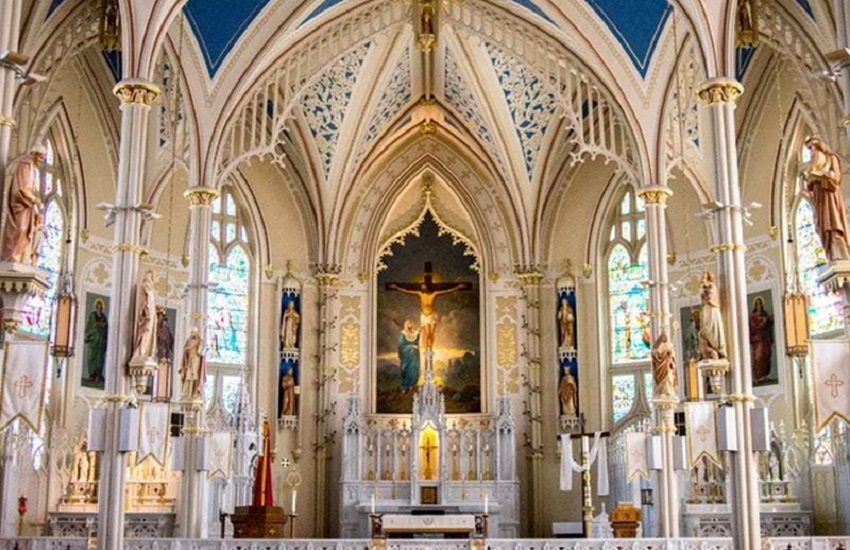 Many people have the misguided opinion that organized religion is not necessary. They believe in ‘communing with God’ by personal and independent means, only in the here and now. They reject the calling of God to live as one Body of faith, in communion together, which includes those who have come before us. People who think they can be “spiritual but not religious” are living a delusion.

The entire purpose of the Catholic Church is to be the means of salvation for the entire world. The Church was instituted by Jesus Christ Himself (cf. Matthew 16:18) and founded on St. Peter, the first Pope. Fr. John Laux in Catholic Apologetics Book IV explains:

“The work of Redemption consisted in the discharge of this threefold office (of Priest, Prophet, and King). On the eve of His departure from this world Christ delegated His powers to His Apostles: ‘All power is given to Me in heaven and on earth: going therefore, teach ye all nations, baptizing them in the name of the Father, and of the Son, and of the Holy Ghost, teaching them to observe all things whatsoever I have commanded you: and behold I am with you all days, even to the consummation of the world’ (Matthew 28:18-20).

“From this commission of Christ, it is evident that His followers form an organized society under the leadership and guidance of the Apostles and their successors, with the right to teach and to command on one side, and the duty to be taught and to obey on the other…

“Everything is visible about His great institution: Baptism, which is necessary for membership, the other Sacraments which He commanded His followers to receive, the rulers and lawgivers whom the faithful must obey, the tribunal before which the faithful are judged and to which they have a right to appeal.”

The First Commandment condemns all false religions. Can non-Catholics be saved?

The Church has always taught that there is no salvation outside of the Catholic Church (Extra Ecclesiam nulla salus). Thus, all peoples can only be saved by being a member of the Catholic Church. Naturally, they must also be in the state of grace at the moment of death. Some may be saved at the moment of death where to our eyes they may appear to have died as a non-Catholic but through an extraordinary grace granted by God they became Catholic in their last earthly moments. However, the Church also teaches that this is rare and no one should ever presume to rely upon receiving such an exceptional grace. In fact, without a revelation from God, we could never know who received such a grace – until the General Judgment, when God will plainly show to whom, why and how such mysterious graces were given. Nevertheless, it remains an infallible dogma to which we must assent under pain of sin, that no one who dies outside of the Church can be saved.[3]

Pope Innocent III: “There is but one universal Church of the faithful, outside which no one at all is saved.” (Fourth Lateran Council, 1215)

Pope Boniface VIII: “We declare, say, define, and pronounce that it is absolutely necessary for the salvation of every human creature to be subject to the Roman Pontiff.” (Unam Sanctam, 1302)

Pope Eugene IV: “The most Holy Roman Church firmly believes, professes and preaches that none of those existing outside the Catholic Church, not only pagans, but also Jews and heretics and schismatics, can have a share in life eternal; but that they will go into the eternal fire which was prepared for the devil and his angels, unless before death they are joined with Her; and that so important is the unity of this ecclesiastical body that only those remaining within this unity can profit by the sacraments of the Church unto salvation, and they alone can receive an eternal recompense for their fasts, their almsgivings, their other works of Christian piety and the duties of a Christian soldier. No one, let his almsgiving be as great as it may, no one, even if he pour out his blood for the Name of Christ, can be saved, unless he remain within the bosom and the unity of the Catholic Church.” (Cantate Domino, 1441)

Pope Pius IX: “It is to be held of faith that none can be saved outside the Apostolic Roman Church … but nevertheless it is equally certain that those who are ignorant of the true religion, if that ignorance is invincible, will not be held guilty in the matter in the eyes of the Lord” (Solemn Allocution Singulari Quadam, December 9, 1854). “We all know that those who are invincibly ignorant of our religion and who nevertheless lead an honest and upright life, can, under the influence of divine light and divine grace, attain to eternal life; for God who knows and sees the mind, the heart, the thoughts, and the dispositions of every man, cannot in His infinite bounty and clemency permit any one to suffer eternal punishment who is not guilty through his own fault.” (Quanto Conficiamur, 1863)[4]

Now those documents all clearly state that the Church is the one means of salvation. So those who reject the Catholic Church also reject Jesus Christ and thus reject salvation. No one can change these teachings – not the Pope’s own personal opinions, not interpretations of Vatican II documents, not your pastor’s sermons. Nothing can change what the Church has authoritatively and infallibly taught since its founding – the Catholic Religion alone is the One True Religion.

Statements by Church Doctors on salvation:

St. Augustine: “When we speak of within and without in relation to the Church, it is the position of the heart that we must consider, not that of the body” (Treatise on Baptism). “All who are within in heart are saved in the unity of the ark.”

St. Augustine: “No one can find salvation except in the Catholic Church. Outside the Church, you can find everything except salvation. You can have dignities, you can have Sacraments, you can sing ‘Alleluia,’ answer ‘Amen,’ have the Gospels, have faith in the name of the Father, the Son, and the Holy Ghost, and preach it, too. But never can you find salvation except in the Catholic Church.”

We do all that we do in terms of missionary work because souls depend on it. We do not want conversions simply to increase our numbers. We don’t do missionary work because someone else has most of the truth and we just want to help them to a more complete truth. We do it for the sole reason that Christ Himself commanded us to spread the Faith because the salvation of souls depends on it. St. Paul wrote that faith comes through hearing (cf. Romans 10:17) and “How then shall they call on him, in whom they have not believed? Or how shall they believe him, of whom they have not heard? And how shall they hear, without a preacher?” (Romans 10:14). After all, “there is no other name under heaven [except the name of Jesus Christ] given to men, whereby we must be saved” (Acts 4:12).

We must reject religious indifferentism[5] and seek to win as many souls as possible from the devil.

[1] Editor’s Note: If you find yourself talking to someone about this issue, it is very helpful to define terms. Otherwise you may be talking about different realities even though you are using the same words. Our body is the material part of our existence, which can be detected through the five senses, whereas the spirit is the immaterial part of our human existence, including the mind and will. The mind’s purpose is to know truth and the will’s purpose is to choose the good. Given these basic definitions, it makes sense to say a ‘spiritual person’ is one who strives to have his spirit flourish – that is, he strives after truth and goodness. Ultimately, God is the source of all truth and goodness. God is in fact pure spirit. Hence, when man seeks intimacy with God, striving for truth and goodness, he is being ‘spiritual.’ Religion, on the other hand, is the virtue by which man renders unto God what is His due. When man recognizes his complete dependence upon God, he renders unto God fitting worship, including adoration, thanksgiving, supplication and impetration. The man who does this well, according to God’s design, is said to be religious. With this understanding, it makes perfect sense that one who is spiritual (strives for intimacy with God) must necessarily be religious (renders to God what is His due). If one chooses not to be religious (refuses God His due), then he can never be spiritual, for he will always be far from God.

[2] Editor’s Note: Again, definitions are very helpful. St. Paul clearly teaches: “Without faith it is impossible to please God” (Hebrews 11:6). Yet many people don’t know what faith truly is. They mistakenly think it is an internal feeling, or a blind trust, or a kind of personal hope. The First Vatican Council clearly defines this term: Faith is “a supernatural virtue, by means of which, with the grace of God inspiring and assisting us, we believe to be true what He has revealed, not because we perceive its intrinsic truth by the natural light of reason, but because of the authority of God Himself, who makes the revelation and can neither deceive nor be deceived” (Dogmatic Constitution On the Catholic Faith, Chapter 3, 24 April 1870).

[3] Editor’s Note: The Athanasian Creed, which is one of the Church’s four major creeds, has been accepted by the Church with her infallible authority and professed publicly by the Fathers at the Council of Florence (1438). It reads in part: “Whoever wishes to be saved must before all else adhere to the Catholic faith. He must preserve this faith whole and untarnished; otherwise he shall most certainly perish forever… This is the Catholic faith, and anyone who does not believe it fully and firmly cannot be saved.” (In Latin: “Quicúmque vult salvus esse, ante ómnia opus est, ut téneat cathólicam fidem: Quam nisi quisque íntegram inviolatámque serváverit, absque dúbio in ætérnum períbit… Hæc est fides cathólica quam nisi quisque fidéliter firmitérque credíderit, salvus esse non póterit.”)

[4] Editor’s Note: Pius IX also led all the Fathers of the First Vatican Council in professing the true Catholic Faith, at the end of which he proclaimed: “…this true Catholic faith outside of which none can be saved, which I now freely profess and truly hold, is what I shall steadfastly maintain and confess, by the help of God, in all its completeness and purity until my dying breath, and I shall do my best to ensure that all others do the same…” (Session 2, 6 January 1870).