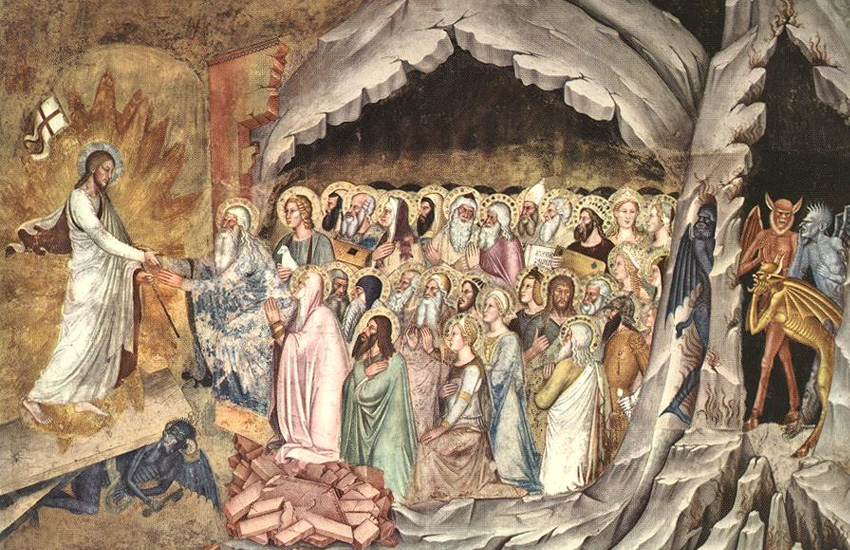 As I stated in my previous column, a canonized saint is a person who the Church declares to already be in possession of the Beatific Vision (i.e. one whose soul is in Heaven and ‘sees’ God). And while we honor the thousands of canonized saints who died in the past two millennia, we are prone to forget that those who predated our Divine Redeemer but who are now in Heaven are no less worthy of imitation. Heaven is not only for the “New Testament” saints but for all saints – everyone who died in the state of grace. And the company of saints includes the holy men and women of the Old Testament.

Venerable Anne Catherine Emmerich, a mystic, relates through her visions as recorded in The Dolorous Passion of Our Lord Jesus Christ that Our Lord, at the moment of His death on the Cross, descended to the Limbo of the Fathers, Purgatory, and the threshold of Hell. In the Limbo of the Fathers, He preached to the patriarchs, prophets, and other holy people who had died before Heaven was opened by His death (1 Peter 4:6). Included among these people were Adam and Eve.

What many people don’t know is that the site of Jesus’ Crucifixion on Mt. Calvary is exactly above the spot where Adam was interred.[1] The Body of the New Adam (Jesus) covered that of the Old Adam! Jesus also went to Purgatory. According to Anne Catherine Emmerich, Jesus even talked with Judas, who was in Hell, though Our Lord did not cross into Hell as Hell is and always will be absent of God.

According to these visions, Our Lord also commanded that the souls of nearly 100 of the holy people in the Limbo of the Fathers be reunited with their earthly bodies temporarily (cf. Matthew 27:52-53). He then commanded them to visit their relatives and preach the truth – that Jesus Christ is the Savior of the world Who had fulfilled the Old Testament. With the darkness and earthquakes too, many people were converted and believed after the Crucifixion. All of this took place within roughly one hour after Jesus died on the Cross.

During their short period of time on earth, these inhabitants of the Limbo of the Fathers did not have glorified bodies like Jesus did after His Resurrection. Their souls were merely reunited to the bodies they had prior to death, to fulfill the command of Jesus. Afterwards, their souls again left their bodies. At the time of the Last Judgment, all souls will be reunited with their bodies, but only the Elect will receive a glorified body.

The holy souls rejoiced at the sight of Our Lord, Who preached to them and explained to them how all the prophecies were completed in Him. And they also rejoiced in triumph on the Lord’s Ascension, forty days after His Resurrection, when Our Lord opened the gates of Heaven and entered as conqueror. He, the Victim of the Cross, was the one to open the gates of Heaven to the souls of those who had died and waited in the Limbo of the Fathers. And on that Ascension Day a great procession of Old Testament saints followed Christ into Heaven, where they enjoy the Beatific Vision. You see, no human nature could exist in Heaven prior to Christ’s human nature entering there.[2] Thus, had it not been for Christ’s Ascension, they would still be waiting in Limbo.[3]

[Editor’s Note: Christ’s Descent into Limbo was a popular theme for artists in Christendom. The painting above is a 14th century work by Andrea de Bonaiuto and is located in Santa Maria Novella, a church in Florence. It is interesting to note how the devil guarding these souls and preventing their escape is crushed beneath Christ’s triumphant entry. Numerous other depictions also show St. John the Baptist present, for he could “baptize” the souls upon their leaving Limbo as they accept Christ’s preaching. This is seen in Domenico Beccafumi’s 16th century work below, now located in Siena’s Pinacoteca Nazionale.]

While they are not in the Catholic Church’s Sanctoral Cycle (the “calendar of Saints” honored in the Liturgy, for example with a collect prayer at Mass), the Old Testament prophets and patriarchs – as well as other holy persons – are still venerated as saints and are mentioned in the Roman Martyrology[4] during the Office of Prime,[5] one of the traditional canonical hours of the Divine Office prayed seven times a day by the Church. We would do well to venerate them as well on their feast days throughout the year.

Here is a listing of some of the Old Testament saints found in the Roman Martyrology:

We may even pray a private Litany of the Old Testament Saints to invoke the intercession of these all too often forgotten saints in Heaven.[6] May they all intercede for us and our fallen world! 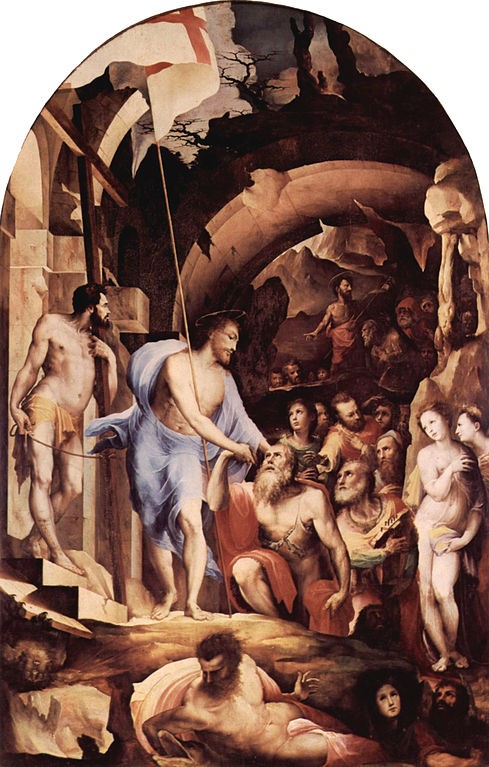 [1] If you ever see an image of the Crucifixion at Calvary and there is a skull at the base of the Cross, it is a representation of the skull of Adam, indicating it as the burial place of the First Man.

[2] This is one of the mysteries indicated by St. Paul when he calls Christ the “first-born”. Note the context of Colossians 1:12-15 is closely connected to the theme treated in this article: “Giving thanks to God the Father, Who hath made us worthy to be partakers of the lot of the saints in light: Who hath delivered us from the power of darkness, and hath translated us into the kingdom of the Son of His love, In whom we have redemption through His Blood, the remission of sins; Who is the image of the invisible God, the first-born of every creature” [emphasis added].

[4] The text of the Roman Martyrology is located on-line; it can also be purchased as a book.

[5] The entire Divine Office is located on-line, including the Office of Prime, at The Divinum Officium Project.