Blessed Karl and Fatima – Part I

Written by a guest writer – Hannah Houston | Blessed Karl is an example of a true Christian leader, despite the modern politically incorrect history…

Why Catholics Should Know Blessed Karl

Many Catholic prophecies –ancient and recent – speak of a glorious restoration of both the Church and civilization, under a great Pope and a great monarch. In addition, Our Lady at Fatima promised that Her Immaculate Heart would triumph. Such a triumph will not be possible if the Church and State are not united; if the East and West are still against one another. In today’s day and age, restoration seems impossible. To have a truly Catholic and pious ruler seems absurd. That is why we will discuss the importance of a great, yet not very well known, saintly figure: Blessed Karl, Emperor of Austria.

Blessed Karl is an example of a true Christian leader, despite the modern politically incorrect history which surrounds his life (in general, freemasonic deals dominate society and depict all Catholic monarchs negatively). It is no coincidence that at one of the most important moments of his life, Our Lady appeared at Fatima. In addition, since Blessed Karl was the last Catholic emperor, it would be no surprise if the prophesied ‘great monarch’ is one of his descendants. Blessed Karl and his rule serve as a foreshadowing of the figure who will rule during Our Lady’s triumphant reign. Today, August 17, 2022, marks the 135th anniversary of Bl. Karl’s birth, a ruler whose exemplary life each of us can learn from.

Remnant of the Holy Roman Empire

On November 21, 2021, the Republic of Austria announced the implementation of a vaccination mandate.[1] Per this declaration, the police were ordered to enact random vaccine checks and those found unvaccinated would face a fine of up to 4,000 euros, which could be renewed every three months, indefinitely.[2] Austria has been a republic for a little over 100 years but quite a different Austria had existed previously.

Although not thought of today as a dominant political or economic power, prior to 1919, Austria was one of Europe’s foremost nations. In fact, it was an empire, officially known as the Austro-Hungarian Empire. It was also thoroughly Catholic, ruled by a constitutional monarchy which was well loved by its subjects. This empire can be traced as far back as 1273 A.D. when Count Rudolf of Habsburg ruled the Holy Roman Empire.[3]

Most history books cite the Napoleonic Wars as ‘the end’ of the Holy Roman Empire, yet the empire was actually retained in Austria-Hungary under traditional Catholic Habsburg rule. One verification of the Empires’ vitality is presented in The Liturgical Year, by Dom Prosper Guéranger O.S.B., in the prayers of the ancient Good Friday service, which were prayed in the countries subject to Austria until recent times, stating, “Let us pray also for the most Christian emperor N…graciously look down on the Roman empire [.]”[4] Further evidence to the fact that the Holy Roman Empire was intact and that God did send special blessings upon this nation can be seen in more recent years, through one particular ruler, whose brief life we will now examine.

The Sacred Heart and Archduke Karl

Archduke Karl Franz Josef of the House of Habsburg was born on August 17, 1887, the grandnephew of the reigning Emperor Franz Josef. Archduke Karl was the fourth in line to rule, and it was assumed that his uncle, Franz Ferdinand, would marry and the royal line of succession would shift to his own children. From the very beginning of his life the young Archduke was noted for his concern for others and for being particularly spiritual. His Irish nurse remarked that, “He was happy about life and keen that others should be, also.”[5] From a very tender age he developed a devotion for the most Sacred Heart of Jesus. He was joyfully excited when, in 1899, Pope Leo XIII consecrated the world to the Sacred Heart of Jesus and asked that the bishops of the world join him in this act at their own Cathedrals.[6] The little Archduke dearly wanted to attend, but falling ill on the day, he was unable to join the consecration at St. Stephen’s Cathedral in Vienna. However, this did not prevent him from joining this consecration privately, which he did in the family’s castle chapel.[7]

Karl learned to trust in the Sacred Heart at a young age, and this devotion became a mainstay throughout his life. He once exclaimed: “It is so good to have faith in the Sacred Heart of Jesus. Without it, the hardships would be impossible to withstand.”[8] It was around this time that a religious, mystic and stigmatist, Mother Vinzentia of the Child Jesus, told Karl’s tutor: “People must pray much for the little archduke. Because someday he will become Emperor, he will have to suffer greatly, and will be a special target of hell.”[9]

Love and Death Turn the Course of History

Then, as is often the case in history, an unexpected problem related to love arose. The hither-to unmarried Franz Ferdinand decided to marry a woman considered outside the acceptable royal sphere. The Emperor was furious, but Franz Ferdinand would not change his mind. After much discussion it was agreed that he would be permitted to marry the fair Countess Sophie Chotek, but their children would not be allowed to reign. The royal line would shift to Otto, Karl’s father. Archduke Otto, however, suffered chronic illness and many assumed he would never live long enough to become emperor. The naysayers were correct, and on the Feast of All Saints (1906), Otto died at the age of 41.

The young Archduke Karl held a great love and respect for his parents, in spite of the coolness which existed between his father and mother. His father had lived in a rather undisciplined fashion, as is unfortunately all too customary in court life. Thus, the Archduke lived primarily with his mother, Princess Maria Josepha of Saxony. She ensured that he was well grounded in matters of the Catholic Faith and in his royal duties. Karl was naturally quite saddened at his father’s death, which was noted by many at Otto’s funeral.[10]

Archduke Karl finished his secondary education at the age of sixteen and decided to enter the Empire’s army. His entrance into the army was significant. Being a member of the royal family, he was not required or expected to take a profession. Royal family members held titles but did not often have knowledge of the profession attached to it. This incongruity was not Karl’s preference.[11] Instead, he sought to have a well-grounded knowledge of the duties expected of the Empire’s leader, a responsibility which was fast approaching. A military evaluation of the Archduke upon his coming-of-age tells us that he was fit for war, a stable character with a lively temperament, fluent in several languages, and had great intellectual gifts. More importantly, the evaluation describes Karl’s nature, saying, “Exemplary zealous, benevolent and filled with a strong sense of duty, he knows how to preserve male discipline and military spirit.”[12]

A Royal and Holy Marriage

During this time, Archduke Karl enjoyed simple living, and rejected the many luxuries available to his status.[13] This led the Emperor to worry about the marriage of his great-nephew; he did not want a repeat of Franz Ferdinand’s ‘fiasco’. Karl, however, was busy arranging his own marriage. In the spring of 1911, the Archduke’s aunt invited him to her hunting lodge.[14] The clever matchmaker also invited a young princess, Zita Bourbon-Parma, whom Karl had met years before. Zita had a merry, clever, pious, and lovely nature. She seemed to be just what the Empire needed.

In June of that same year, on the Feast of St. Anthony, they announced their engagement. The Emperor was particularly pleased with young Princess Zita. As was customary, Zita went to Rome to receive the blessing of the Holy Father, then Pope Pius X. During her audience the Holy Father stated: “I am very happy with this marriage, and I expect much from it for the future…. Karl is a gift from Heaven for what Austria has done for the Church.”[15]

The evening before their wedding, Archduke Karl told his betrothed, “We must now help each other get to Heaven,” showing his knowledge of the duty required of the married state.[16] Upon their wedding bands, the young couple had engraved the words, “Sub tuum praesidium confugimus, sancta Dei genitrix” (We fly unto Thy protection, O Holy Mother of God), thereby dedicating their marriage and new life together to the most Holy Mother of God. After they were married, they lived for a time in military housing, and then in a castle given to them by Emperor Franz Josef. Their first son, Otto, named after his unfortunate but loved grandfather, was born on November 20, 1912. The royal family lived simply and happily. But this blissful life would only last for two short years; and for the Archduke, it would never return.

To be continued… (Part II)

Readers who have enjoyed reading about this topic might also be interested in attending the Blessed Emperor-King Karl von Habsburg Symposium in Dallas, Texas on October 15, 2022. Speakers will include Bishop Athanasius Schneider, Archduke Eduard von Hapsburg, Hungarian Ambassador to the Holy See, and direct descendent of Emperor Franz Josef (Blessed Karl’s predecessor), an interview with with Princess Maria-Anna Hapsburg-Galitzine, granddaughter of Blessed Karl, and Suzanne Pearson.

Read about the Conference and get tickets HERE.

Fatima Perspectives #1357 Pope Francis has had plenty of criticism for the leaders of democratic regimes, primarily Donald…
byChris Ferrara
60 shares
60
0
0
0
No comments

Pope Lights Fuse at Synod for Demolition of Church Teaching

“Hope challenges us, moves us and shatters that conformism which says ‘it’s always been done like this.’” –…
byThe Fatima Center 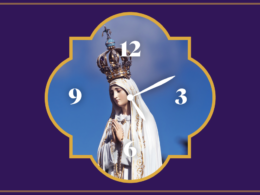 Marcello Pera on Pope Francis: Not the Gospel, but Politics