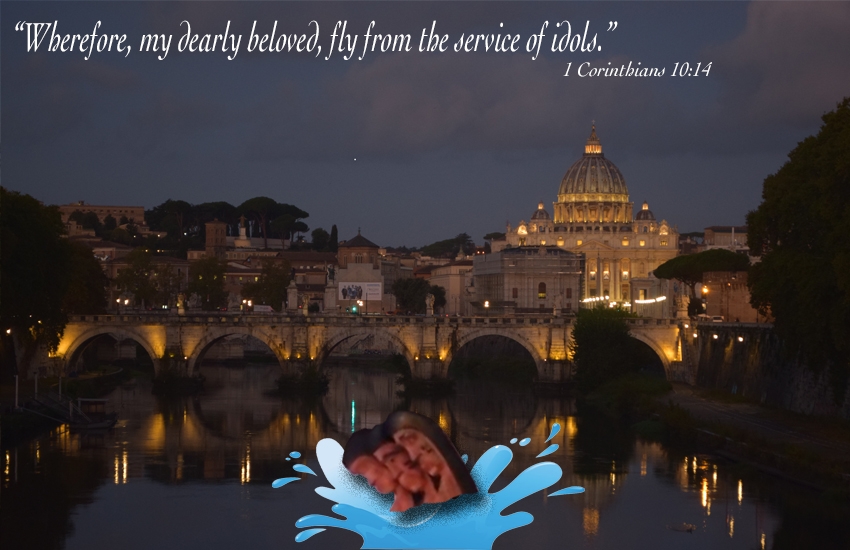 It’s being called the greatest news coming out of Rome in months!

Five of the Amazonian idols on display at the Vatican have been confiscated and thrown into the Tiber River by a handful of loyal Catholics, who in turn have circulated this on the Internet.

The trashing of the idols has been applauded by faithful Catholics the world over who are fed up with the profanation of the House of God that has been advanced through the Amazonian Synod presently underway in Rome.

Among the idols that were ‘drowned’ was the nude idol representing “Mother Earth” that has been adulated by the Vatican hierarchy as part of this synodal effort to make the Church bow to the planet. Francis and several cardinals were even filmed last week lighting candles and offering incense to the idol. Vatican rep denies claims that alleged ‘pagan’ statue is the Virgin Mary

It’s uncertain exactly how many of the idols are left in Rome. At least five were in the Church of Santa Maria Transpontina. In addition, there is at least one in the hall where the synod is being held and perhaps another in St. Peter’s Basilica, but we know that at least five of them are no longer desecrating the Church.

The group that did this cites their reason on the Internet:

This was done for only one reason:

Our Lord and Saviour Jesus Christ, His Blessed Mother, and everybody who follows Christ, are being attacked by members of our own Church.

We do not accept this! We do not longer stay silent! We start to act NOW!

Because we love humanity, we cannot accept that people of a certain region should not get baptized and therefore are being denied entrance into heaven.

There is no second way of salvation.

It is expected that this latest splash will continue to generate waves worldwide. In the meantime, hats off to those faithful witnesses of Christ who pulled this off for God’s glory! May it resound the world over!

Editor’s Note: The idol of Pachamama, which was shown and discussed in our 2019 Synod Report #7: All the Idol of Pagans are Demons, was thrown into the Tiber River. However, one should note that to destroy an idol it is best to burn it to ashes. Wooden idols tend to float and ‘survive’ being tossed into a river. It is now being reported that Roman police have found the tossed idols and have returned them to the Vatican. In an unexplainable and unimaginable act, Pope Francis has apologized to the Amazonians, stating that the idols will be housed within St. Peter’s highly protected area and then paraded in St. Peter’s Square on Sunday (Oct. 27, 2019) as part of the Synod’s concluding ceremony.

Perhaps this is an opportune moment to recall the heroism of Saint Publia of Antioch. She confronted the Emperor Julian ‘the Apostate’ (361-363 A.D.), who strove to bring paganism back to the Roman Empire after Emperor Constantine had legalized Christianity and outlawed the persecution of Christians. As Julian passed by the saint’s home, she and a number of holy widows and virgins loudly prayed the psalm verses:

But our God is in Heaven: He hath done all things whatsoever He would.
The idols of the gentiles are silver and gold, the works of the hands of men.
They have mouths and speak not: they have eyes and see not.
They have ears and hear not: they have noses and smell not.
They have hands and feel not: they have feet and walk not:
neither shall they cry out through their throat.
Let them that make them become like unto them:
and all such as trust in them.  – Psalm 113:11-17

The Emperor’s soldiers then beat St. Publia fiercely. She endured that suffering with great Christian virtue and heroism, but died shortly thereafter. The courage and blood of martyrs is the seed of Christianity!