Archbishop Viganò’s recent bombshell exposé detailing outrageous instances of systemic corruption and deceitfulness in the Roman Curia, and calling for the resignation of all parties implicated in the cover-up of Cardinal McCarrick’s history of sexual abuse – Pope Francis included – has dominated both secular and Church news sources for days.

The Archbishop’s surprise disclosure has been a “first” in a number of ways – coming from such a high-profile, unimpeachable, mainstream source, and carrying such a plain-spoken denunciation of the mafia-like homosexual cabal which has seized control of  the highest levels of Church governance.

“Francis is abdicating the mandate which Christ gave to Peter to confirm the brethren,” writes the Archbishop. “Indeed, by his action he has divided them, led them into error, and encouraged the wolves to continue to tear apart the sheep of Christ’s flock. In this extremely dramatic moment for the universal Church, he must acknowledge his mistakes and, in keeping with the proclaimed principle of zero tolerance, Pope Francis must be the first to set a good example for cardinals and bishops who covered up McCarrick’s abuses and resign along with all of them.” (Emphasis in original.)

But in fact, in terms of its subject matter, it is by no means a first. More than one hundred years ago, Our Lady of Fatima explicitly warned us of such scandals to come – and for the past forty years, The Fatima Center has been explaining and defending Our Lady’s true and complete Message, forcefully denouncing the moral and doctrinal collapse plaguing the post-Conciliar Church.

The Message of Fatima was given to the world as a timely warning of just such corruption overtaking the Church as a punishment for the sins of the world, unless by heeding Our Lady’s requests we avert the justice of God, invoking on our behalf the great merits of Her Immaculate Heart:

“[God] is about to punish the world for its crimes,” Our Lady of Fatima warned on July 13, 1917, “by means of war, hunger, and persecutions of the Church….  To prevent this, I shall come to ask for the consecration of Russia to My Immaculate Heart, and the Communion of Reparation on the First Saturdays. If My requests are heeded, Russia will be converted, and there will be peace; if not, she will spread her errors throughout the world, causing wars and persecutions of the Church.”

Sister Lucia (who at age ten had been one of the child-seers to whom Our Lady confided the Great Secret of Fatima, depicting in stark detail the horrible trials which the Church would suffer, barring Our Lady’s intervention), gave repeated testimony of a diabolic corruption of the clergy already well advanced in the years immediately following the Second Vatican Council. Many “blind” souls would be lost, she lamented, who would too-trustingly allow themselves to be led astray by the many churchmen of our day who are unworthy of their roles – themselves deceived, and misleading others:

“It is painful to see such a great disorientation and in so many persons who occupy places of responsibility [in the Church]….

“[T]he devil has succeeded in infiltrating evil under cover of good, and  …  in leading into error and deceiving souls having a heavy responsibility through the place which they occupy….  They are blind men guiding other blind men…, as the Lord tells us in His Gospel, and souls are letting themselves be deceived.

“Gladly I sacrifice myself and offer my life to God for peace in His Church, for priests and for all consecrated souls, especially for those who are so deceived and misled!”

As painful as Archbishop Viganò’s sordid revelations may be to some – whose loyalty and love for the Church make them cringe to see Her covered with such shame, and who are shocked to learn of such deviancy in leaders whom they once trusted – the truth is always a healthful, healing measure. If these disclosures serve no other end than to dispel the delusions of too-trusting souls, awakening them to the truth and urgency of Our Lady of Fatima’s warnings, they will have performed a great service to us all.

May God bless and protect Archbishop Viganò for his brave witness to the truth of the Church’s present situation, and may the Immaculate Heart of Mary quickly deliver us from the same, when at last Her requests given at Fatima are heeded!

And in the meantime, let us take Heaven’s admonition all the more to heart: “Pray, pray very much for the Holy Father!”

James Hanisch serves as a staff writer and author for The Fatima Center. He also serves as a moderator and content editor for its social media platforms.
View Posts 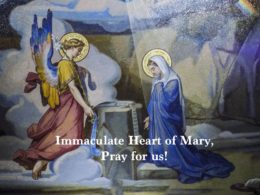 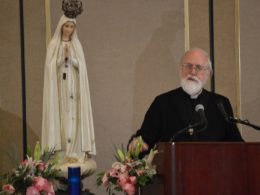 J.M.J. Father Gruner’s stamina was a frequent topic of discussion among Fatima Center staff, especially among those who…
byJoanna Swords 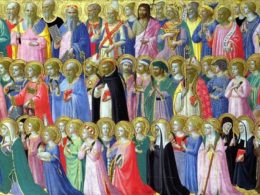 The Seven Traditional Categories of Saints 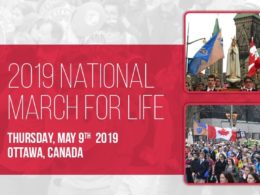