In Fatima Perspective #1262, posted the day after Christmas, I commented on Pope Francis’ “Urbi et Orbi” Message for Christmas, wherein he refers to “the fraternity that Jesus Christ has bestowed on us,” by which he meant not the members of His Mystical Body united in one Lord, one Faith and one Baptism, but rather all of humanity, “among persons of different religions”, the existence of which he declared to be “not a detriment or a danger; they are a source of richness.” There must be, said Francis, not the unity of mankind in the one true Church, to which all men are called, but rather simply “Fraternity among persons of diverse religions.”

On January 16, the One Peter Five website ran an important piece on how the Masons of the Grand Orient Lodge of Spain hailed Francis’ address precisely for its religious indifferentism, declaring: “All the Masons of the world unite themselves to the petition of the Pope for ‘fraternity between persons of diverse religions’.”  As the Masons of Spain exulted: “The words of the Pope show how far the Church has come from the content of Humanum Genus (1884), the last great Catholic condemnation of Masonry.”  A reference to the landmark encyclical of Leo XIII, summing up the Church’s entire teaching against the errors of Freemasonry.

The Magisterium of the Catholic Church has condemned Freemasonry as a threat to true religion and the good order of civil society almost from the moment it emerged as an anti-religion with the unification of the four lodges of England into the Grand Lodge of London in 1717.  That anti-religion is preached as a lowest-common-denominator “religion in which all men agree” as followed in Masonic “temples”. Nothing has since come in for a greater number of Magisterial condemnations than “the sect of the Freemasons,” as Pope Leo called it in Humanum Genus.

The capital error of the Freemasonic sect, Leo warned, is “the great error of this age — that a regard for religion should be held as an indifferent matter, and that all religions are alike. This manner of reasoning is calculated to bring about the ruin of all forms of religion, and especially of the Catholic religion, which, as it is the only one that is true, cannot, without great injustice, be placed in a bundle with the others.” (In the Italian: in un fascio con le altre, which has been altered in the English translation at Vatican.va to “merely equal to other religions.”  The Italian corresponds better to the original Latin text: “quae cum una ex omnibus vera sit…”]

The deity of the Masonic religion is not Christ, but the Great Architect of the Universe (G.A.O.T.U.), which can be any sort of deity a Mason imagines to exist, or no God at all but simply Nature, as Spinoza (excommunicated even by the synagogues of Holland) declared in his infamous equation of the two.

It would be facile to say merely that Francis has adopted the Freemasonic anti-religion.  But it would be dishonest to say that he is here defending the one true religion merely because he opines that the fraternity between men of all religions is “bestowed” by Christ.  What he has done, rather, is to suggest that Christ is the head of a Masonic-style pan-religious brotherhood in the sense that it is He who bestows “fraternity” upon the members of all religions. This the Masons would not do, as many of them are not even colorably Christian and even the most virulently anti-Christian atheists are welcome in the “temples” of Freemasonry.

But, by merely tacking Christ onto the Masonic idea of pan-religion, Francis effectively reduces Him to G.A.O.T.U., the distant God who does not command that anyone join any particular church, much less the Church that Christ, God Incarnate, founded as the sole ark of salvation and “purchased with His blood” (Acts 20:28). The Christ who merely bestows fraternity from afar, making no specific religious demands on men, is a kind of deistic Christ whose bare existence does not interfere in the practice of any religion whatsoever, or no religion at all.

Thus the Spanish Masons are quite right to declare that Francis confirms “how far the Church has come from the content of Humanum Genus (1884)…” Which is to say, how far the Church’s human element has wandered from the path of the Gospel, to which it seems only the most dramatic intervention of Heaven, under the mantle of Our Lady, can restore it.

With good reason did Leo conclude his resounding condemnation of Freemasonry with this invocation of the intercessory power of the Virgin Mother of God:  “Let us take as our helper and intercessor the Virgin Mary, Mother of God, so that she, who from the moment of her conception overcame Satan may show her power over these evil sects, in which is revived the contumacious spirit of the demon, together with his unsubdued perfidy and deceit.”

The Popes no longer speak this way. And that is why the Church is now in the midst of the worst crisis in her history, whose inevitable resolution will, however, constitute one of her greatest triumphs: the Triumph of the Immaculate Heart of Mary. 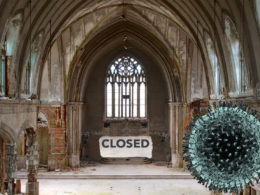 When the Church Becomes a Social Club, a Virus Shuts It Down 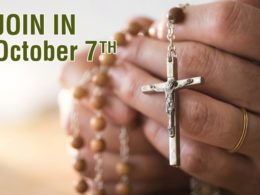 All across North America, Catholics will be praying the Rosary on October 7.

Let us join together in prayer for the conversion of our nations, and for the Consecration of Russia…
byThe Fatima Center