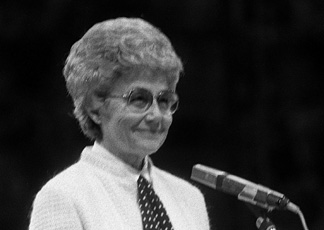 Sandro Magister has a piece on the alarming prospect of the “beatification” of Chiara Lubich, which may be imminent. Lubich founded the Focalare Movement, a utopian one-worlder cult of pan-religious brotherhood based, essentially, on herself and her “thought.”

All of the Focalarini, as they are called, must be devoted to the cult of Lubich, who died in 2008. Magister quotes the opening paragraph of a manuscript by Lubich from 1950, which expresses the nub of the problem. Never retracted, the following should, in and of itself, preclude any “beatification” of this woman:

“Every soul of the Focolari has to be an expression of mine and nothing else. My Word contains all of those of the focolarine and focolarini. I summarize all of them. So when I appear they must let themselves be engendered by me, commune with me. I too, like Jesus, must say to them: ‘And he who eats my flesh….’”

It should be no surprise that Lubich’s work as a utopian cult leader and religious indifferentist, who misappropriated the Church’s prestige for her “work,” had received just about every high honor the secularist powers could bestow. These included the Templeton Prize for Progress in Religion (1977), the UNESCO Prize for Peace Education (1996), and the Council of Europe’s Human Rights Prize (1998), as the Encyclopedia Britannica notes.  Yet John Paul II was fascinated by her, and indeed by all the “ecclesial movements” he saw as signs of life in a Church rendered largely moribund by the ruinous conciliar “renewal,” which he never ceased to praise.

The cause for Lubich’s beatification — is anyone surprised? — began during the current pontificate (in 2015), which evidently seeks to beatify or canonize anything that moved, so long as the process can be used to “infallibilize”  a “renewal” that has laid waste to the human element of the Church in large swaths of the ecclesial commonwealth.

If you believe these “revelations” of the “God of surprises,” you will believe in “Blessed” Chiara Lubich, whose cause will doubtless be supported by a “miracle” that would be laughed out of the room by the medical commission for Lourdes.

But at least there are some Jesuits, ironically enough, who think the proposed beatification is ridiculous and outrageous. One of these, cited by Magister, is Jean-Marie Hennaux, professor of the theology faculty of the Society of Jesus in Brussels and “author of the most biting critique published so far on the theological thought of Chiara Lubich, which he sees condensed” in the paragraph from the 1950 manuscript quoted above. Hennaux, writes Magister, has written an “evisceration of Lubich’s theology,” which he delivered to the bishop of Frascati, Raffaello Martinelli, “who had asked it of him shortly before officially opening the cause of beatification of the foundress of Focolare on January 27, 2015…”

Father Hennaux’s analysis, Magister notes, is “part of a multi-author volume published in 2017 and highly critical of the ‘sectarian tendencies’ not only of Focolare but also of other movements like Opus Dei, the Legionaries of Christ, and the Neocatechumenal Way: a volume that was also thought up in a hotbed of the Society of Jesus…” The book is available “both in French and – as an ebook – in Italian, and is entitled ‘From abuse to freedom. Sectarian tendencies within the Church. Testimonies and reflections.’”  That is, Hennaux confronts the emergence of sects within the Church, including Lubich’s.

Even the ultra-Modernist Cardinal Carlo Martini expressed reservations about Lubich and her movement, as Magister notes, according to the account of an ex-Focalarini, who wrote an exposé of the movement.

Quite simply, “Blessed” Chiara Lubich, should it come to that, will be yet another piece of the mounting evidence for the corruption of the process of beatification and canonization, which have been subverted for political ends.  The Church has never taught that beatifications are infallible, but the common opinion of theologians since the Middle Ages is that canonizations are, even if the Magisterium has never definitely pronounced on the matter.  Let us say that what is going on now in the field of beatification-canonization presents a new challenge for today’s theologians, given circumstances the theologians of the Middle Ages never had to consider and could not have imagined in their worst nightmares.