Vatican II and the Liturgical Collapse: Ignoring the Obvious

One Father Bill Peckman, a diocesan priest from Missouri, recites the grim statistic that there are 74.3 million Catholics in the US, plus “30 million who self identify as former Catholics.” Among the 74 million who still consider themselves Catholics, “only 23% go to Mass on any kind of regular basis.”  That would be a mere 17 million Catholics, out of a total of 104 million present and former Catholics, who make any effort to obey the fundamental law of the Church respecting attendance at Mass on the Sabbath.

Just a moment. Who said anything about Vatican II?  If the Council is utterly blameless for the collapse of faith and discipline that followed it immediately, why bring it up?  Indeed, why does anyone tie the Council to the collapse?  Is not the obvious and immediate temporal connection alone, putting aside the mountain of other evidence, reason to suspect that the Council had something to do with this mass apostasy?

Commentators who want to absolve the Council of any complicity in the ecclesial collapse, but who keep bringing it up anyway, are like the neighbor of the victim of a deadly home invasion who tells the police: “Some want to blame Smith just because he was seen near that house last night, but that would be a copout.”  To which any sensible detective would reply: “Smith?  Who said anything about Smith?  We need to question Smith.”

Father Peckman admits what we have seen since the Council is “tossing most any transcendence from Mass,” which “has had grave consequences,” but this disaster, says he, was “not call[ed] for by Vatican II or in the General Instruction of the Roman Missal…”

On the contrary, the Council’s liturgy constitution and the General Instruction were both the work of the infamous Annibale Bugnini and, after the Council, his Consilium, and it was precisely on the pretext of “obedience to the Council” that Pope Paul VI, approving Bugnini’s radical deconstruction and vernacularization of the Roman Rite, declared on November 26, 1969, in perhaps the single most astonishing address ever given by a Roman Pontiff:

“No longer Latin, but the spoken language will be the principal language of the Mass. The introduction of the vernacular will certainly be a great sacrifice for those who know the beauty, the power and the expressive sacrality of Latin. We are parting with the speech of the Christian centuries; we are becoming like profane intruders in the literary preserve of sacred utterance. We will lose a great part of that stupendous and incomparable artistic and spiritual thing, the Gregorian chant.

“We have reason indeed for regret, reason almost for bewilderment. What can we put in the place of that language of the angels? We are giving up something of priceless worth. But why? What is more precious than these loftiest of our Church’s values?”

Bugnini was sacked and sent off to Iran after Paul VI, by Bugnini’s own admission, was presented with a dossier on his Masonic affiliation (which he denied), following which Bugnini’s entire liturgical congregation was dissolved.  Too late, however, to undo his veritable destruction of the Roman Rite, as Msgr. Klaus Gamber described the outcome with the approval of the future Pope Benedict XVI, who wrote the French language preface to Gamber’s Reform of the Roman Liturgy wherein Gamber declares:

“[T]he traditional Roman rite, more than one thousand years old and until now the heart of the Church, was destroyed. The real destruction of the traditional Mass, of the traditional Roman Rite with a history of more than one thousand years, is the wholesale destruction of the faith on which it was based, a faith that had been the source of our piety and of our courage to bear witness to Christ and His Church… Many Catholics agonize over the question: what can be done about the loss of our faith and of our liturgy?”

Ignoring the role of the Council and the Pope who approved its disastrous liturgical implementation, Father Peckman instead lays the blame on “the tyranny of relativism,” “liberal clergy who knew better,” and “people who say that they are Catholic but are okay with abortion, artificial birth control, not going to Mass, and so on.” Yet in the same piece he clearly links the loss of faith to a loss of transcendence in the liturgy: “Parishes would do well to at least start doing Mass as the Church intends. You would be surprised at how few do. Transcendence needs to find its home again.”

Yes, parishes would do well “to at least start doing Mass as the Church intends.”  That is, the Church of all time, not the Church of Bugnini and the conflicted Pope who approved his ruinous invention and unleashed it upon the faithful, only to lament that: “The smoke of Satan has entered the temple of God through some crack: doubt, incertitude, dissension, worry, discontent, and conflict are plain to see….”

To Father Peckman I would say:  Bring the traditional Latin Mass back to your parish. Then watch it grow again.  People are drawn to majesty and sacredness and thus to the Mass that inculcates the Faith it presents. But when confronted with bathos and banality in the liturgy, the people, perceiving nothing of any great importance, vote with their feet and wander away.  For as the future Pope Benedict XVI once observed:  “But if in the liturgy the communion of faith no longer appears, nor the universal unity of the Church and of her history, nor the mystery of the living Christ, where is it that the Church still appears in her spiritual substance?” 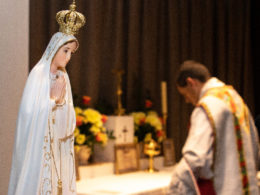 Our Lady Works in Mysterious Ways 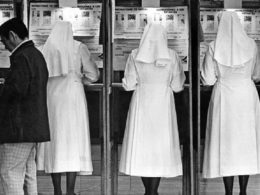 TO VOTE OR NOT TO VOTE Serious Catholics seem to have a knack for seeing problems everywhere. Because…
byJames Hanisch
No comments 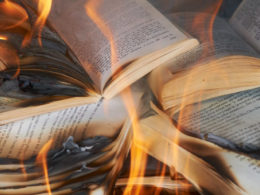 Should One Ban and Burn Books?

Read Part I: The Index of Forbidden Books  Sacred Scripture Sets the Example Ephesus was a major cosmopolitan…
byMatthew Plese
No comments 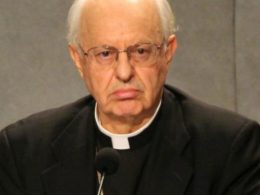 Fatima Perspectives #1245 As this column appears, Sandro Magister is reporting that, unlike the Phony Synod on “The…
byChris Ferrara