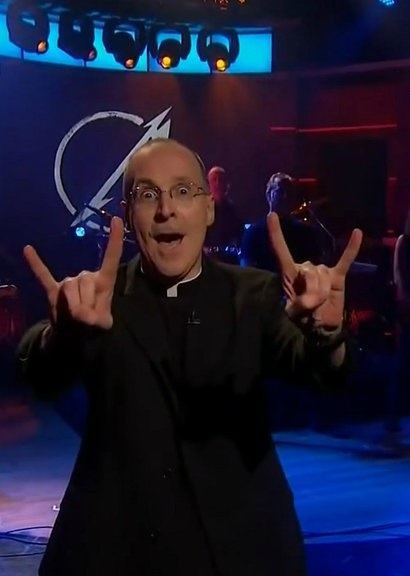 It would be easy to dismiss Father James Martin as a buffoon, if only he were not taken so seriously by high-ranking prelates in the midst of what is clearly the apostasy that “begins at the top,” as Cardinal Ciappi famously observed concerning the contents of the integral Third Secret of Fatima. Can the apostasy be any worse when Martin is permitted to prowl about the Church seeking the ruin of souls by “mainstreaming” sexual perversion?

Martin has been disinvited from several American speaking venues on account of the clear and present danger to the Faith of this priest “who uses his large social media following to advocate for the Catholic Church to embrace homosexuality.” Yet now we learn that the Vatican itself has invited him to address the 2018 World Meeting of “Families” in Dublin.  I place the word “Families” in skeptical quotation marks because, the way things have been going during this calamitous pontificate, it should be obvious that the good of families has little or nothing to do with this event, which will be yet another vehicle for ecclesial sedition, with Martin in a leading role.

As LifeSiteNews reports in the linked article, the event in Dublin is a “massive Vatican-sanctioned Catholic conference” at which Pope Francis himself will speak. “The gathering’s 2018 theme is Amoris Laetitia.”  Of course it is.  Amoris Laetitia has become a veritable charter for the subversion of sexual morality during this acute and seemingly terminal stage of the post-Vatican II crisis in the Church. Life Site quotes Austin Ruse of the Center for Family and Human Rights, who told LifeSite that “It is deeply disappointing but not at all surprising he was invited to this event.”  Exactly so.

Martin himself (as quoted by LifeSite from his Facebook account) is “delighted to share some news that has been in the works for some time. At the invitation of the Vatican’s Dicastery for Laity, Family and Life, and the Archdiocese of Dublin, I’ll be speaking at the World Meeting of Families in August, as part of the visit of Pope Francis to Ireland, on how the church can welcome families with LGBT members. The invitation sends a clear and powerful message from the Vatican to LGBT Catholics, their parents and their families: you belong and you are welcome.” Life Site notes that Martin told America magazine, the leading journal of liberal Jesuit subversion in the Church, that “I’m tremendously grateful for this invitation, not so much for what it says about my own ministry or writing but what it says to L.G.B.T. Catholics, a group of people who have for so long felt excluded. I hope they see this invitation, which had to be approved by the Vatican, as an unmistakable sign of welcome from the church.”

Martin, being the devious subversive that he is, knows full well that the Church welcomes each and every soul that seeks the truth of Christ and is willing to undergo the transformation in Christ made possible by membership in the Church and the sacramental life. The Church has never “excluded” anyone on account of a disordered sexual inclination unaccompanied by mortally sinful conduct or who, having committed grave sin, repents of it and returns to the state of grace. But, as Martin also knows, the Church does not “welcome” people on the basis of disordered sexual inclinations. Martin, however, is on a mission, sponsored by the Vatican itself, to invent a special category of sexually disordered persons whose disorders are no longer to be regarded as such but rather accepted as part of their ineradicable human identity.  The project is evil to its core.

Worse, if that were possible, the title of his Vatican-endorsed talk in Dublin will be “Exploring how Parishes can support those families with members who identify as LGBTI+”.  The plus sign is a distinct reference to an imaginary gender multiplicity, “in what may be the first instance of the Vatican seemingly denying the reality that there are only two genders.”

It is hard to imagine to what further depths the current ecclesial crisis can descend before Heaven intervenes to bring it to an end.  But amidst the fearful signs multiplying everywhere in the ecclesial commonwealth there is also hope.  For it cannot be much longer before we see what Our Lady of Good Success promised, which will involve the triumph of the Immaculate Heart of Mary following the long-delayed Consecration of Russia to Her:

“In order to free men from bondage to these heresies, those whom the merciful love of My Most Holy Son will destine for that restoration will need great strength of will, constancy, valor and confidence in God. To test this faith and confidence of the just, there will be occasions in which everything will seem to be lost and paralyzed. This will be, then, the happy beginning of the complete restoration.”