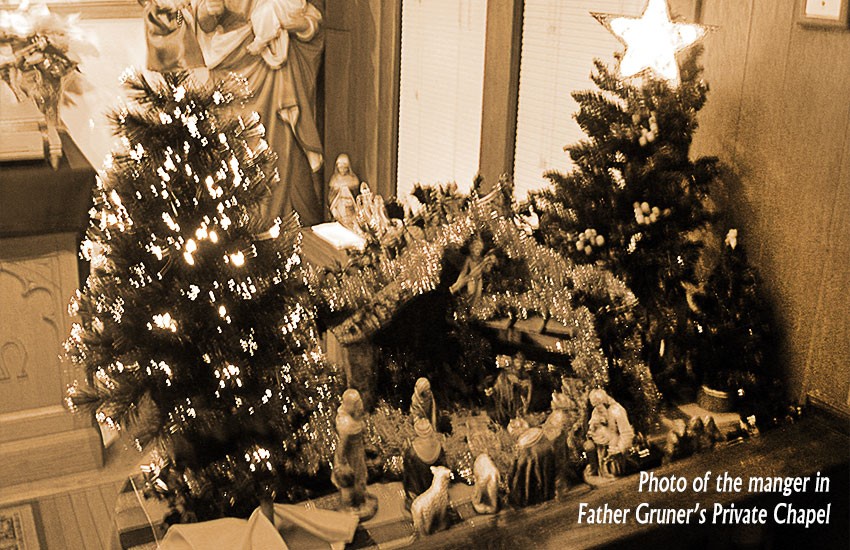 Years ago on December 24th in the afternoon, a few of us staff members who lived near Father, would go to his house to decorate while he was next door working in the office.

Under the guidance of Sister Frances, we first decorated Father’s private chapel, setting up the manger or crèche. Added to the Nativity Scene were two small decorated Christmas trees and other greenery reserved for the Christmas season.

Poinsettia plants were placed around the altar where Father offered the Holy Sacrifice of the Mass as well as elsewhere in the sanctuary. Lighted wreathes were placed on the two small windows located on either side of the altar.

Andrew and Joseph prepared the altar, changing the linens, setting out new candles with clean polished followers, and making all of the other various preparations for Midnight Mass.

Beautiful red roses given as a gift for Our Lady were placed before the Pilgrim Virgin statue standing by the altar.

The purple cape which throughout Advent had adorned the special Infant of Prague statue, located on a pedestal in the sanctuary, was removed and replaced by a white garment in keeping with the joyous Christmas Season which would begin in just a few hours.

Of course, because of the presence of the Blessed Sacrament, all of this was done in silence – only Sister spoke when needed in order to give directions to her helpers – and we women had our heads covered appropriately and respectfully in the presence of Our Lord.

After decorating the chapel, we proceeded to decorate the living room, setting up a 6-foot tall Christmas tree by Father’s favorite chair, and a Christmas crib was placed nearby.

Father’s kitchen was also decorated and preparations were begun for the celebration and feast that would begin at about 1:45 a.m., following Midnight Mass.

Changing the table linens to a festive bright red, the table was set using special placemats, the faces of which had been made using pictures of the Gruner homestead where Father was raised in Montreal. One of the placemats had a picture of the family’s living room which had a large fireplace. On another was a picture of the outside of the homestead and property covered in unblemished snow. They were heartwarming pictures.

Once the preparations were completed we all departed, anxiously anticipating our return only a few brief hours later for Midnight Mass, preceded by the Holy Rosary of the Blessed Virgin Mary.

At midnight, Father processed into the chapel carrying a small replica of the infant Jesus and placed it in the manger before beginning Mass. At least 12–15 people came to Midnight Mass, a combination of Fatima Center staff members, volunteers and their family members.

After Mass, food and drink were set out and Father invited everyone present to join in celebrating the Feast of the Nativity of Our Lord. After saying Grace, a toast was made honoring the birth of Our Lord and petitioning Heaven for the Triumph of the Immaculate Heart of Mary.

Father so enjoyed the gathering of people in his home and was a most gracious host. They were truly joyous and blessed Christmas gatherings.

It was a precious gift – beginning with the greatest gift of all, the Holy Sacrifice of the Mass – sharing these repasts and the accompanying conversation with a pious priest and with others whose lives centered on the eternal Catholic Faith and the necessity of the Message of Fatima in preserving that Faith in the hearts of men.