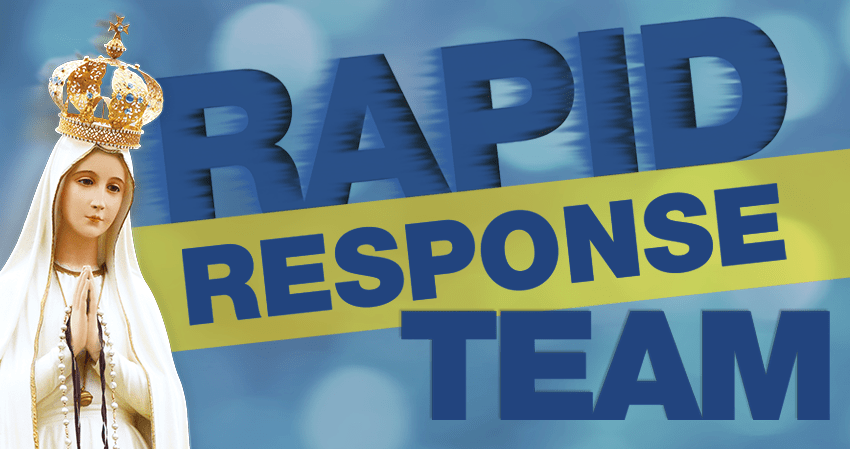 The Rapid Response Team Is in the Fight!

The truth is being assaulted on all sides – even within the Church! Our Lady’s Apostolate has formed a special unit, ready to be dispatched wherever and whenever terrible and sacrilegious insults are hurled against Our Lord, Our Lady and our Holy Faith. These committed warriors have taken the fight to the enemy on several fronts already and are prepared to travel anywhere and to do what needs to be done to uphold the truth!

The Rapid Response Team went to Oklahoma City when a black mass was scheduled in a public building on the Feast of the Assumption in 2016.  The team rallied with other forces on the ground there. Processions, Rosaries, and the Holy Mass were offered in reparation for the planned public sacrilege allowed by the city and perpetrated by satanists! The media came. The people saw that blasphemy will not go unanswered! Click to see photos and more

The Rapid Response Team went to Sweden in October 2016, where the arch-heretic and wrecker of Christendom, Martin Luther, was being commemorated in a public ceremony – in which Pope Francis was participating! The team passed out pamphlets explaining Luther’s heresy and proclaiming Catholic truth. Reparation was made by means of a Rosary procession through the streets of Lund, with the Pilgrim Virgin Statue and signs which professed Catholic teaching while protesting ecumenical falsehoods. The Pope himself saw the team in Malmo and the signs urging him to stand for the truth! And the media again witnessed and reported on this valiant defense of the Faith. Click to see photos and more

The Rapid Response Team went to Rome in March of 2017, where Anglican “vespers” were being said by a group of professed heretics and clerical impostors of the Church of England – within St. Peter’s Basilica, at the very chair of St. Peter! The team processed with the Pilgrim Virgin Statue near the Vatican and passed out literature explaining the heresies of the “church” founded by the murdering adulterer King Henry VIII. Prayers of public reparation were offered for this public insult to the Holy Catholic Faith in the very precincts of the most venerated place in Rome. The team was there. The team was noticed. Once again, falsehood was exposed. Reparation was made. Click to see photos and more

The Rapid Response Team is ready to go wherever it must. But it needs your prayers. It needs your support. These trips must be organized quickly. Materials must be written and printed post-haste. A plan must be formed and executed. But if you provide prayer support and financial assistance, the team will do the rest! Support the troops on the front line! They are fighting for Our Lord, Our Lady, our Holy Catholic Faith, for you and all Catholics!

Keeping Our Lady’s websites online and updated costs many thousands of dollars each month. We rely totally on the prayers and freewill offerings. Won’t you please help us send Our Lady’s Fatima Message to millions of souls through the power of the Internet? Please DONATE to help keep Our Lady online.