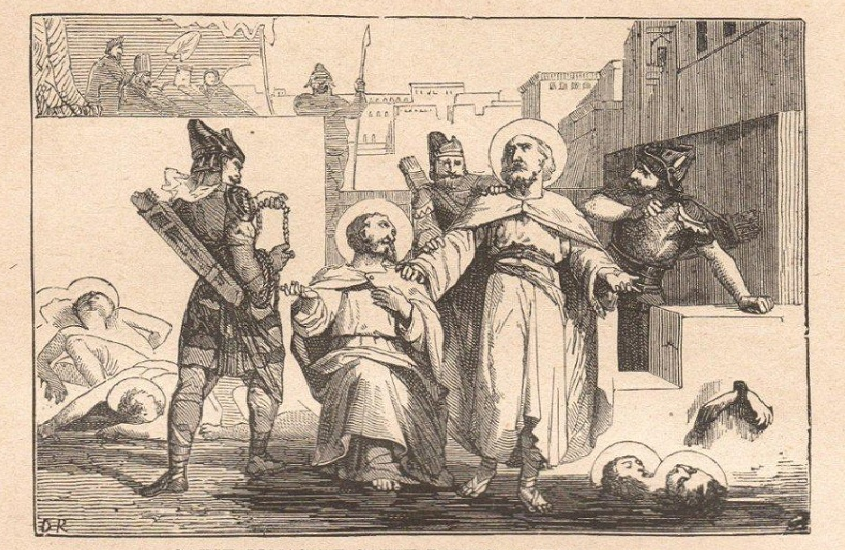 KING SAPOR, of Persia, in the eighteenth year of his reign, raised a bloody persecution against the Christians, and laid waste their churches and monasteries, Jonas and Barachisius, two brothers of the city Beth-Asa, hearing that several Christians lay under sentence of death at Hubaham, went thither to encourage and serve them. Nine of that number received the crown of martyrdom. After their execution, Jonas and Barachisius were apprehended for having exhorted them to die. The president entreated the two brothers to obey the king of Persia, and to worship the sun, moon, fire, and water. Their answer was, that it was more reasonable to obey the immortal King of heaven and earth than a mortal prince. Jonas was beaten with knotty clubs and with rods, and next set in a frozen pond, with a cord tied to his foot. Barachisius had two red-hot iron plates and two red-hot hammers applied under each arm, and melted lead dropped into his nostrils and eyes; after which he was carried to prison, and there hung up by one foot. Despite these cruel tortures, the two brothers remained steadfast in the Faith. New and more horrible torments were then devised under which at last they yielded up their lives, while their pure souls winged their flight to heaven, there to gain the martyr’s crown, which they had so faithfully won.

Reflection. —Those powerful motives which supported the martyrs under the sharpest torments ought to inspire us with patience, resignation, and holy joy under sickness and all crosses or trials. Nothing is more heroic in the practice of Christian virtue, nothing more precious in the sight of God, than the sacrifice of patience, submission, constant fidelity, and charity in a state of suffering.