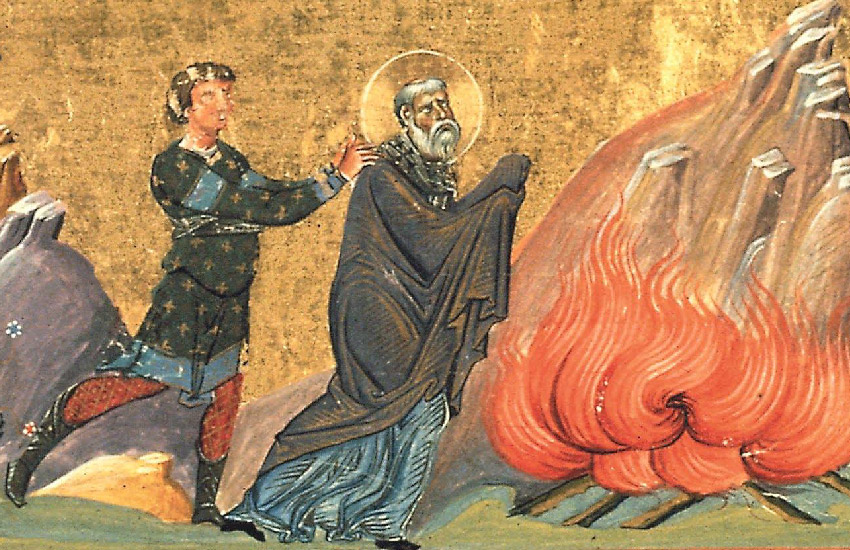 ST. POLYCARP, Bishop of Smyrna, was a disciple of St. John. He wrote to the Philippians, exhorting them to mutual love and to hatred of heresy. When the apostate Marcion met St. Polycarp at Rome, he asked the aged Saint if he knew him. “Yes,” St. Polycarp answered, “I know you for the first-born of Satan.” These were the words of a Saint most loving and most charitable, and specially noted for his compassion to sinners. He hated heresy, because he loved God and man so much. In 167, persecution broke out in Smyrna. When Polycarp heard that his pursuers were at the door, he said, “The will of God be done; ” and meeting them, he begged to be left alone for a little time, which he spent in prayer for “the Catholic Church throughout the world.” He was brought to Smyrna early on Holy Saturday; and, as he entered, a voice was heard from heaven, “Polycarp, be strong.” When the proconsul besought him to curse Christ and go free, Polycarp answered, “Eighty-six years I have served Him, and He never did me wrong; how can I blaspheme my King and Saviour?” When he threatened him with fire, Polycarp told him this fire of his lasted but a little, while the fire prepared for the wicked lasted forever. At the stake he thanked God aloud for letting him drink of Christ’s chalice. The fire was lighted, but it did him no hurt; so he was stabbed to the heart, and his dead body was burnt. “Then,” say the writers of his acts, “we took up the bones, more precious than the richest jewels or gold, and deposited them in a fitting place, at which may God grant us to assemble with joy to celebrate the birthday of the martyr to his life in heaven!”

Reflection .—If we love Jesus Christ, we shall love the Church and hate heresy, which rends His mystical body, and destroys the souls for which He died. Like St. Polycarp, we shall maintain our constancy in the faith by loves of Jesus Christ, Who is its author and its finisher.
Lives Of The Saints By Alban Butler, Benziger Bros. Edition www.globalgrey.co.uk

Saint Polycarp was one of the most illustrious of the apostolic fathers, who, being the immediate disciples of the apostles, received instructions from their mouths, and inherited of them the spirit of Christ, in a degree so much the more eminent, as they lived nearer the fountain head. He embraced Christianity very young, about the year 80; was a disciple of the apostles, in particular of St. John the Evangelist, and was constituted by him bishop of Smyrna, probably before his banishment to Patmos, in 96: so that he governed that important see seventy years. He seems to have been the angel or bishop of Smyrna, who was commended above all the bishops of Asia by Christ himself in the Apocalypse, and the only one without a reproach. Our Saviour encouraged him under his poverty, tribulation, and persecutions, especially the calumnies of the Jews, called him rich in grace, and promised him the crown of life by martyrdom. This saint was respected by the faithful to a degree of veneration. He formed many holy disciples, among whom were St. Irenæus and Papias. When Florinus, who had often visited St. Polycarp, had broached certain heresies, St. Irenæus wrote to him as follows: “These things were not taught you by the bishops who preceded us. I could tell you the place where the blessed Polycarp sat to preach the word of God. It is yet present to my mind with what gravity he everywhere came in and went out: what was the sanctity of his deportment, the majesty of his countenance and of his whole exterior, and what were his holy exhortations to the people. I seem to hear him now relate how he conversed with John and many others, who had seen Jesus Christ; the words he had heard from their mouths. I can protest before God, that if this holy bishop had heard of any error like yours, he would have immediately stopped his ears, and cried out, according to his custom: Good God! that I should be reserved to these times to hear such things! That very instant he would have fled out of the place in which he had heard such doctrine.”

The epistle of St. Polycarp to the Philippians, which is the only one among those which he wrote that has been preserved, is, even in the dead letter, a standing proof of the apostolic spirit with which he was animated, and of that profound humility, perfect meekness, burning charity, and holy zeal, of which his life was so admirable an example. The beginning is an effusion of spiritual joy and charity with which he was transported at the happiness of their conversion to God, and their fervor in divine love. His extreme abhorrence of heresy makes him immediately fall upon that of the Docætæ, against which he arms the faithful, by clearly demonstrating that Christ was truly made man, died, and rose again: in which his terms admirably express his most humble and affectionate devotion to our divine Redeemer, under these great mysteries of love. Besides walking in truth, he takes notice, that to be raised with Christ in glory, we must also do his will, keep all his commandments, and love whatever he loved; refraining from all fraud, avarice, detraction, and rash judgment; repaying evil with good, forgiving and showing mercy to others that we ourselves may find mercy. “These things,” says he, “I write to you on justice, because you incited me; for neither I, nor any other like me, can attain to the wisdom of the blessed and glorious Paul, into whose epistles if you look, you may raise your spiritual fabric by strengthening faith, which is our mother, hope following, and charity towards God, Christ, and our neighbor preceding us. He who has charity is far from all sin.” The saint gives short instructions to every particular state, then adds; “Everyone who hath not confessed that Jesus Christ is come in the flesh, is antichrist; and who hath not confessed the suffering of the cross, is of the devil; and who hath drawn the oracles of the Lord to his passions, and hath said that there is no resurrection nor judgment, he is the oldest son of Satan.” He exhorts to watching always in prayer, lest we be led into temptation; to be constant in fasting, persevering, joyful in hope, and in the pledge of our justice, which is Christ Jesus, imitating his patience; for, by suffering for his name, we glorify him. To encourage them to suffer, he reminds them of those who had suffered before their eyes: Ignatius, Zozimus, and Rufus, and some of their own congregation, “who are now,” says our saint, “in the place which is due to them with the Lord, with whom they also suffered.”

Connection for our times: More than once we see our Saint forcefully confront heretics. It seems that in our age there is no room for such zeal in the Church, and often those who confront those who lead souls astray are labeled as “uncharitable.” In truth, truth there is nothing more charitable than calling out heresy, as it will ultimately lead to the death of the soul. Let us pray for the bold resolve that Saint Polycarp had, as we face untold amounts of error and heresy in our day.