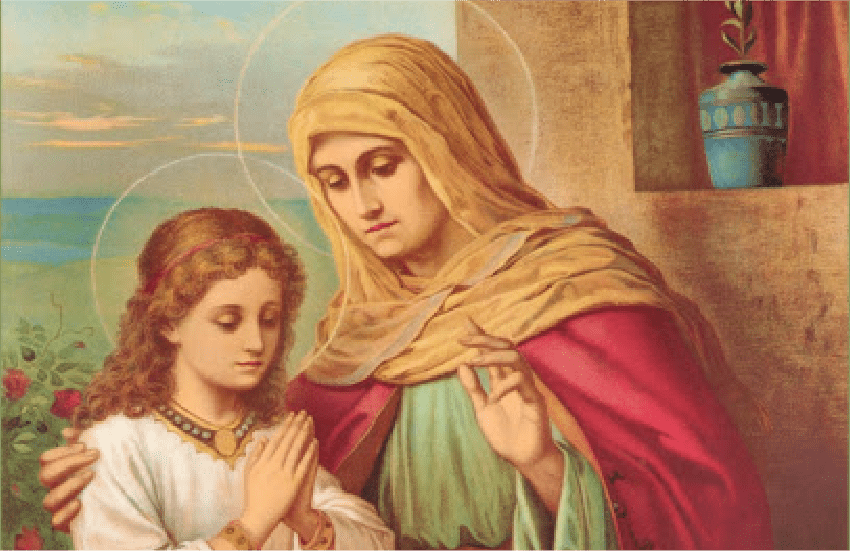 ST. ANNE was the spouse of St. Joachim, and was chosen by God to be the mother of Mary, His own blessed Mother on earth. They were both of the royal house of David, and their lives were wholly occupied in prayer and good works. One thing only was wanting to their union.—they were childless, and this was held as a bitter misfortune among the Jews. At length, when Anne was an aged woman, Mary was born, the fruit rather of grace than of nature, and the child more of God than of man. With the birth of Mary the aged Anne began a new life: she watched her every movement with reverent tenderness, and felt herself hourly sanctified by the presence of her immaculate child. But she had vowed her daughter to God, to God Mary had consecrated herself again, and to Him Anne gave her back. Mary was three years old when Anne and Joachim led her up the Temple steps, saw her pass by herself into the inner sanctuary, and then saw her no more. Thus was Anne left childless in her lone old age, and deprived of her purest earthly joy just when she needed it most. She humbly adored the Divine Will, and began again to watch and pray, till God called her to unending rest with the Father and the Spouse of Mary in the home of Mary’s Child.

Reflection. —St. Anne is glorious among the Saints, not only as the mother of Mary, but because she gave Mary to God. Learn from her to reverence a divine vocation as the highest privilege, and to sacrifice every natural tie, however holy, at the call of God.