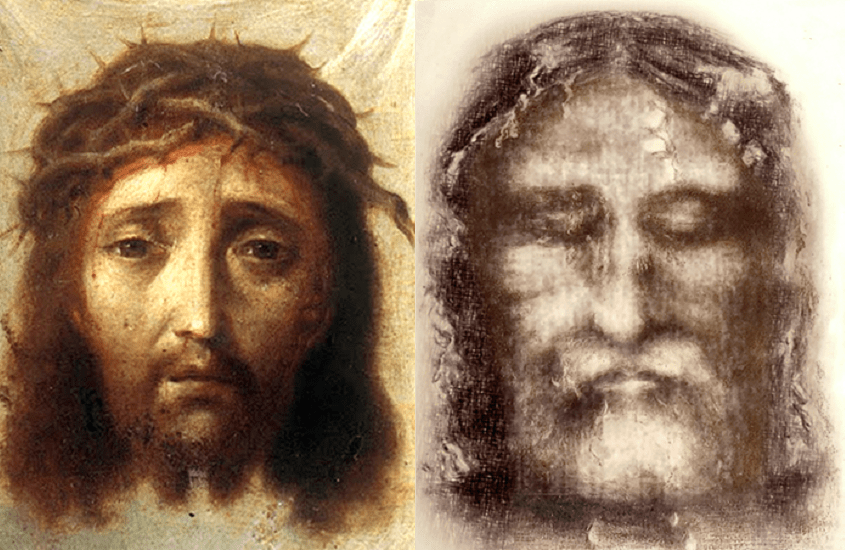 Dear Friend of our Lady,

An integral part of the Fatima Message is making reparation for sins – our own and the sins of others.

Our Lady’s Fatima Message is the culmination of requests made by God throughout the history of mankind to make reparation or atonement for sins. Such requests or warnings for making reparation were given both in Sacred Scripture and through messengers entrusted by Heaven after Christ’s Ascension.

Two of those messengers were sent in the 19th and 20th centuries to ask for reparation to the Holy Face of Jesus for sins which have increased significantly since the original requests were made and continue to increase to the present day.

Two years ago Our Lady’s apostolate published and sent to supporters the booklet by John Vennari, The Revelations of the Holy Face of Jesus.

This booklet focuses on making reparation to the Holy Face of Jesus of the Veil of Veronica for sins involving the first three Commandments of God. That is, for the sins of:

Blasphemy – A sin against the Second Commandment (Thou shalt not take the name of the Lord Thy God in vain). It includes coarse blasphemy such as the irreverent use of God’s name, speaking disrespectfully about holy things, breaking vows, and the doctrinal blasphemy of the free-thinker (i.e. modernist, freemason, hedonist, atheist, etc.)

Violation and Profanation of Sundays and Holy Days – A sin against the Third Commandment (Remember thou keep holy the Sabbath [Lord’s] day). It includes missing Mass on Sundays and Holy Days of obligation without grave and sufficient cause, and performing undue servile work or unnecessary public buying and selling on these days.

Communism – Another sin against the Second Commandment. It includes crimes committed by the Secret Societies against Christ’s true Church. In March 1847, Our Lord specifically identified the Communists, by name, as His enemies.[1]

Sins against the Catholic Faith – These are sins against the First Commandment (I am the Lord thy God, thou shalt not have strange gods before Me). It includes indifferentism (holding false religions on a par with the true one, as if differences of creed are unimportant), taking part in non-Catholic worship, heresy (denying one or more dogmas of the Faith), apostasy (falling away from the one True Church of Christ, the Catholic Church). The sins of idolatry, superstition, spiritism, occult practices, tempting God, and sacrilege are also violations of this commandment.

The messenger chosen by God – to make known to the world His request for reparation for the above sins by a devotion to the image of His Holy Face left on the Veil of Veronica – was a French Carmelite, Sister Marie de Saint-Pierre (1816 – 1848).

The Holy Face of the Shroud of Turin

Enclosed with this letter is a reprint of a prayer card that The Fatima Center printed and made available to supporters more than 20 years ago. It is the Devotion to the Holy Face of Jesus of the Shroud of Turin.

The devotion was introduced to Our Lady’s Apostolate by Father Marcel Nault (R.I.P.), a friend of Father Gruner’s and The Fatima Center, who years ago worked closely with Father and helped spread the Fatima Message (see Issue 47 of The Fatima Crusader).

The text on the back of the prayer card has been revised and updated from the original prayer card of many years ago.

For many years, the two devotions to the Holy Face of Jesus – that is, of the Veil of Veronica (VV) and of the Shroud of Turin (ST) have been mixed and even confused by some as the same devotion.

While these two devotions are certainly closely related, they are two distinct and different devotions revealed and given to the world by Our Lord:

– utilizing two different sets of prayers and means of making reparation (see the booklet, The Revelations of the Holy Face of Jesus by John Vennari for the VV, and the back of the enclosed prayer card for the ST);

– on two different days of the week (Sundays and Holy Days for the VV, Tuesdays for the ST);

The key similarities between the two devotions is that they are both requests for [1] making reparation by honoring [2] the Holy Face of Jesus. But they are also two different images of His Holy Face – one image obtained while Our Lord was still alive (Veil of Veronica), and the other image obtained after His death (Shroud of Turin). As reasonable Catholics of faith, we should not see in these two devotions a contradiction or opposition. Rather, we should by grateful that God permits us different insights into the great mystery of His Incarnation and suffering as revealed in His most Adorable Face.

As previously stated, the messenger chosen by God to reveal the reparatory devotion to the Holy Face of Jesus of the Shroud of Turin was Sister (Mother) Maria Pierina de Micheli (1890 – 1945), a religious sister in the Convent of the Immaculate Conception in Rome.

At a young age Giuseppina (Josephine) de Micheli was given the grace of understanding what it means to “suffer in reparation for offenses against Jesus.”

On the first Friday of Lent in 1936, while praying in the chapel of the convent, Jesus appeared to her – His face covered with blood, and with profound sadness He said to her: “I desire that My Face, which reflects the deep anguish of My Soul, and the sorrow and love of My Heart, be more honored! He who contemplates Me, consoles Me…”

Our Lord appeared to her repeatedly with the same request that souls meditate upon His Holy Face. On Tuesday of Passion Week, 1936, Jesus returned and told her: “Each time My Face is contemplated I will pour My Love into hearts, and through My Holy Face many souls will be saved.”

In 1938, while praying in the chapel, the Immaculate Virgin appeared to Sister Pierina holding a scapular made of two pieces of white flannel, joined by a cord. On one side was the image of the Holy Face with the words: “Illumina, Domine Vultum Tuum Super Nos” (Let Thy Face shine upon us, O Lord!) surrounding the image.

On the other side was an image of a Sacred Host surrounded by rays of light, having the words: “Mane Nobiscum Domine” (Stay with us, O Lord) surrounding the image.

The Blessed Virgin told Sister Pierina: “[T]his scapular is a weapon of defense, a shield of strength, a pledge of love and mercy which Jesus wishes to give to the world in these times of sensuality and hatred against God and the Church. Diabolic snares are being laid to tear the Faith from men’s hearts, and evil spreads. True apostles are few, a Divine remedy is necessary, and this remedy is the Holy Face of Jesus.

“All those who shall wear a scapular like this (later the Blessed Virgin told her that a medal could be used instead), and will make, if possible, a visit to the Blessed Sacrament every Tuesday, in reparation for the outrages that the Holy Face of My son Jesus received during His Passion, and which He receives daily in the Sacrament of the Holy Eucharist, will:

1. Be strengthened in the Faith;
2. Be prompt to defend the Faith;
3. Overcome all difficulties, internal and external;
4. Be granted a peaceful, holy death under the loving gaze of My Divine Son.”

In November 1938 during Adoration of the Blessed Sacrament, Our Lord again appealed to Sister Pierina saying:

“I desire that It be honored by a special Feast on Tuesday in Quinquagesima (Shrove Tuesday – the Tuesday before Ash Wednesday). The Feast will be preceded by a Novena in which the faithful make reparation with Me, uniting themselves in participating with Me in My sorrow.”

Pray five Glory Be’s daily to console Our Lord and to make reparation for the outrages which He received during His Passion, and which He continues to receive every day in the Sacrament of the Holy Eucharist. Outrages such as:

[1] The quote comes from the bottom of p. 22 of The Revelations of the Holy Face of Jesus by John Vennari (see here). A source citation is the following: “Sister Saint-Pierre writes: ‘He has commanded me to make war on the Communists, telling me they are enemies of the Church and of her Christ.’ [Abbe P. Janvier, The Life of Sister Saint-Pierre, (John Murphy & Co, Baltimore, 1884), pp. 294-295.]”