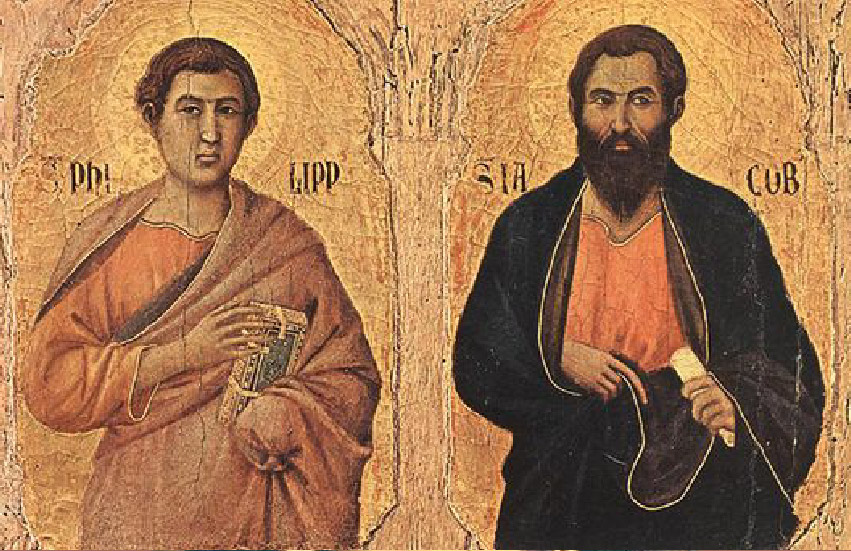 PHILIP was one of the first chosen disciples of Christ. On the way from Judea to Galilee Our Lord found Philip, and said, “Follow Me” Philip straightway obeyed; and then in his zeal and charity sought to win Nathaniel also, saying, “We have found Him of Whom Moses and the prophets did write, Jesus of Nazareth;” and when Nathaniel in wonder asked, “Can any good come out of Nazareth?” Philip simply answered, “Come and see,” and brought him to Jesus. Another characteristic saying of this apostle is preserved for us by St. John. Christ in His last discourse had spoken of His Father; and Philip exclaimed, in the fervor of his thirst for God, “Lord, show us the Father, and it is enough”

St. James the Less, the author of an inspired epistle, was also one of the Twelve. St. Paul tells us that he was favored by a special apparition of Christ after the Resurrection. On the dispersion of the apostles among the nations, St. James was left as Bishop of Jerusalem; and even the Jews held in such high veneration his purity, mortification, and prayer, that they named him the Just. The earliest of Church historians has handed down many traditions of St. James’s sanctity. He was always a virgin, says Hegesippus, and consecrated to God. He drank no wine, wore no sandals on his feet, and but a single garment on his body. He prostrated himself so much in prayer that the skin of his knees was hardened like a camel’s hoof. The Jews, it is said, used out of respect to touch the hem of his garment. He was indeed a living proof of his own words, “The wisdom that is from above first indeed is chaste, then peaceable, modest, full of mercy and good fruits.” He sat beside St. Peter and St. Paul at the Council of Jerusalem; and when St. Paul at a later time escaped the fury of the Jews by appealing to Cæsar, the people took vengeance on James, and crying, “The just one hath erred,” stoned him to death.

Reflection. —The Church commemorates on the same day Sts. Philip and James, whose bodies lie side by side at Rome. They represent to us two aspects of Christian holiness. The first preaches faith, the second works; the one holy aspirations, the other purity of heart.