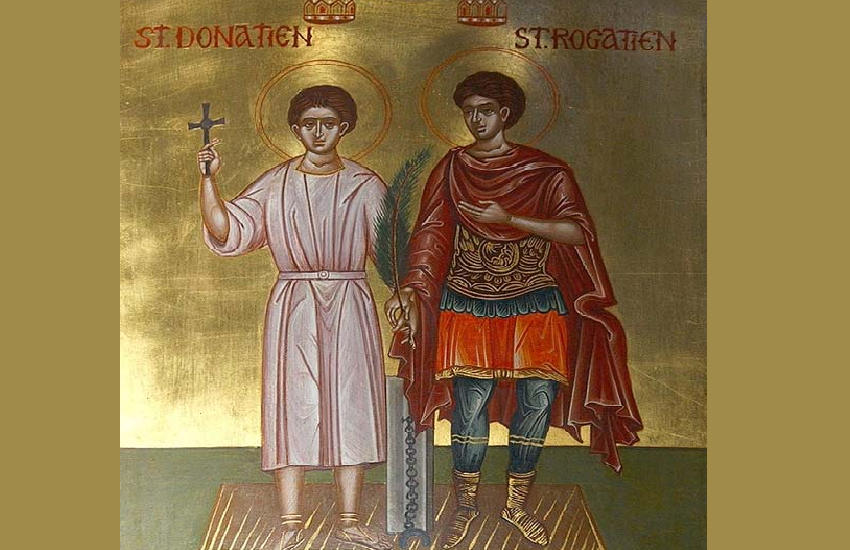 HERE lived at Nantes an illustrious young nobleman named Donatian, who, having received the holy Sacrament of Regeneration, led a most edifying life, and strove with much zeal to convert others to faith in Christ. His elder brother, Rogatian, was not able to resist the moving example of his piety and the force of his discourses, and desired to be baptized. But the bishop having withdrawn and concealed himself for fear of the persecution, he was not able to receive that sacrament, but was shortly after baptized in his blood; for he declared himself a Christian at a time when to embrace that sacred profession was to become a candidate for martyrdom. Donatian was impeached for professing himself a Christian, and for having withdrawn others, particularly his brother, from the worship of the gods. Donatian was therefore apprehended, and having boldly confessed Christ before the governor, was cast into prison and loaded with irons. Rogatian was also brought before the prefect, who endeavored first to gain him by flattering speeches, but Ending him inflexible, sent him to prison with his brother. Rogatian grieved that he had not been able to receive the Sacrament of Baptism, and prayed that the kiss of peace which his brother gave him might supply it. Donatian also prayed for him that his faith might procure for him the effect of Baptism, and the effusion of his blood that of the Sacrament of Confirmation. They passed that night together in fervent prayer. They were the next day called for again by the prefect, to whom they declared that they were ready to suffer for the name of Christ whatever torments were prepared for them. By the order of the inhuman judge they were first stretched on the rack, afterwards their hands were pierced with lanced, and lastly cut off, about the year 287.

Reflection. —Three things are pleasing unto God and man: concord among brethren, the love of parents, and the union of man and wife.