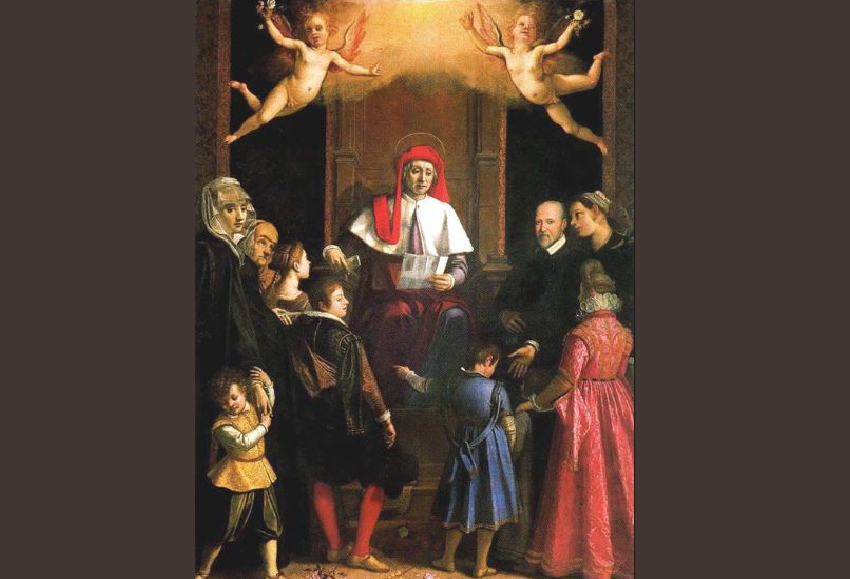 ST. YVO HELORI, descended from a noble and virtuous family near Treguier, in Brittany, was born in 1253. At fourteen years of age he went to Paris, and afterwards to Orleans, to pursue his studies. His mother was won frequently to say to him that he ought so to live as became a Saint, to which his answer always was, that he hoped to be one. This resolution took deep root in his soul, and was a continual spur to virtue, and a check against the least shadow of any dangerous course. His time was chiefly divided between study and prayer; for his recreation he visited the hospitals, where he attended the sick with great charity, and comforted them under the severe trials of their suffering condition. He made a private vow of perpetual chastity; but this not being known, many honorable matches were proposed to him, which he modestly rejected as incompatible with his studious life. He long deliberated whether to embrace a religious or a clerical state; but the desire of serving his neighbor determined him at length in favor of the latter. He wished, out of humility, to remain in the lesser orders; but his bishop compelled him to receive the priesthood,—a step which cost him many tears, though he had qualified himself for that sacred dignity by the most perfect purity of mind and body, and by a long and fervent preparation. He was appointed ecclesiastical judge for the diocese of Rennes. St. Yvo protected the orphans and widows, defended the poor, and administered justice to all with an impartiality, application, and tenderness which gained him the good-will even of those who lost their causes. He was surnamed the advocate and lawyer of the poor. He built a house near his own for a hospital of the poor and sick; he washed their feet, cleansed their ulcers, served them at table, and ate himself only the scraps which they had left. He distributed his corn, or the price for which he sold it, among the poor immediately after the harvest. When a certain person endeavored to persuade him to keep it some months, that he might sell it at a better price, he answered, “I know not whether I shall be then alive to give it.” Another time the same person said to him, “I have gained a fifth by keeping my corn.” “But I,” replied the Saint, “a hundredfold by giving it immediately away.” During the Lent of 1303 he felt his strength failing him; yet, far from abating anything in his austerities, he thought himself obliged to redouble his fervor in proportion as he advanced nearer to eternity. On the eve of the Ascension he preached to his people, said Mass, being upheld by two persons, and gave advice to all who addressed themselves to him. After this he lay down on his bed, which was a hurdle of twigs plaited together, and received the last sacraments. From that moment he entertained himself with God alone, till his soul went to possess Him in His glory. His death happened on the 19th of May, 1303, in the fiftieth year of his age.

Reflection. —St. Yvo was a Saint amidst the dangers of the world; but he preserved his virtue untainted only by arming himself carefully against them, by conversing assiduously with God in prayer and holy meditation, and by most watchfully shunning the snares of bad company. Without this precaution all the instructions of parents and all other means of virtue are ineffectual; and the soul is sure to split against this rock which does not steer wide of it.