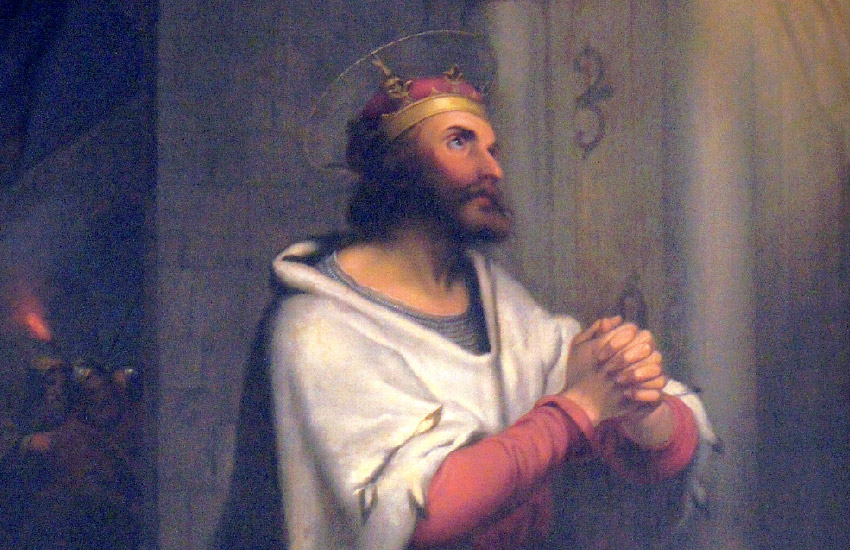 WENCESLAS was the son of a Christian Duke of Bohemia, but his mother was a hard and cruel pagan. Through the care of his holy grandmother, Ludmilla, herself a martyr, Wenceslas was educated in the true faith, and imbibed a special devotion to the Blessed Sacrament. On the death of his father, his mother, Drahomira, usurped the government and passed a series of persecuting laws. In the interests of the Faith Wenceslas claimed and obtained, through the support of the people, a large portion of the country as his own kingdom. His mother secured the apostasy and alliance of her second son, Boleslas, who became henceforth her ally against the Christians. Wenceslas meanwhile ruled as a brave and pious king, provided for all the needs of his people, and when his kingdom was attacked, overcame in single combat, by the sign of the cross, the leader of an invading army. In the service of God he was most constant, and planted with his own hands the wheat and grapes for the Holy Mass, at which he never failed daily to assist. His piety was the occasion of his death. Once, after a banquet at his brother’s palace, to which he had been treacherously invited, he went, as was his wont at night, to pray before the tabernacle. There, at midnight on the feast of the Angels, 938, he received his crown of martyrdom, his brother dealing him the death-blow.

Reflection. — St. Wenceslas teaches us that the safest place to meet the trials of life, or to prepare for the stroke of death, is before Jesus in the Blessed Sacrament.