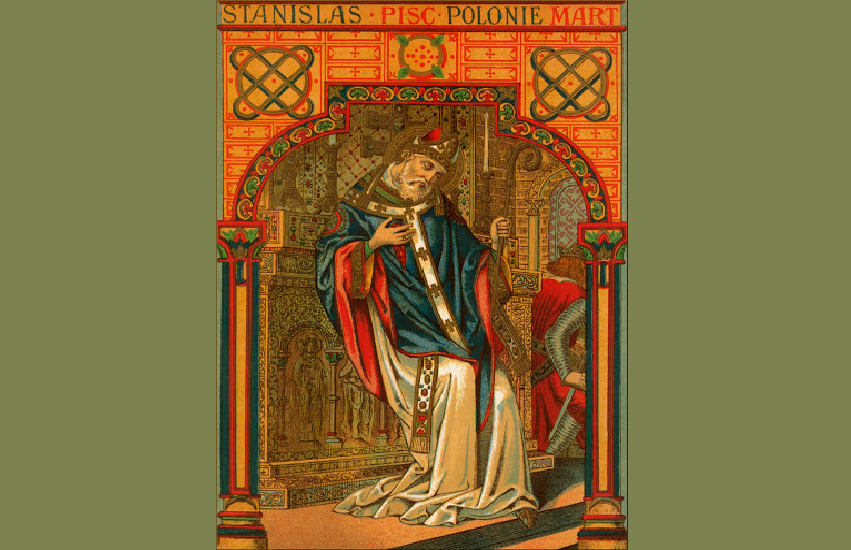 STANISLAS was born in answer to prayer when his parents were advanced in age. Out of gratitude they educated him for the Church, and from a holy priest he became in time Bishop of Cracow. Boleslas II. was then King of Poland—a prince of good disposition, but spoilt by a long course of victory and success. After many acts of lust and cruelty, he outraged the whole kingdom by carrying off the wife of one of his nobles. Against this public scandal the chaste and gentle bishop alone raised his voice. Having commended the matter to God, he went down to the palace and openly rebuked the king for his crime against God and his subjects, and threatened to excommunicate him if he persisted in his sin. To slander the Saint’s character, Boleslas suborned the nephews of one Paul, lately dead, to swear that their uncle had never been paid for land bought by the bishop for the Church. The Saint stood fearlessly before the king’s tribunal, though all his witnesses forsook him, and guaranteed to bring the dead man to witness for him within three days. On the third day, after many prayers and tears, he raised Paul to life, and led him in his grave-clothes before the king. Boleslas made a show for a while of a better life. Soon, however, he relapsed into the most scandalous excesses, and the bishop, finding all remonstrance useless, pronounced the sentence of excommunication. In defiance of the censure, on May 8, 1079, the king went down to a chapel where the bishop himself was saying Mass, and sent in three companies of soldiers to dispatch him at the altar. Each in turn came out, saying they had been scared by a light from heaven. Then the king rushed in and slew the Saint at the altar with his own hand.

Reflection. —The safest correction of vice is a blameless life. Yet there are times when silence would make us answerable for the sins of others. At such times let us, in the name of God, rebuke the offender without fear.