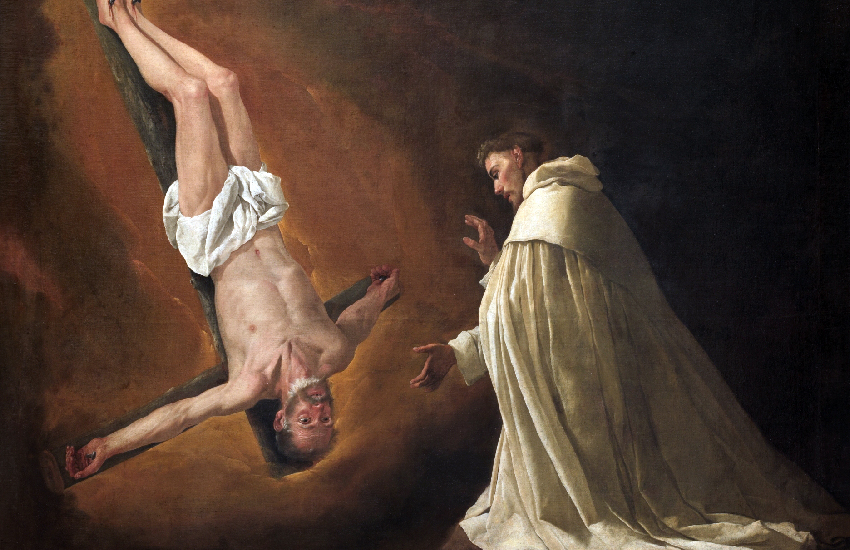 St. Peter was born of a noble family in Languedoc, about 1189. He founded the Order for the Redemption of Captives, and for twenty-five years toiled to release Christian captives from Turkish slavery. Worn out by his labors he died on Christmas Day, 1256.

The two earliest accounts, those written by the mid-fifteenth-century Mercedarian chroniclers Nadal Gaver and Pedro Cijar, declare the founder, the son of a merchant, to be from the French village of Mas-Saintes-Puelles, near the town of Castelnaudary,[6] in the modern department of Aude. A fuller account of his life by Francisco Zumel appeared in 1588 and is the basis for the biography given in the Acta sanctorum.

According to Butler, Nolasco followed Simon de Montfort in the war against the Albigensians. In the Battle of Muret Montfort had defeated and killed King Peter II of Aragon, and took his son James prisoner, a child of six years old and sent him back to Aragon with Nolasco, then twenty-five years old, appointed his tutor.

After making a pilgrimage to Our Lady of Montserrat, Nolasco went to Barcelona where he began to practice various works of charity. Nolasco became concerned with the plight of Christians captured in Moorish raids and that he decided to establish a religious order to succor these unfortunates.

Nolasco began ransoming Christian captives in 1203. In 1218 Raymond of Pennafort started a lay confraternity for ransoming slaves from the Moors and Peter became the procurator for this.[8] Peter’s plan, was to establish a well-structured and stable redemptive religious order under the patronage of Mary.

In 1230 Nolasco became the first Superior and also held the position of Ransomer, the order being concerned with the freeing of Christian prisoners from the Moors. He worked first in the Kingdom of Valencia and then in Granada. He made several other journeys to the coasts of Spain, besides a voyage to Algiers. Saint Raymond Nonnatus later succeeded to this position.

The order originally attracted young noblemen whose heritage equipped them to practically address the matter of ransom, and friars who were in holy orders, and attended the choir. The knights were to guard the coasts against the Saracens, but were obliged to choir when not on duty. Nolasco himself was never ordained priest; and the first seven generals or commanders were chosen out of the knights, though the friars were always more numerous. The founder required of himself and his followers a special vow in addition to the usual three-to devote their “whole substance and very liberty to the ransoming of slaves,” even to the point of acting as hostages in order to free others. According to records, the Order of the Blessed Virgin Mary for the Ransom of Captives accomplished approximately 70,000 rescues-some 2,700 during the founder’s lifetime.

The order elected a habit of white, signifying innocence. Some histories claim that Mary provided such guidance during her appearance to Nolasco. An enthusiastic King James authorized the members to wear- emblazoned on their breasts and long scapulars- his own distinguished arms -of Aragon.

Nolasco died in 1256 in Barcelona, seven years after having resigned as Superior. According to tradition he died on 25 December, but recent studies of the Royal Archives of Barcelona have indicated that he died on 6 May.

Connection for our times: Today we may not experience the same type of slavery, although there are other forms of it to be sure, but we do experience a great slavery to sin and vice. Whether it be to internet temptations, sins of the flesh, or other vices like avarice and envy, our world is a place of constant enslavement to the world, the flesh and the devil. Let us be reminded by this saint that our true freedom from slavery to sin is found through the Sacraments, most notable the Sacrament of Confession and the Holy Sacrifice of the Mass.