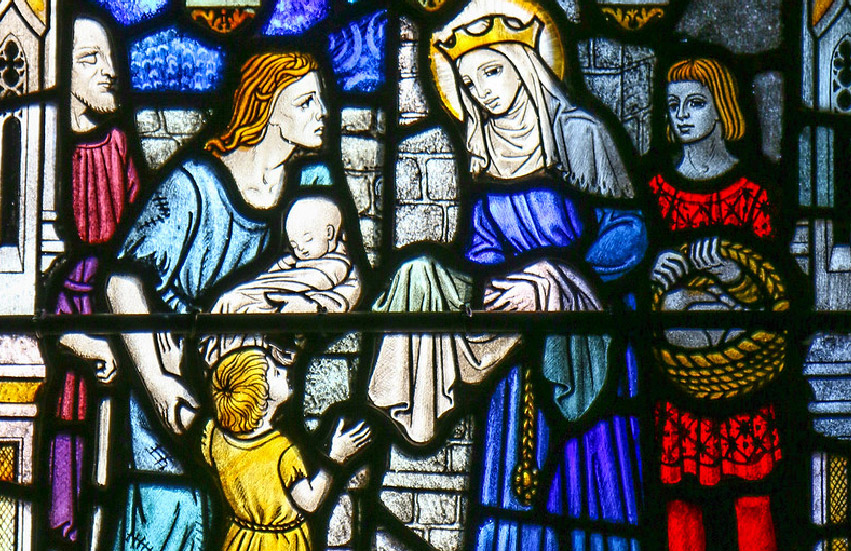 ST. MARGARET’S name signifies “pearl;” “a fitting name,” says Theodoric, her confessor and her first biographer, “for one such as she.” Her soul was like a precious pearl. A life spent amidst the luxury of a royal court never dimmed its lustre, or stole it away from Him who had bought it with His blood. She was the grand, daughter of an English king; and in 1070 she became the bride of Malcolm, and reigned Queen of Scotland till her death in 1093. How did she become a Saint in a position where sanctity is so difficult? First, she burned with zeal for the house of God. She built churches and monasteries; she busied herself in making vestments; she could not rest till she saw the laws of God and His Church observed throughout her realm. Next, amidst a thousand cares, she found time to converse with God—ordering her piety with such sweetness and discretion that she won her husband to sanctity like her own. He used to rise with her at night for prayer; he loved to kiss the holy books she used, and sometimes he would steal them away, and bring them back to his wife covered with jewels. Lastly, with virtues so great, she wept constantly over her sins, and begged her confessor to correct her faults. St. Margaret did not neglect her duties in the world because she was not of it. Never was a better mother. She spared no pains in the education of her eight children, and their sanctity was the fruit of her prudence and her zeal. Never was a better queen. She was the most trusted counsellor of her husband, and she labored for the material improvement of the country. But, in the midst of the world’s pleasures, she sighed for the better country, and accepted death as a release. On her death-bed she received the news that her husband and her eldest son were slain in battle. She thanked God, Who had sent this last affliction as a penance for her sins. After receiving Holy Viaticum, she was repeating the prayer from the Missal, “O Lord Jesus Christ, Who by Thy death didst give life to the world, deliver me.” At the words “deliver me,” says her biographer, she took her departure to Christ, the Author of true liberty.

Reflection. —All perfection consists in keeping a guard upon the heart. Wherever we are, we can make a solitude in our hearts, detach ourselves from the world, and converse familiarly with God. Let us take St. Margaret for our example and encouragement.