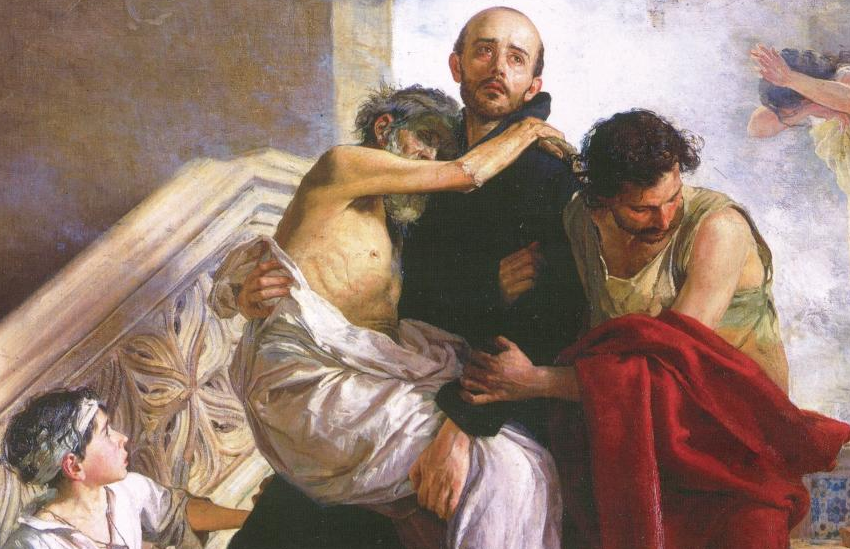 NOTHING in John’s early life foreshadowed his future sanctity. He ran away as a boy from his home in Portugal, tended sheep and cattle in Spain, and served as a soldier against the French, and afterwards against the Turks. When about forty years of age, feeling remorse for his wild life, he resolved to devote himself to the ransom of the Christian slaves in Africa, and went thither with the family of an exiled noble, which he maintained by his labor. On his return to Spain he sought to do good by selling holy pictures and books at low prices. At length the hour of grace struck. At Granada a sermon by the celebrated John of Avila shook his soul to its depths, and his expressions of self-abhorrence were so extraordinary that he was taken to the asylum as one mad. There he employed himself in ministering to the sick. On leaving he began to collect homeless poor, and to support them by his work and by begging. One night St. John found in the streets a poor man who seemed near death, and, as was his wont, he carried him to the hospital, laid him on a bed, and went to fetch water to wash his feet. When he had washed them, he knelt to kiss them, and started with awe: the feet were pierced, and the print of the nails bright with an unearthly radiance. He raised his eyes to look, and heard the words, “John, to Me thou doest all that thou doest to the poor in My name: I reach forth My hand for the alms thou givest; Me dost thou clothe, Mine are the feet thou dost wash.” And then the gracious vision disappeared, leaving St. John filled at once with confusion and consolation. The bishop became the Saint’s patron, and gave him the name of John of God. When his hospital was on fire, John was seen rushing about uninjured amidst the flames until he had rescued all his poor. After ten years spent in the service of the suffering, the Saint’s life was fitly closed. He plunged into the river Xenil to save a drowning boy, and died, 1550, of an illness brought on by the attempt, at the age of fifty-five.

Reflection. —God often rewards men for works that are pleasing in His sight by giving them grace and opportunity to do other works higher still. St. John of God used to attribute his conversion, and the graces which enabled him to do such great works, to his self-denying charity in Africa.