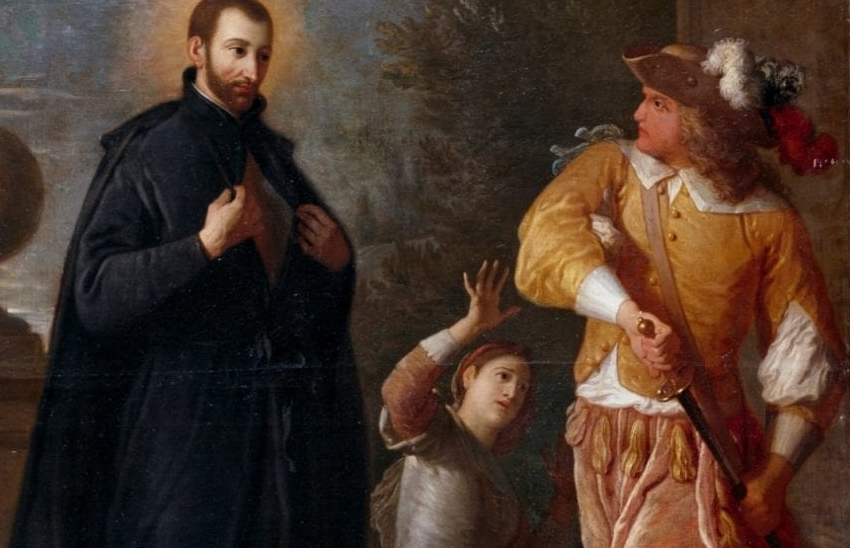 ST. JOHN FRANCIS REGIS was born in Languedoc, in 1597. From his tenderest years he showed evidences of uncommon sanctity by his innocence of life, modesty, and love of prayer. At the age of eighteen he entered the Society of Jesus. As soon as his studies were over, he gave himself entirely to the salvation of souls. The winter he spent in country missions, principally in mountainous districts; and in spite of the rigor of the weather and the ignorance and roughness of the inhabitants, he labored with such success that he gained innumerable souls to God both from heresy and from a bad life. The summer he gave to the towns. There his time was taken up in visiting hospitals and prisons, in preaching and instructing, and in assisting all who in any way stood in need of his services. In his works of mercy God often helped him by miracles. In November, 1637, the Saint set out for his second mission at Marthes. His road lay across valleys filled with snow and over mountains frozen and precipitous. In climbing one of the highest, a bush to which he was clinging gave way, and he broke his leg in the fall. By the help of his companion he accomplished the remaining six miles, and then, instead of seeing a surgeon, insisted on being taken straight to the confessional. There, after several hours, the curate of the parish found him still seated, and when his leg was examined the fracture was found to be miraculously healed. He was so inflamed with the love of God that he seemed to breathe, think, speak of that alone, and he offered up the Holy Sacrifice with such attention and fervor that those who assisted at it could not but feel something of the fire with which he burned. After twelve years of unceasing labor, he rendered his pure and innocent soul to his Creator, at the age of forty-four.

Reflection. —When St. John Francis was struck in the face by a sinner whom he was reproving, he replied, “If you only knew me, you would give me much more than that” His meekness converted the man, and it is in this spirit that he teaches us to win souls to God. How much might
181 Lives Of The Saints By Alban Butler, Benziger Bros. Edition www.globalgrey.co.uk
we do if we could forget our own wants in remembering those of others, and put our trust in God!