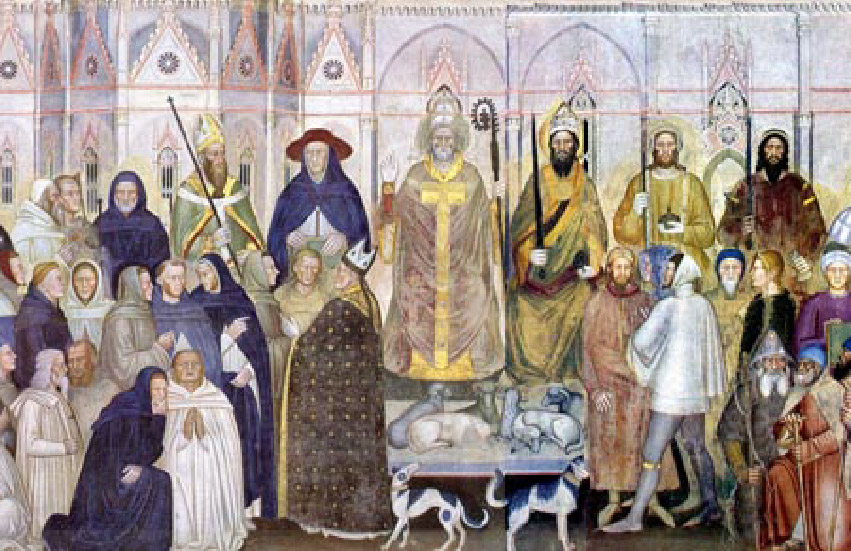 GREGORY VII., by name Hildebrand, was born in Tuscany, about the year 1013. He was educated in Rome. From thence he went to France, and became a monk at Cluny. Afterwards he returned to Rome, and for many years filled high trusts of the Holy See. Three great evils then afflicted the Church: simony, concubinage, and the custom of receiving investiture from lay hands. Against these three corruptions Gregory never ceased to contend. As legate of Victor II. he held a Council at Lyons, where simony was condemned. He was elected Pope in 1073, and at once called upon the pastors of the Catholic world to lay down their lives rather than betray the laws of God to the will of princes. Rome was in rebellion through the ambition of the Cenci. Gregory excommunicated them. They laid hands on him at Christmas during the midnight Mass, wounded him, and cast him into prison. The following day he was rescued by the people. Next arose his conflict with Henry IV., Emperor of Germany. This monarch, after openly relapsing into simony, pretended to depose the Pope. Gregory excommunicated the emperor. His subjects turned against him, and at last he sought absolution of Gregory at Canossa. But he did not persevere. He set up an antipope, and besieged Gregory in the castle of St. Angelo. The aged pontiff was obliged to flee, and on May 25, 1085, about the seventy-second year of his life and the twelfth year of his pontificate, Gregory entered into his rest. His last words were full of a divine wisdom and patience. As he was dying, he said, “I have loved justice and hated iniquity, therefore I die in exile.” His faithful attendant answered, “Vicar of Christ, an exile thou canst never be, for to thee God has given the Gentiles for an inheritance, and the uttermost ends of the earth for thy possession.”

Reflection. —Eight hundred years are passed since St. Gregory died, and we see the same conflict renewed before our eyes. Let us learn from him to suffer any persecution from the world or the state, rather than betray the rights of the Holy See.