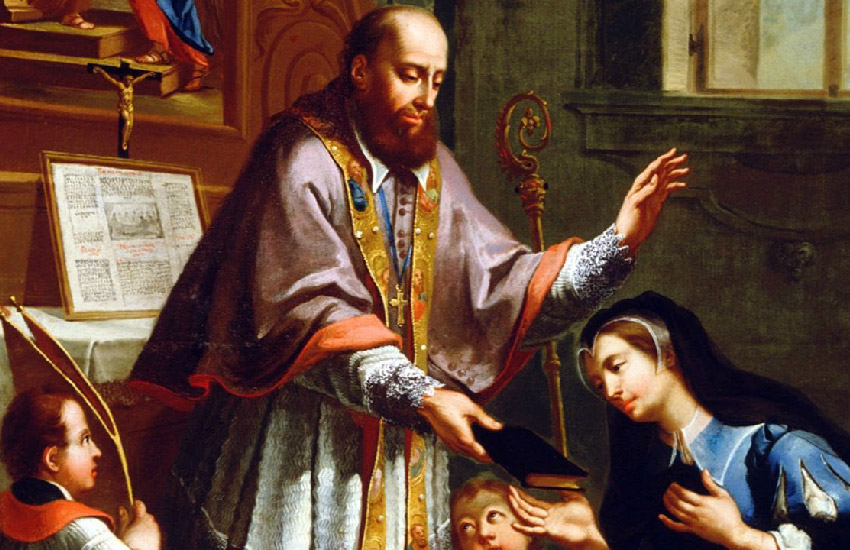 St. Francis of Sales – Bishop, Confessor, Doctor of the Church

FRANCIS was born of noble and pious parents, near Annecy, 1566, and studied with brilliant success at Paris and Padua. On his return from Italy he gave up the grand career which his father had marked out for him in the service of the state, and became a priest. When the Duke of Savoy had resolved to restore the Church in the Chablais, Francis offered himself for the work, and set out on foot with his Bible and breviary and one companion, his cousin Louis of Sales. It was a work of toil, privation, and danger. Every door and every heart was closed against him. He was rejected with insult and threatened with death. But nothing could daunt or resist him, and ere long the Church burst forth into a second spring. It is stated that he converted 72,000 Calvinists. He was then compelled by the Pope to become Coadjutor Bishop of Geneva, and succeeded to the see in 1602. At times the exceeding gentleness with which he received heretics and sinners almost scandalized his friends, and one of them said to him, “Francis of Sales will go to Paradise, of course; but I am not so sure of the Bishop of Geneva: I am almost afraid his gentleness will play him a shrewd turn.” “Ah,” said the Saint, “I would rather account to God for too great gentleness than for too great severity. Is not God all love? God the Father is the Father of mercy; God the Son is a Lamb; God the Holy Ghost is a Dove—that is, gentleness itself. And are you wiser than God?” In union with St. Jane Frances of Chantal he founded at Annecy the Order of the Visitation, which soon spread over Europe. Though poor, he refused provisions and dignities, and even the great see of Paris. He died at Avignon, 1622.

Reflection. —”You will catch more flies,” St. Francis used to say, “with a spoonful of honey than with a hundred barrels of vinegar. Were there anything better or fairer on earth than gentleness, Jesus Christ would have taught it us; and yet He has given us only two lessons to learn of Him—meekness and humility of heart.” you!
Lives Of The Saints By Alban Butler, Benziger Bros. Edition www.globalgrey.co.uk

The city of Geneva in Switzerland is situated at the western end of the forty-five mile long lade of the same name, near the French boundary. In the sixteenth century the Dukedom of Savoy lost this city, as well as the province of Vaud on the north side of the lake and that of Chablais on the south side, to the Calvinists of Switzerland. By giving up his claim to Vaud, the duke of Savoy finally regained Chablais; but the people of the latter province had meanwhile become fanatical Calvinists. The bishop of Geneva resided at Annecy, some twenty miles south of Geneva.

A prominent noble family of Savoy at this time was that of De Sales; and Saint Francis de Sales, who was born in 1567 at the Chateau de Sales, near Annecy, became its most illustrious member. His father had the title to the Signory of Nouvelles by inheritance and that of Boisy by marriage. At baptism, St Francis de Sales received St Francis of Assisi together with St Bonaventure as his patron saints; and after he was appointed coadjutor bishop of Geneva, he had himself enrolled in the Archconfraternity of the Cord of St Francis. Saint Francis de Sales was not a Franciscan Tertiary, but a member of the Third Order of the Minims, founded by St Francis de Paul. However, he accepted affiliation to the First Order of St Francis from the Capuchins in 1617; and his spirit undoubtedly has a close kinship with that of the Seraphic Saint. He once told the Capuchins that he belonged to the Franciscan Order by special ties; and in 1609, the holy bishop, girded with the cord, preached a beautiful sermon and took part in the traditional procession of the arch-confraternity. The Portiuncula Chapel at Assisi was especially dear to Saint Francis de Sales because of the great spiritual favors he received here. At Evian, on the south shore of Lake Gereva, St Francis of Assisi appeared to him and said: “You desire martyrdom, just as I once longed for it. But, like me, you will not obtain it. You will have to become an instrument of your own martyrdom.”

From early youth, Saint Francis de Sales had a great desire to devote himself entirely to the service of God, although his father had other plans for him. With the pious Abbe Deage as his tutor, Francis was a student at the University of Paris from his fourteenth to his twentieth year; and after studying jurisprudence at the University of Padua for four more years, he was awarded the degree of Doctor of Law. In 1593 he finally obtained the consent of his father to enter the sacred ministry; and since he had devoted much time to the study of theology during his student years, he was ordained a priest six months later.

Not long afterwards Saint Francis de Sales volunteered for the difficult and dangerous task of leading the people of the province of Chablais back to the fold of the Church. Several times he miraculously escaped death at the hands of assassins. But he persevered in his heroic and patient efforts, and after four years succeeded in converting a large number of Calvinists. In 1599 he was appointed coadjutor to his bishop; and in 1602 he became bishop of Geneva, a position which he filled in an exemplary manner for twenty years.

Saint Francis de Sales has rightly been styled “the Gentleman Saint” because of his wonderful patience and gentleness. He always tempered his unflagging zeal by imperturbable meekness and kindness. He is a model for every priest and bishop. Though a learned man, he insisted on simple catechizing and preaching and himself set the example. The people came in crowds to hear him preach, not only in Savoy, but also in various cities of France. He began his writing career as a missionary to the Calvinists, by preparing leaflets explaining the principle doctrines of the Church as opposed to the errors of Calvinism. His best known works are: Philothea, or Introduction to a Devout Life and Theotimus, a treatise on the love of God.

At Dijon, in 1604, Saint Francis de Sales became acquainted with St Jane de Chantal, for whom and through whom he founded the nursing and teaching order known as Visitation Nuns. He died at Lyons on December 28, 1622.
The body of the holy bishop was exhumed ten years after his death and was found perfectly preserved. When the body was once again exhumed at a later date, only bones and dust remained.

St Frances de Sales was beatified in 1661, and canonized in 1665. He was declared a doctor of the Church in 1877; and he has been chosen also as the special patron of Catholic journalists and the Catholic press.

Connection for our time: Saint Frances was a master at converting those who had fallen away from the Church. Perhaps many of us have family members or friends who have abandoned their faith, either for a break away denomination, or for no religion at all. The true meekness of Saint Frances reminds us of the expression that “you attract more bees with honey than with vinegar.” Of course he never compromised on the truth of dogma, but his confidence and unyielding faith gave him the countenance he needed to relate to men of all walks of life. Let us pray for deeper humility when speaking about the Catholic faith to others.