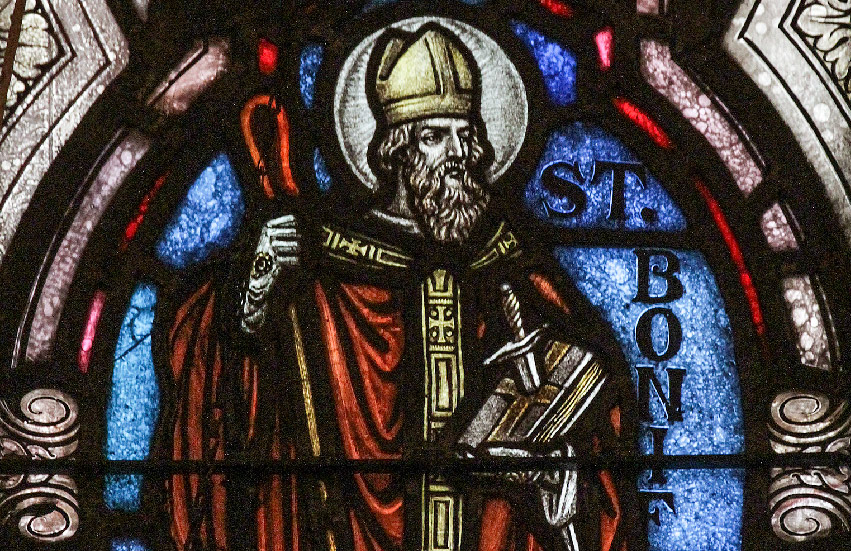 ST. BONIFACE was born at Crediton in Devonshire, England, in the year 680. Some missionaries staying at his father’s house spoke to him of heavenly things, and inspired him with a wish to devote himself, as they did, to God. He entered the monastery of Exminster, and was there trained for his apostolic work. His first attempt to convert the pagans in Holland having failed, he went to Rome to obtain the Pope’s blessing on his mission, and returned with authority to preach to the German tribes. It was a slow and dangerous task; his own life was in constant peril, while his flock was often reduced to abject poverty by the wandering robber bands. Yet his courage never flagged. He began with Bavaria and Thuringia, next visited Friesland, then passed on to Hesse and Saxony, everywhere destroying the idol temples and raising churches on their site. He endeavored, as far as possible, to make every object of idolatry contribute in some way to the glory of God; on one occasion, having cut down on immense oak which was consecrated to Jupiter, he used the tree in building a church, which he dedicated to the Prince of the Apostles. He was now recalled to Rome, consecrated Bishop by the Pope, and returned to extend and organize the rising German Church. With diligent care he reformed abuses among the existing clergy, and established religious houses throughout the land. At length, feeling his infirmities increase, and fearful of losing his martyr’s crown, Boniface appointed a successor to his monastery, and set out to convert a fresh pagan tribe. While St. Boniface was waiting to administer Confirmation to some newly-baptized Christians, a troop of pagans arrived, armed with swords and spears. His attendants would have opposed them, but the Saint said to his followers: “My children, cease your resistance; the long-expected day is come at last. Scripture forbids us to resist evil. Let us put our hope in God: He will save our souls.” Scarcely had he ceased speaking, when the barbarians fell upon him and slew him with all his attendants, to the number of fifty-two.

Reflection. —St. Boniface teaches us how the love of Christ changes all things. It was for Christ’s sake that he toiled for souls, preferring poverty to riches, labor to rest, suffering to pleasure, death to life, that by dying he might live with Christ.