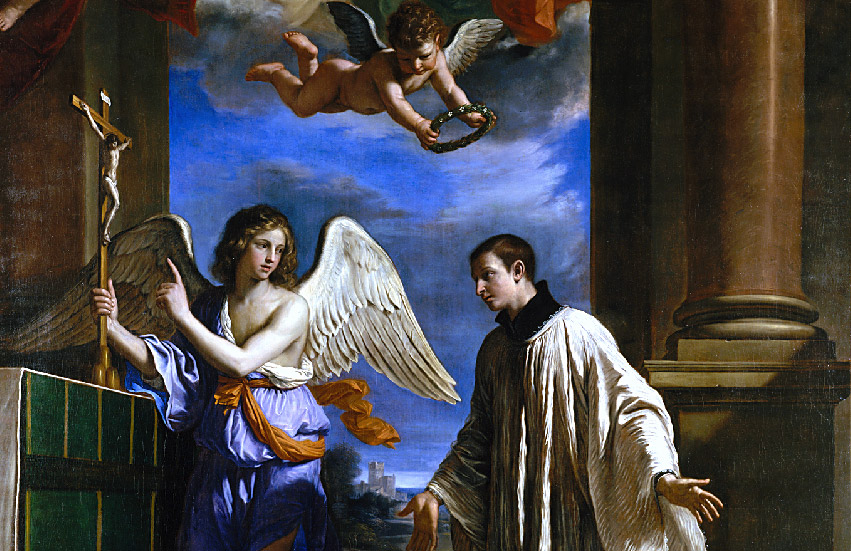 ALOYSIUS, the eldest son of Ferdinand Gonzaga, Marquis of Castiglione, was born on the 9th of March, 1568. The first words he pronounced were the holy names of Jesus and Mary. When he was nine years of age he made a vow of perpetual virginity, and by a special grace was ever exempted from temptations against purity. He received his first Communion at the hands of St. Charles Borromeo. At an early age he resolved to leave the world, and in a vision was directed by our blessed Lady to join the Society of Jesus. The Saint’s mother rejoiced on learning his determination to become a religious, but his father for three years refused his consent. At length St. Aloysius obtained permission to enter the novitiate on the 25th of November, 1585. He took his vows after two years, and went through the ordinary course of philosophy and theology. He was wont to say he doubted whether without penance grace would continue to make head against I nature, which, when not afflicted and chastised, tends gradually to relapse into its old state, losing the habit of suffering acquired by the labor of years. “I am a crooked piece of iron,” he said, “and am come into religion to be made straight by the hammer of mortification and penance.” During his last year of theology a malignant fever broke out in Rome; the Saint offered himself for the service of the sick, and he was accepted for the dangerous duty. Several of the brothers caught the fever, and Aloysius was of the number. He was brought to the point of death, but recovered, only to fall, however, into slow fever, which carried him off after three months. He died, repeating the Holy Name, a little after midnight between the 20th and 21st of June, on the octave-day of Corpus Christi, being Prather more than twenty-three years of age.

Reflection. —Cardinal Bellarmine, the Saint’s confessor, testified that he had never mortally offended God. Yet he chastised his body rigorously, rose at night to pray, and shed many tears for his sins. Pray that, not having followed his innocence, you may yet imitate his penance.