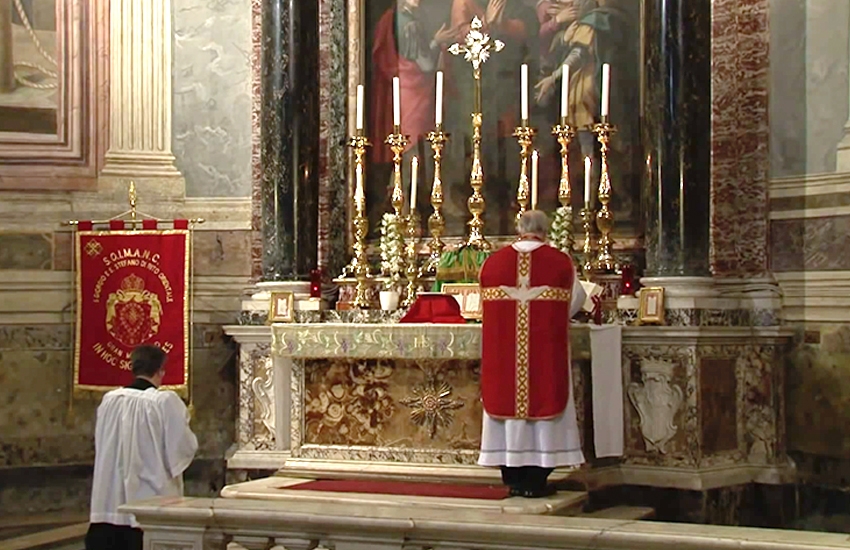 Let the power of the Holy Spirit be present with us, O Lord, both graciously cleansing our hearts and guarding us from all dangers. Through… in the unity of the same.

In those days, when the apostles, who were in Jerusalem, had heard that Samaria had received the word of God, they sent unto them Peter and John. Who, when they were come, prayed for them, that they might receive the Holy Ghost. For he was not as yet come upon any of them; but they were only baptized in the name of the Lord Jesus. Then they laid their hands upon them, and they received the Holy Ghost.

The Holy Ghost shall teach you whatsoever I shall have said to you. Alleluia. (Here all kneel). Come, O Holy Spirit fill the hearts of Thy faithful; and kindle in them the fire of Thy love.

At that time, Jesus said to the Pharisees, Amen, amen I say to you: He that entereth not by the door into the sheepfold, but climbeth up another way, the same is a thief and a robber. But he that entereth in by the door is the shepherd of the sheep. To him the porter openeth; and the sheep hear his voice: and he calleth his own sheep by name, and leadeth them out. And when he hath let out his own sheep, he goeth before them: and the sheep follow him, because they know his voice. But a stranger they follow not, but fly from him, because they know not the voice of strangers.

This proverb Jesus spoke to them. But they understood not what he spoke to them. Jesus therefore said to them again: Amen, amen I say to you, I am the door of the sheep. All others, as many as have come, are thieves and robbers: and the sheep heard them not. I am the door. By me, if any man enter in, he shall be saved: and he shall go in, and go out, and shall find pastures. The thief cometh not, but for to steal, and to kill, and to destroy. I am come that they may have life, and may have it more abundantly.

May the offering of the gift here before Thee, we beseech Thee, O Lord, purify us and render us worthy of its sacred participation. Through… in the unity of the same.

The Spirit Who preceedeth from the Father, alleluia. He shall glorify Me, alleluia, Alleluia.

May the Holy Spirit, we beseech Thee, O Lord, renew our minds with the divine sacrament, for He is the remission of all sins. Through… in the unity of the same.