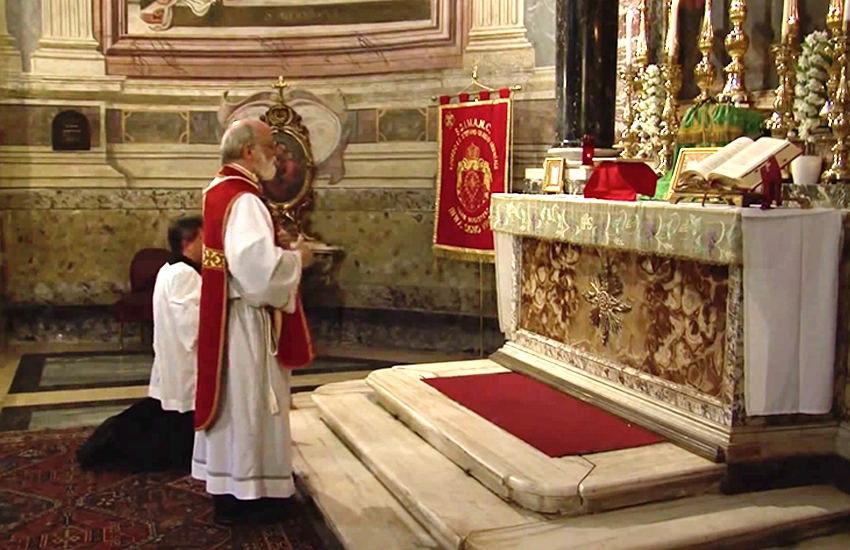 He fed them with the fat of wheat, alleluia; and filled them with honey out of the rock, alleluia, alleluia. Ps. 80, 3. Rejoice to God our helper; sing aloud to the God of Jacob.   Glory be …

O God, Who didst give the Holy Spirit of Thine apostles, grant to Thy people the effect of their pious petition, and, as Thou hast given us faith, bestow also upon us peace. Through… in the unity of the same.

In those days, Peter opening his mouth, said: men, brethren, the Lord commanded us to preach to the people, and to testify that it is he who was appointed by God, to be judge of the living and of the dead. To him all the prophets give testimony, that by his name all receive remission of sins, who believe in him. While Peter was yet speaking these words, the Holy Ghost fell on all them that heard the word. And the faithful of the circumcision, who came with Peter, were astonished, for that the grace of the Holy Ghost was poured out upon the Gentiles also.

For they heard them speaking with tongues, and magnifying God. Then Peter answered: Can any man forbid water, that these should not be baptized, who have received the Holy Ghost, as well as we? And he commanded them to be baptized in the name of the Lord Jesus Christ.

The apostles spoke in divers tongues the wonderful works of God. Alleluia. (here all kneel). Come, O Holy Spirit, fill the hearts of Thy faithful; and kindle in them the fire of Thy love.

At that time, Jesus said to Nicodemus, God so loved the world, as to give his only begotten Son; that whosoever believeth in him, may not perish, but may have life everlasting. For God sent not his Son into the world, to judge the world, but that the world may be saved by him. He that believeth in him is not judged. But he that doth not believe, is already judged: because he believeth not in the name of the only begotten Son of God. And this is the judgment: because the light is come into the world, and men loved darkness rather than the light: for their works were evil. For every one that doth evil hateth the light, and cometh not to the light, that his works may not be reproved. But he that doth truth, cometh to the light, that his works may be made manifest, because they are done in God.

The Lord thundered from heaven, and the Highest gave His voice; and the fountains of waters appeared, alleluia.

Graciously sanctify these gifts, we beseech Thee, O Lord, and, accepting the offering of the spiritual sacrifice, perfect us as eternal offering to Thee. Through… in the unity of the same.

Be present, we beseech Thee, O Lord, with Thy people and defend against the fury of the enemy those whom Thou hast imbued with heavenly mysteries. Through… in the unity of the same.